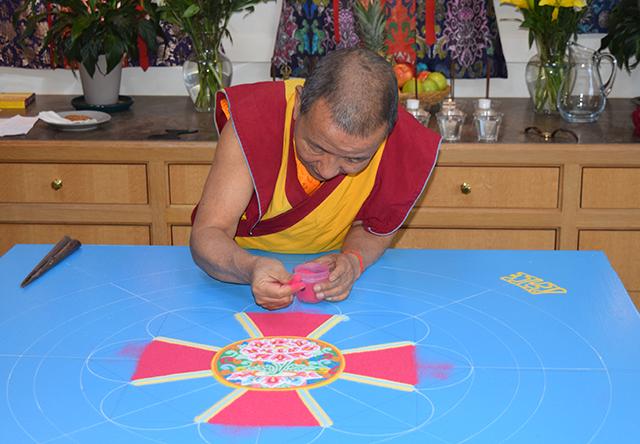 At the Ross School on Monday, the Venerable Tenzin Yignyen, a.k.a. Lama Tenzin, began work on the mandala he uses to illustrate themes that include compassion and impermanence.
By Christopher Walsh

“Who remembers meditating with Lama Tenzin last year?”Second graders at the Ross School raise their hands before darting to a wall, assuming the lotus position, and entering a post-lunch meditation, eyes closed, upturned hands resting on knees, a blissful expression across every face. “Looks like they can meditate for an hour!” the monk beamed. “Am I right? Close your eyes, sit still, and take a deep breath. . . . How peaceful they are. That’s great, I like you guys. Looks like they can meditate for two hours!” “Correct,” said one. The Venerable Tenzin Yignyen, a Buddhist monk and professor, has returned to the Ross School in East Hampton for a weeklong visit to share the message of compassion and give the community an opportunity to learn about the principles of Buddhist philosophy, including mindfulness, meditation, and boundless compassion for all beings.He does this each year through the creation of a sand mandala, a multicolored geometric composition that, upon its completion, is then dismantled, its sand poured into a body of water as a reminder of impermanence.Lama Tenzin will give a free public lecture on the tenets of Buddhism, and how it can be practiced in daily life, tonight at 6 in the lecture hall in the school’s senior building. At age 2, Lama Tenzin fled Tibet with his parents and siblings when Chinese forces, which had occupied the independent country since 1950, crushed an uprising. Along with the Dalai Lama, the spiritual and onetime political leader of the Tibetan people (he relinquished a formal role in the Tibetan government in exile in 2011), he lived in exile in Dharamsala, India. He studied at the Namgyal Monastery, the Dalai Lama’s personal monastery in Dharamsala, and in 1995 was selected to teach at the monastery’s North American seat in Ithaca, N.Y. He is now a professor of Tibetan Buddhist studies at Hobart and William Smith Colleges in Geneva, N.Y. “Whenever I have extra time,” he said on Monday, “I visit many, many schools to do the mandala, to plant a seed in the younger generation’s mind that happiness and world peace and compassion are very important in our individual life, family life. . . . I try to use the mandala as a tool or medium to express these things to the young kids.”He has used the mandala to spread the message of compassion at yoga ashrams, art galleries, museums, nursing homes, and hospitals, he said. As an educator, Lama Tenzin adeptly tailors the message to the audience. “It’s based on their level,” he said. “It’s good to put some seeds there, like the word ‘compassion.’ They don’t use that in their day-to-day lives.”The seed takes root, he said. “They are very good. When I ask them, ‘What is compassion?’ they say, ‘Kind, be caring.’ So our next generation will work for peace.” Compassion and kindness are needed “whether you believe in religion or not. We should teach these human basic values. Then, on top of that, you can teach other things” — traditional scholastic pursuits — “as well.” To a group of fifth-grade students, he explained that the mandala was more than a work of art. He spoke of patience, focus, and concentration, and said that with hard work anything can be achieved.Hand in hand was the message that technology is no panacea, that “too much use of technology makes you stupid.” The mind, he said, “is the best computer in the world.”Lama Tenzin will complete the mandala this afternoon. Tomorrow morning, it will be dismantled after a short ceremony and ritual. Students will brush the sand into a vase, and it will be offered to the waters of Long Beach in Noyac. “Nothing lasts forever,” the monk said. “Everything is impermanent. Enjoy your life. Use it or lose it. Don’t complain every day. Sometimes, just smile.”