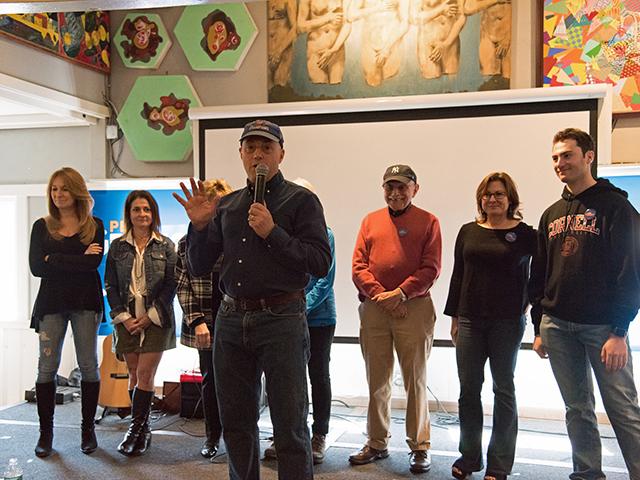 Perry Gershon announced his intention to seek a 2020 rematch with Representative Lee Zeldin at Painters’ restaurant in Brookhaven on Saturday.
By Christopher Walsh

Perry Gershon, an East Hampton resident who narrowly lost a race to unseat Lee Zeldin to represent New York’s First Congressional District in November, wants another chance to defeat the third-term Republican. On Saturday in vote-rich Brookhaven, he formally launched a campaign to win the Democratic Party’s nomination for the seat. Mr. Gershon lost to Mr. Zeldin by 51.5 percent to 47.4 percent, two years after the incumbent easily held off a challenge by former Southampton Town Supervisor Anna Throne-Holst, a race Mr. Zeldin won by 16 points. “When you take a 16-point loss the prior term and then lose by 4, you’re supposed to run again,” Mr. Gershon told The Star on Monday. “Particularly since nobody had heard of me before.” A political newcomer in 2016, Mr. Gershon bested four other candidates in winning the Democratic nomination. He also won the support of the Democratic Congressional Campaign Committee, the party’s campaign arm for the House of Representatives, which included him on its Red to Blue list of top-tier candidates to which it provides financial and organizational support.“I know they’re very interested in this race,” he said of the committee. “I’m talking to them very frequently, so I know we are one of the target races.”Indeed, the committee issued a statement on Monday criticizing Mr. Zeldin for backing President Trump during the 35-day federal government shutdown in December and January. “As Washington Republicans held the salaries of 800,000 American workers ransom,” the statement said, “Zeldin was complicit, rubberstamping an agenda that threatened the safety, security, and economic prosperity of families in New York.”History, despite three consecutive wins for Mr. Zeldin, suggests a winnable race, Mr. Gershon said. Former Suffolk County Executive Patrick Halpin, who introduced him at his campaign launch on Saturday, lost his initial race for State Assembly and for county executive, he said, and former NY-1 Democratic Representatives Otis Pike and George Hochbrueckner needed two election cycles to win. Since 1946, the district has swung between Republicans and Democrats.“Perry, you have to run again, because we need you,” Mr. Halpin told Mr. Gershon at the campaign launch, according to a statement issued by Mr. Gershon’s campaign. “We need someone who’s going to fight.”“There’s a message my campaign had that is equally important today as it was before,” Mr. Gershon said. “It hasn’t gone away. That’s the real reason for doing this, the same reason why I was doing it before.”Key issues for the district, he said, include the economy and taxes, particularly the 2017 Republican-led tax overhaul that capped the deduction for state and local taxes at $10,000. Mr. Zeldin voted against the bill, but, Mr. Gershon said, “Regardless of his vote, his party was in control and pushed for the Republican tax plan. He bears responsibility for it.”The environment is also a front-burner issue, he said, one that includes water quality, climate change, and coastlines, as well as the potential for the district to become a green energy hub. “Lee Zeldin is totally on the wrong side on that,” he said. Health care is a third important issue, he said, one that took center stage in the 2018 midterm elections, in which Democrats gained 40 seats and retook a majority in the House of Representatives. “Lee Zeldin voted to take away health care for people with pre-existing conditions,” he said. “While he gives lip service . . . his record couldn’t be more clear.” Mr. Gershon also took Mr. Zeldin to task for what he considers selective outrage over alleged anti-Semitism. The congressman has been harshly critical of Representative Ilhan Omar of Minnesota, one of two Muslim women elected last year. Republicans and Democrats alike have criticized Ms. Omar for statements made on Twitter related to Israel. Mr. Zeldin, one of two Jewish Republicans in Congress, “jumped at the opportunity, in my opinion, to use anti-Semitism to divide the Democratic Party,” said Mr. Gershon, who also is Jewish. “There was probably a lot of what he said that was factually correct, but he did not and does not apply the same standards to people of his own party when they express anti-Semitism. That, to me, is the real fallacy. He wants to hold Ilhan Omar to a standard, but why not Louie Gohmert,” a Texas Republican who has been accused of anti-Semitic statements about the liberal philanthropist George Soros, “or a series of them,” referring to other Republican legislators. He cited Representative Mo Brooks, a Republican of Alabama, who last month read from Adolf Hitler’s “Mein Kampf” in comparing congressional Democrats to Hitler. “Not a word on that,” Mr. Gershon said of Mr. Zeldin. Mr. Zeldin has not formally declared his intentions, but has now defeated three Democrats: former Representative Tim Bishop, in 2014, Ms. Throne-Holst, and Mr. Gershon. “Right now, Congressman Zeldin’s focus far and away is on his job representing his constituents of NY-1,” Katie Vincentz, a spokeswoman for the congressman, said via email on Monday. “He’s committed to delivering results, and, whether it’s ensuring East End employers have the work force they need or bolstering our communities’ maritime infrastructure, his effectiveness is indisputable. In continuing to deliver for hard-working Long Islanders, he’s fighting to drive down the cost of living, fully fund the 9/11 Victim Compensation Fund, and so many other important issues, not obsessing over an election over a year and a half away.”But Mr. Gershon is confident in his prospects for 2020. “We had 200 people at our announcement event” on Saturday, he said. “That is, I believe, quite a substantial statement of support — getting 200 people from multiple parts of the district. We had representation from every town. That tells me there’s something there. . . . A lot of my supporters from the last go-round are on board, which makes me feel pretty good.”