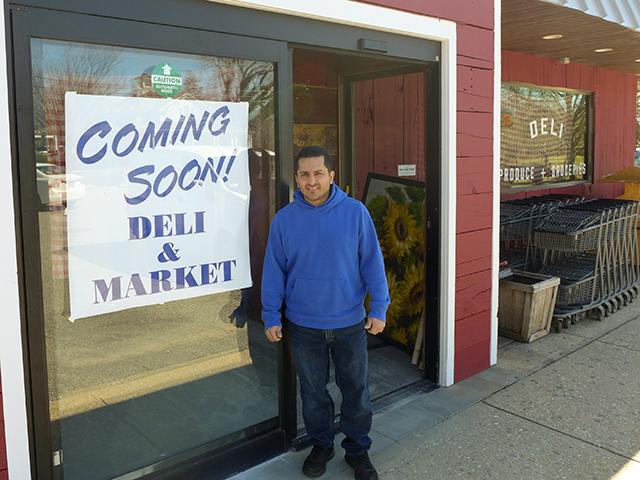 Klever Lopez is getting ready to open a new food store on Race Lane in East Hampton Village.
By Jamie Bufalino

A new food store will be opening soon at the former site of the Hampton Market Place on Race Lane in East Hampton Village. Klever Lopez, the owner of Inter-Deli on Pantigo Road and previously a chef at John Papas Cafe, where he worked for 21 years, is now readying the 4,000-square-foot space to accommodate a salad bar, a steam table for prepared foods, a sandwich counter, plus stations for baked goods, fresh juice, and ice cream. East Hampton Market, as it will be called, will also carry produce and grocery staples. “We’re going to try to make everybody happy,” said Mr. Lopez. Much of the prepared fare at Inter-Deli is Spanish, but this store, he said, will offer a multinational mix. “We’ll have all different types of sandwiches, from egg salad to gyros, and there will be chicken Francese, and salmon teriyaki, and I’m waiting for an exhaust fan for the grill, so if somebody wants a cheeseburger, I can cook it right there,” he said.Those looking for Spanish dishes, however, will not be disappointed, he said. The store will also carry produce like yucca that can be hard to find at American markets, and, at his store’s coffee station, a potent Chilean brand will be served. “It’s really good coffee. I love it,” he said. Mr. Lopez has not yet set an opening date. He’s still debating how much staff he’ll need to hire, what the hours of operation will be (right now, he’s thinking 6 a.m. to either 7 or 8 p.m.), and construction of the interior is still underway. “I’m taking it little by little,” he said. As far as pricing goes, he insists it won’t be “crazy.”Four years ago, when he decided to leave his job at John Papas Cafe to open Inter-Deli, he was extremely nervous about investing his entire savings into that venture, he said. This time around he’s more confident in his business prowess, and he will have plenty of support from his family. Although he plans to do most of the cooking, his wife, Norma, will be on hand to help out, he said, and his daughter, Karla, a college student, will take care of the bookkeeping. The man who was his boss for many years is also cheering him on. “I mentored him as a chef and in life, and I’m very proud of him,” John Papas said. “I wish him well.” “It’s a big job,” Mr. Lopez said of opening his new place. “But I have people at my back.”