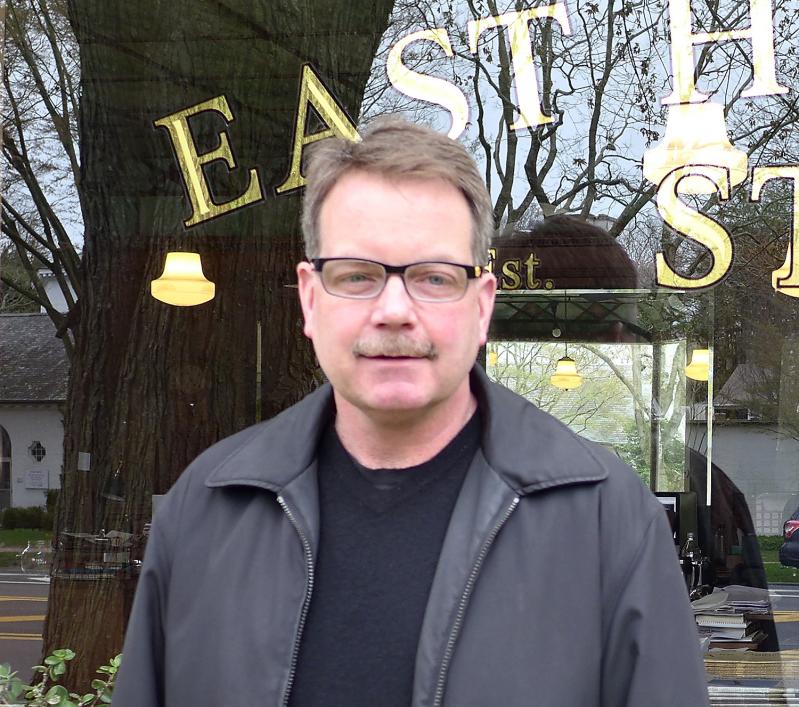 After kicking off his campaign for mayor of East Hampton Village last week, Jerry Larsen visited The Star to discuss his platform.
By Jamie Bufalino

The 2020 campaign for mayor of East Hampton Village got underway surprisingly early last week when Jerry Larsen, a former village police chief, announced his candidacy more than a year before June 2020’s Election Day. Mr. Larsen is the first person to announce his candidacy for the position, which has been held by Mayor Paul F. Rickenbach Jr. since 1992. Mr. Rickenbach’s decision not to seek another four-year term is reported separately.“I wanted to start early so I could engage part-time and full-time residents and make it a meaningful election,” Mr. Larsen said on Friday. “If I’m not the right guy, so be it. But let’s give people a fair shot at deciding who the right person is. Who has the ideas? Who’s got the experience?”Mr. Larsen and his wife, Lisa, live on Newtown Lane. He grew up in the village and began working as a traffic control officer with the Police Department in 1983. He was appointed chief in 2003, and served for 14 years before retiring in 2017.Mr. Larsen said he is motivated to run for mayor because the village board has been “stuck in a rut” rather than offering innovative ideas. “They’re not moving anything forward. They’ve earned the reputation as the village of no. Some people think if it ain’t broke don’t fix it. I’m against all of that,” he said. In addition, Mr. Larsen said the board had been talking about revitalizing the business district for years. The subject came up at a meeting in January, he said, with a plan discussed about hiring a consultant to offer guidance on how best to provide sewage treatment, increased parking, and more affordable housing in the downtown area.“They were going to put out a request for proposals. Well, I haven’t seen the R.F.P., so I don’t think anything’s moving forward,” Mr. Larsen said. Last month, Barbara Borsack, a member of the village board, told The Star the board was still deciding on the parameters for such a study. Mr. Larsen said he had already developed a plan to build a centralized sewer system in a way that won’t cost taxpayers any money. He also has plans to increase parking and affordable housing, but he didn’t want to provide details just yet. “I don’t want to let the cat out of the bag,” he said. Although he praised the board’s recent law requiring low-nitrogen wastewater treatment systems for all new residences and existing ones that expand by 25 percent or have an increase in the number of bedrooms, he said the legislation should have been passed years ago. “The town has been talking about this for, what, 20 years?” he asked. Improving the cleanliness of village beaches is a major tenet of Mr. Larsen’s campaign, and he was dismissive of the board’s decision to initiate a pilot program this summer that will test whether removing garbage cans from the beach would reduce the amount of trash people leave behind.“I think that’s insulting people’s intelligence,” Mr. Larsen said. He favors either removing the receptacles from the beach or having them emptied more often, particularly at night, when refuse from beach parties accumulates. During his tenure as police chief, he said, he had recommended hiring someone to empty the cans between 5 p.m. and midnight. “At midnight you make the last run, and from midnight till 6 a.m. when the Highway Department comes in, I doubt you’re going to get enough garbage to overflow those cans. Then you’re not going to have the issue. It’s simple,” he said.   Mr. Larsen also said he was against the proposed law to ban the use of gas-powered lawn equipment during the summer. “This legislation is coming too fast. It will put an undue burden on small landscaping companies to buy expensive equipment to use for just three months.”  More generally, he also thinks the village code should be updated. The code, he said, contains too many outmoded restrictions, ranging from prohibiting live music in restaurants to not allowing residents to hitch a team of horses to a tree. “Why can’t we have live music?” he asked. “Not allowing amps is fine, but everywhere else you go in the world where people are on vacation you’re going to find a place that has live music. We need to start changing these things. We can have 21st century amenities without losing the historic value of our village.”He and his wife own Protec Security Services, which provides property management and security services for residential and commercial buildings.In August of 2017, the company filed a federal lawsuit against Mayor Rickenbach and Richard Lawler, a trustee. The suit claimed that the mayor, who is a retired East Hampton Village police officer, and Mr. Lawler, the village’s police commissioner, abused their positions by prohibiting Mr. Larsen from taking outside security work in the village while they were engaged in businesses that provided such services. The suit was dismissed last September on the basis of the statute of limitations.Speculating about the coming campaign and potential rivals, Mr. Larsen said he was looking forward to debating Mr. Lawler, whom he expects to declare his candidacy soon. “I’m sure a question will be asked, ‘How can you shut Jerry’s business down and keep your own business open?’ ” he said. “That’s a question that needs to be asked. I never got that far in our lawsuit.”