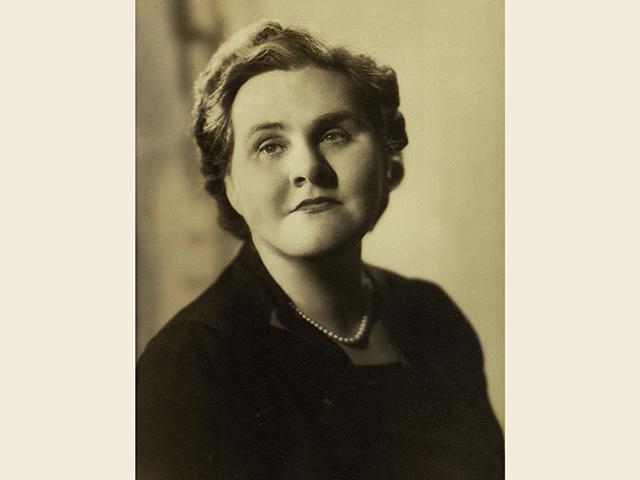 The Long Island Collection at the East Hampton Library is filled with many curious things, all of which have a story. Occasionally, visitors will ask questions about items in our display case or portraits hanging on the wall. In the Mumford Room, researchers are immediately met with the gaze of Gertrude Mumford (1875-1942), whose portrait floats above the Moran chest against the wall. The room was named for her on behalf of her daughter, Dorothy Quick (1896-1962), who was the single largest donor to the building fund that later opened the room on Aug. 30, 1946.Known as Mrs. John Adams Mayer in the portrait seen here, Dorothy Quick was born in Brooklyn in 1896, the only child of Henry Stanhope Quick Jr. (1867-1935) and Emma Gertrude Aaron (a.k.a. Gertrude Mumford). In 1907, while traveling to New York aboard the S.S. Minnetonka from England with her mother and grandparents, 11-year-old Dorothy met the American writer Mark Twain, who had just received an honorary degree from Oxford University.“It was the beginning of a friendship that was to last until the very day of his death,” in 1910, Dorothy later recalled.Later in 1907, Twain sent Dorothy a telegram asking if she’d like an elephant or 10,000 monkeys for her birthday. When Dorothy replied that she would prefer his books, he sent them with a tiny white elephant that would inspire her lifelong interest in collecting elephant figurines (some of which used to be on display in the library).Through this friendship, Twain also encouraged Dorothy’s desire to become a writer, which she eventually did, producing several volumes of poetry and mystery novels. She also wrote columns for The East Hampton Star titled “What’s New in New York” and for The Sag Harbor Express and The County Review in Riverhead called “Quick Look at Things.”A year before her death, Dorothy published a memoir, “Enchantment: A Little Girl’s Friendship With Mark Twain.” Though they knew each other just a few short years, it’s clear how big an impact Twain had on her life and career.Gina Piastuck is the department head of the East Hampton Library’s Long Island Collection.