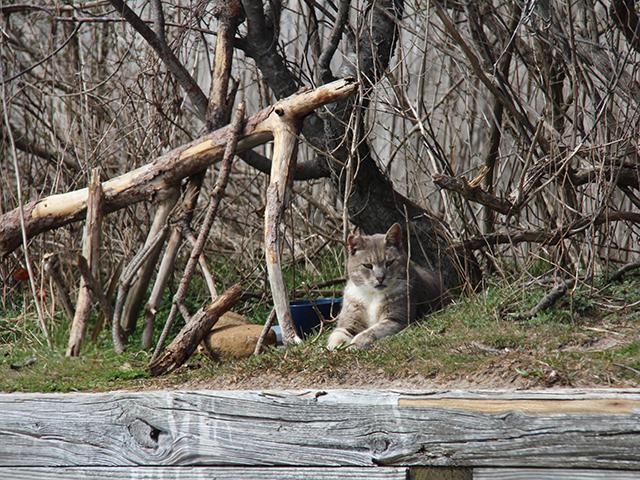 A lone male is all that remains of a beachside feral colony in East Hampton that has been tended to by volunteers from the Animal Rescue Fund of the Hamptons’ Operation Cat.
By Johnette Howard

Most people don’t know it, but there are cat capers happening right under their noses all over the South Fork. Some sound like cloak-and-dagger operations, not just missions of mercy. Patience, stealth, and a little ingenuity are required, says Laurin Copen, one of the many volunteers who participate in the “T.N.R.s” done by “Op Cat” — the Animal Rescue Fund of the Hamptons’ shorthand for the Trap/Neuter/Return strategy that its Operation Cat program employs to reduce feral cat colonies from Montauk to Speonk.For all the successes of the 22-year-old program — more than 25,000 cats have been spayed and neutered in the Towns of East Hampton, Southampton, and Brookhaven, by ARF’s count — Ms. Copen is nonetheless consumed lately by the one that got away. Twice.Bad kitty.“It’s me against this cat now,” Ms. Copen said last week with a laugh. “I’ve been doing this for years. Some of them are very smart and can get out of traps and stuff. They’re very wary. When they’re kittens they’re incredibly stupid and just go, ‘Ooh! Food! Okay!’ They’re incredibly cute and naive and they just go walking right in the trap. But recently I had this one cat with three babies that I trapped twice, and both times it got away. The second time, I lifted the sheet off the trap and it was gone. Just gone.”But Ms. Copen isn’t giving up. And such persistence pays, said Rita Del Rey, ARF’s Operation Cat coordinator. (“And yes, that’s my title on my business card,” she said, laughing.) Ms. Del Rey said there are numerous reasons why reducing the feral cat population is important. Cats can begin having litters as early as six months of age, and just one mating pair of unmanaged feral cats and their offspring can produce thousands of cats in a 10-year span.“With this program we have healthier ferals — we also call them community cats — and they have healthier and happier lives,” Ms. Del Rey said. “The population of the colonies themselves should also go down.”ARF’s network of Operation Cat volunteers provides food, water, and shelter for more than 1,000 cat colonies on the East End, ranging in size from two to 30 cats. The ­Continued from A1caretakers tend to the colonies with at least one daily visit. Still other residents, such as Tom Friedman of East Hampton, take the initiative to help feral cats on their own.“All I do is rub his head and feed him now and again — I’ve been doing it for years,” said Mr. Friedman, who tends to the lone remaining cat in an East Hampton beach colony that has dwindled from five to just one regular cat. A second sometimes shows up during the winter. “The one that is there all year went from being totally standoffish to being friendly now with me. But wary.” Asked if he was ever tempted to give the cat a name, Mr. Friedman said, “I have no desire to name a cat that doesn’t care. So no. And I say that only because my cat at home has a name — Abby, a beautiful cat it is — and it doesn’t come when you call it. So what’s the difference?”In addition to providing tips on how to correctly approach and care for the cats, ARF will teach its volunteers how to safely and humanely trap them wherever they are — beaches, barns, neighborhoods, open farm fields. ARF sometimes even lends out the box traps.The great majority of captured feral cats are then taken to ARF’s adoption center in Wainscott, where they are fixed, vaccinated, and released back to their colonies. But ARF also has a mobile van where some spaying and neutering is done in the field. Each altered cat also leaves with its left ear notched to identify it so it is not mistakenly trapped again.Two of the many important things ARF tells its Op Cat workers to keep in mind are that most feral cats are not comforted by being handled, so beware, and never leave a trap unattended overnight. The cat could suffer. Or, by morning, there could be a raccoon or opossum inside instead.“Truly unpleasant for all parties,” the ARF website notes.ARF also tries to socialize the very young kittens that are dropped off from feral cat colonies, and occasionally makes some young adult cats available for adoption placement after they are vaccinated and fixed.“We have people that call that have moles and voles that are destroying their yard, but they don’t want to use pesticides so they come to us,” Ms. Del Rey said.ARF never publicly discusses exactly where the cat colonies are because that could attract people looking to engage, disturb, or even harm the animals. “Then there’s the whole piping plover issue,” Ms. Del Rey said. “This is the time of the year we get calls from the piping plover activists about the cats being potential predators.”This year ARF already has spayed or neutered 314 cats, 71 of them from the Towns of East Hampton and Southampton. Ms. Del Rey and Ms. Copen both said they know success stories in which feral cat colonies have been reduced from as many as 15 cats to one or two. Still, Ms. Copen remains on the hunt for that one that got away. Woman vs. Cat III. The Trilogy.“If they’ve never been trapped before it’s much easier, but if you have to trap the same one again? Hmm,” Ms. Copen said. “There are all these little tricks. You can skip feeding them the night before so they’re hungry the next morning and walk into the cage. Or you can make a line of cat treats, but if you put out too many they get full before they even get in the trap.” ARF has posted a helpful list of five tips called “Trapping and Transporting” on its website (arfhamptons.org). Tip number one, “Bait the Trap,” reads: “The best bait we have found is canned mackerel. It’s very smelly.” Consider yourself warned, Cat Ops.