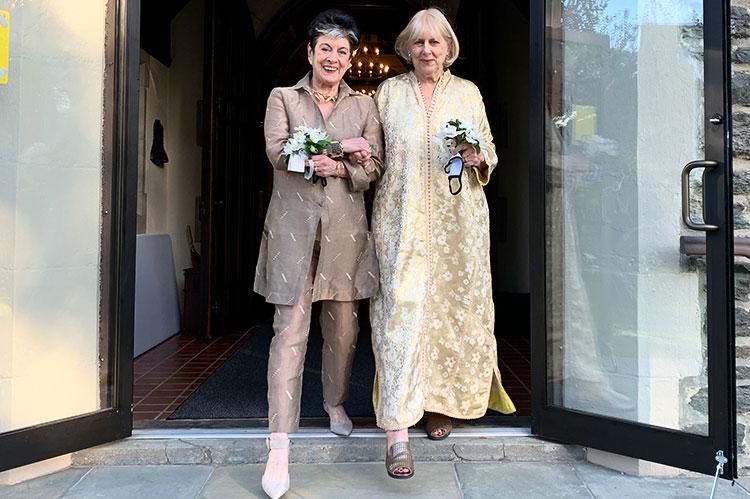 Lys Marigold and Dianne Benson of East Hampton Village were married on Saturday in a small ceremony at St. Luke's Episcopal Church by the Very Rev. Denis C. Brunelle, who celebrated the wedding Mass at 5 p.m.

Ms. Marigold and Ms. Benson were the first couple to be married in person at St. Luke's in almost a year, even though theirs was a tiny wedding compared to those in a pre-Covid wedding season. They had been together for nearly 19 years when Ms. Marigold "popped the question" on Ms. Benson's birthday at the end of July at Nick and Toni's "with their treasured friends, Ralph Gibson and his fiance, Christopher Mason," she said.

Ms. Benson was wearing an Indian-style tunic and pants that she had custom made in a metallic cloth, designed by Jack Lenor Larsen, and Ms. Marigold was wearing a gold-and-white "wedding caftan" given to her by her father years ago when they vacationed in Morocco, when she was in her early 20s.

The bouquets of orchids and roses they carried were sent by their stepchildren, Marc Benson of San Francisco and Sonoma, Calif., and Wendy Benson of Miami, with a "beautiful love quote" attached from Maya Angelou's writing.

Each wore a mask that said "Bride."

Matko Tomicic, the executive director of the LongHouse Reserve in East Hampton, was Ms. Benson's witness and Ms. Marigold's daughter, Skye Qi Marigold, 25, was her witness.

Ms. Marigold is a magazine writer who has also written several books and is an amateur archaeologist, having participated in excavations of Petra in Jordan. Ms. Benson called her "an encyclopedia of information, a historian and collector of facts, art, and artifacts." She has served on the East Hampton Village Zoning Board for a dozen years, the last two as chairwoman, and is a new member of the East Hampton Historical Society board. She has been a member of the Ladies Village Improvement Society for decades, "originating the Gibson Girl posters" and coming up with the theme for the organization's summer fair for years.

Ms. Benson had a well-documented career in the Manhattan fashion and art world "when fashion was fabulous" in the '70s and '80s. She "took up gardening with a passion," and has a beautiful garden at their house on David's Lane, and she wrote a book, "DIRT: The Lowdown on Growing a Garden With Style," in 1994. She is the chairwoman of the L.V.I.S. Nature Trail Committee and serves on the East Hampton Town Architectural Review Board, but it is as longtime president of the board of the LongHouse Reserve "that she gives her heart and soul," she said.

Ms. Marigold and Ms. Benson are both eucharistic ministers and have served on the Vestry of St. Luke’s Episcopal Church, Ms. Marigold for four years as a member and subsequently as junior warden, then senior warden. They are active in the church on many fronts with the fair, the grounds, and fund-raising garden and house tours. Ms. Marigold wrote a history of St. Luke’s titled "God Is Love."