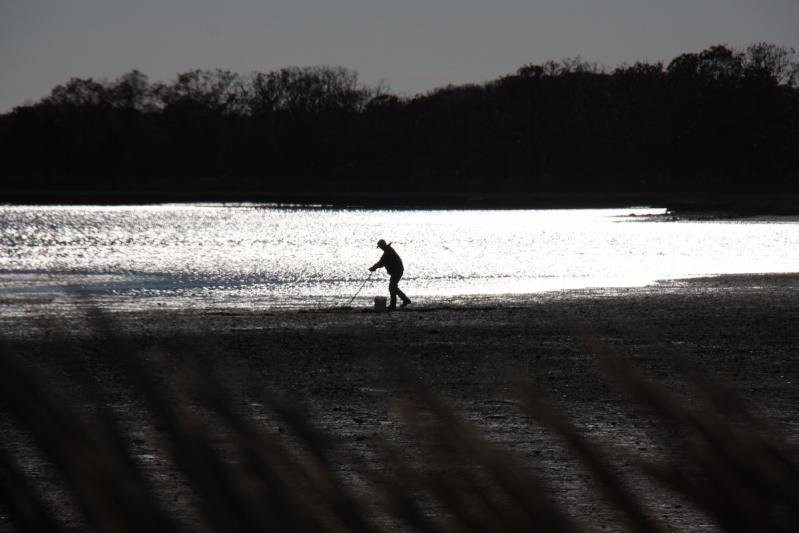 Clamming on the East End.
Durell Godfrey
By Hannah Selinger

Clam pie, in East Hampton, has numerous permutations. It isn't just one thing -- and that's because it's mostly a dish of access. In winter, it's a larder dish, comprising what you have on hand: potatoes, salt pork or bacon, dried herbs, onions, milk, a little water. In summer, when the garden is flush, a clam pie can expand to include the overflow. Why doesn't a green tomato, or a bell pepper belong in a clam pie in summer, after all?

Chef Paul Roman, East Hampton resident and Babylon native, has long been known for his clamming and clam-cooking talents. "I got into cooking at an early age," he said. "I've been a chef since the '70s. Went to the Culinary Institute." He currently holds the title of sole four-time winner of the East Hampton Trustees Biggest Clam Contest. He's also a frequent judge (and sometimes winner) of the Montauk Clam Chowder Contest, which takes place each Columbus Day Weekend, during the Fall Festival.

All that clamming and clam enthusiasm drove home a central theme for Roman. Clam pie is a microregional dish. How could he narrow down what it was, and execute the best version of it? "I started out looking through whatever articles had been written," he said. "It's nothing that even came down here from northern New England. Even though they became famous for New England clam chowder and fried clams, they never seem to incorporate their clams into their savory pies. When the first settlers came down here, they latched onto the clam thing. I guess we didn't have as many oysters." The first recipe that Roman found was from 1896, from the Ladies Village Improvement Society of East Hampton.

The first recipe for clam pie is more of an approximation. Attributed to a Mrs. Ann Parsons, and reprinted in multiple editions thereafter, the recipe calls for clams — or oysters, a scant cup of milk, one beaten egg, a little broth, butter, pepper, and salt. There are no details regarding method, or which types of clams should be used (quahogs vs. steamers, for instance). The crust is not mentioned at all. Are the clams cooked first? What is the temperature of the oven? Much is left to the imagination.

Trace the clam pie through time and you'll see a sort of evolution. Paul Roman has followed the clam pie, speaking to people about their relationship with it. "I went on a couple of Facebook pages -- Bonac Eats -- and I put a thing on there, looking for recipes, stories," he said. "That's really when all the Bennetts and stuff like that started showing up," he said, referring to some local families with the deepest roots here.

Not everyone agreed on what should go into a clam pie (in fact, most had quite different ideas of what made a pie great). But most, Roman said, agreed that a clam pie should contain a double crust. Tracing recipes on my own, I found that time told a similar story. The early 1900s offered spare recipes, with hard clams, maybe, or maybe soft, sometimes with potatoes, sometimes without -- and nearly always with a double crust.

But by the late 1930s, there were more than a handful of iterations, including a recipe from the Rattray family, using soft and hard clams and fresh parsley, a recipe from Mrs. William Conrad, with minute tapioca, only hard clams, and crumbled milk crackers, presumably for texture, and a pie served with a decadent cream sauce on the side, lingering Depression notwithstanding.

Those recipes began, over time, to pile up. The Sea Spray Inn in East Hampton, lost years ago to a fire, contributed its own version to a later edition of the L.V.I.S. cookbook (and, reportedly, sent 135 of the pies to the 1950 L.V.I.S. summer fair). And the Ladies Village Improvement Society was not the only contributor. In Amagansett, Gean Finch Barnes added her recipe to the Amagansett First Presbyterian Church's cookbook: hard clams, chopped; small potatoes, white cream sauce, and a shortening-based crust. A 1948 recipe from the East Hampton First Presbyterian Church calls for soft clams (ground), onions, evaporated milk, salt, and pepper. Hard shell. Soft shell. Potatoes. None. Lard. Shortening. Cream. Does clam pie have a perfect recipe, or is "perfect" in the eye of the beholder?

Some of the lore of the clam pie, of course, is its placeholder in memory and in time. Paul Roman recalls the Crystal Room on Pantigo Road, where many East Enders went to source clam pies of yore. "It had a sign nailed up to a tree that said 'Clam Pies,' " he said. "And a lot of local people will know that sign. It was kind of like a weird-looking place. It was kind of like going to the Bates Motel for takeout." These days, enthusiasts go not to the Crystal Room, which no longer exists, but to Stuart's Seafood Market, in Amagansett, where the Sasso family freezes pies for enthusiasts around town.

Paul Roman has not yet developed the perfect clam pie recipe, though he hopes that his crowd sourcing will lead him to an inevitable conclusion. "I still think a lard-based crust is the best for this," he said, of one of the decisions that he has made. "The main ingredient is still the filling, but the first thing you're going to eat is still the crust. Cook the clams a little first. Eliminate some of the water." As for the pursuit of the perfect pie, it's not a reductive journey. "This isn't anywhere else. This is only out here. It's a silly little item to try and save, but I think it's an important thing."

Anecdotally, generations of East Hampton residents seem to agree. "The 300th Anniversary Cook Book," arranged by the L.V.I.S. in 1948 to commemorate East Hampton Town's 300th year, offers the following: "There are different schools of thought on Long Island Clam Pie, which is unknown in the Big City. Some use hard clams; some use both hard and soft. However it is made, it is delectable."

Mashashimuet Park's History and Future
A Conference for Young People to Create Solutions
Get Outside, Get Moving
END_OF_DOCUMENT_TOKEN_TO_BE_REPLACED