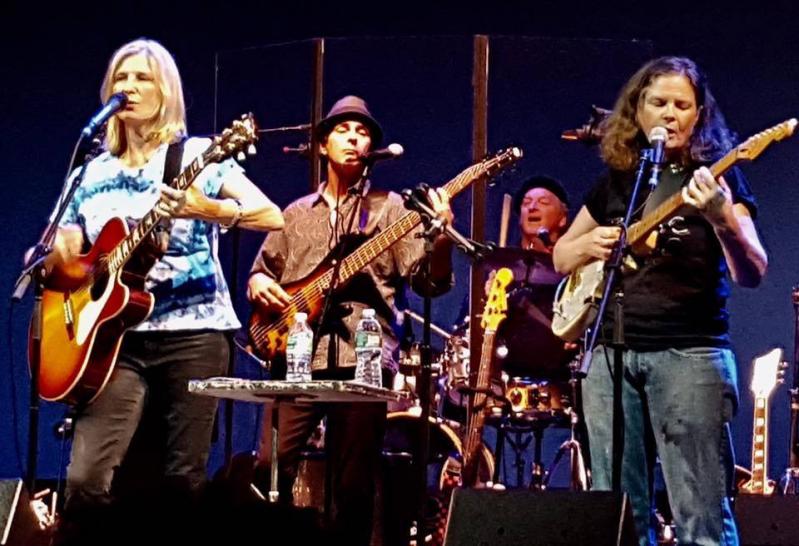 Is it over yet? This year is surely one to forget, but at least we have the holidays to bring a bit of cheer. If you need a few tips to set the mood, the South Fork's musicians have no shortage of suggestions.

Home for Christmas
Christmas may be bittersweet this year, but merriment came early to East Hampton's MonkMusic Studios, where the Grammy Award-winning producer Cynthia Daniels recently recorded a jazz rendition of "I'll Be Home for Christmas" with her duo, OCDC. "Sarah Greene, my duo partner, brought the chart to me a few years ago and said, 'I've got a great jazz version of a Christmas song,' " she said. "It's really fun to play, and we have been performing it around holiday time for a while, and every now and then will pull it out in a summertime gig. This year there are no gigs, so we're recording and we'll just put it out there." Check social media for this gift "sometime before Dec. 25," Ms. Daniels said.

Rock the Halls
For maximum jollity, the guitarist G.E. Smith, who lives in Amagansett, pointed to Hall & Oates's 1983 recording of "Jingle Bell Rock," a video of which is searchable on YouTube. The "guitar-playing granny," who may look familiar to Amagansett residents, deftly channels Hank Garland, who performed the song's memorable licks on the 1957 original. "It's a riot," Mr. Smith said.

Waltzing in a Wonderland
"I've always had a soft spot for 'The Christmas Waltz,' " said the pianist Judy Carmichael, "which was the first song I ever played on TV." The performance was in San Francisco, and on the flight from her hometown of Los Angeles she was seated next to Natalie Wood (who had starred in "Miracle on 34th Street" at age 8), "so it was a memorable experience all around." Ms. Carmichael, who lives in Sag Harbor, is partial to Frank Sinatra's 1954 rendition. "I also love 'Winter Wonderland,' which was the first song I ever sang on TV! I've just realized that both these 'firsts' were with Christmas songs!"

Lots to Love
For the singer-songwriter Suzanne Vega, who owns a house in Amagansett, "Santa Claus Is Comin' to Town," as recorded by Bruce Springsteen at C.W. Post College in Brookville in 1975, is a favorite among the classics saturating the airwaves lately. Mariah Carey's "All I Want for Christmas Is You" is also treasured, as is "Peace on Earth/The Little Drummer Boy," a 1977 gift from the unlikely pairing of David Bowie with Bing Crosby, who 35 years earlier had recorded the definitive version of "White Christmas."

A Wonderful Life
"Wonderful Christmastime," by another Amagansett resident, Paul McCartney, has a fan in Sean Rafferty, a drummer and singer who lives in Springs. "It's not Christmas until I've heard 'Wonderful Christmas-time,' " he said. Another favorite is "Father Christmas" by the Kinks, "because it's straight-out rock 'n' roll."

The King's Christmas Tunes
Down the road apiece, the singer-songwriter Inda Eaton waits until Christmas Eve to crank up the holiday tunes. "For years, it's the same formula," she said, listing "Elvis's Christmas Album," Bette Midler's "Cool Yule," and "A Christmas Album" by James Taylor. In Ms. Eaton's house, "Blue Christmas," one of Presley's most beloved recordings, "gets put on repeat like a jukebox bender with a stack of quarters."

A Hip-Hop Holiday
"I've always had a soft spot for schmaltzy Christmas music," said Jack Marshall, an East Hampton guitarist, "but that being said, my favorite Christmas song of all time has to be 'Christmas in Hollis' by Run-D.M.C." The hip-hop take on the season appeared on the 1987 compilation "A Very Special Christmas," "which has always been a crowd favorite for my family around the holidays."

Christmas Wishes
Back at MonkMusic, Jeff LeBlanc, a singer-songwriter who lives in Bellport, recorded "All I Want for Christmas" there in 2019 for SiriusXM's Acoustic Christmas channel. "It came out so well that I decided to release it," he said. Mr. LeBlanc confessed to being "a sucker for the classics," and mused about recording "my own bluesy 'I'll Be Home for Christmas.' "

Home for Christmas
"I think everyone's going to be home for Christmas," said Ms. Daniels, sounding a bit bluesy herself as she considered 2020's devastation. "However, the fact is that many people cannot be 'home for the holidays.' " The season "has a bittersweet flavor to it at this point," she said. "I'll be home, all right, but I might not be home with you. So keep the home fires burning."