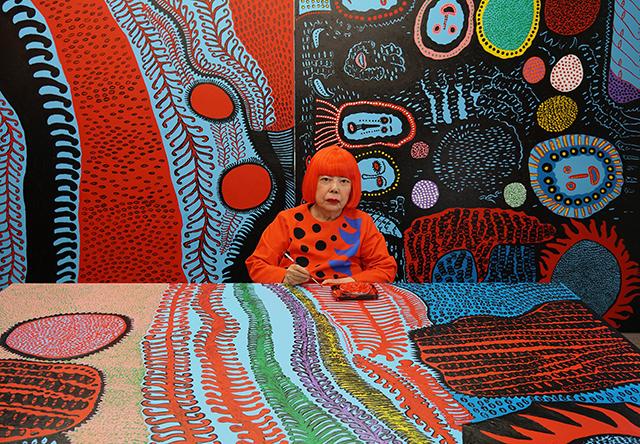 The Japanese avant-garde artist Yayoi Kusama was filmed surrounded by her artwork and signature polka dots in “Kusama: Infinity,” which will be shown at the Parrish Art Museum in Water Mill on Sunday.
Parrish Art Museum and Hamptons Doc Fest
By Mark Segal

The roots of the Hamptons Arts Network go back to December 2016, when a few representatives of local arts institutions got together at a bar in Sag Harbor to talk about how to move beyond informal, ad hoc partnerships to more focused and sustained collaborations that would not only involve supporting each other’s missions but also help stimulate the region’s off-season economy.

The Hamptons Arts Weekend Festival (THAW Fest), which debuted last March and will roll out its second iteration this weekend, is the most visible manifestation of the arts network. “You can think of it as almost like an open house for the 19 organizations that are involved,” said Andrea Grover, Guild Hall’s executive director.

Starting tomorrow evening with a dance party with D.J. Twilo at the Parrish Art Museum in Water Mill and an All-Star Comedy Show at Bay Street Theater in Sag Harbor, the weekend will shift into high gear Saturday with a variety of programs and events, including films, tours, performances, music, theater, and art exhibitions.

The Hamptons Visitors Council has arranged a free shuttle to events on Saturday and Sunday in East Hampton and Southampton Towns. The shuttle schedule can be found at hamptonsartsnetwork.org along with a complete listing of programs and events. A breakdown of events by category follows.

The Hamptons International Film Festival will present a free screening of “Field of Dreams” in celebration of that classic’s 30-year anniversary on Saturday at 6 p.m. at Guild Hall. Kevin Costner and Amy Madigan star as Ray and Annie Kinsella, a young couple whose plan to quietly run a family farm in Iowa is disrupted when Ray, standing in the middle of his cornfield, hears that famous line: “If you build it, he will come.”

The critic Roger Ebert called the sports fantasy drama “the kind of movie Frank Capra might have directed, and James Stewart might have starred in — a movie about dreams.” The festival promises a discussion with special guests after the screening.

Although she is the top-selling female artist in the world, Yayoi Kusama will never be accused of selling out. Now 89, the Japanese artist has pushed boundaries in the art world for more than 60 years with a body of work that spans painting, sculpture, installation art, performance, poetry, and literary fiction. “Kusama: Infinity,” a new documentary by Heather Lenz that will be shown at the Parrish Art Museum on Sunday at 2 p.m., captures the extraordinary life and work of this artist, who opened her own museum in Tokyo in 2017.

Presented in partnership with the Hamptons Doc Fest, the screening will be followed by a discussion between John Torreano, an artist, and Terrie Sultan, the museum’s director. Tickets cost $15, $5 for members and students.

“Mamma Mia!” — the jukebox musical based on the songs of the Swedish pop foursome ABBA — will be performed at the Southampton Cultural Center tomorrow and Saturday evenings at 7 and Sunday afternoon at 2:30. Tickets are $30, $15 for students under 21, and the experience can be extended with a dinner-theater or brunch-theater package.

Bay Street Theater will present a rock concert by Foreigners Journey on Saturday at 8 p.m. The group brings together the music of Foreigner and Journey, two of the most popular arena bands of the 1970s and 1980s, whose hits included “Cold as Ice,” “Hot Blooded,” “Feels Like the First Time,” “Jukebox Hero,” “Anyway You Want It,” and “Don’t Stop Believin’.” Tickets are $35, $45 the day of the show.

Also on Saturday at 8 p.m., Jobs Pub at the Southampton Arts Center will host “Songs of the Silver Screen,” a live concert featuring Valerie diLorenzo, an award-winning New York City cabaret artist, and her guests Sue Conklin, Amy Kirwin, Julienne Penza-Boone, and Darren Ottati. The program will include songs from such movie musicals as “Meet Me in St. Louis,” “Guys and Dolls,” “The Sound of Music,” and “Funny Girl.” Tickets are $25, $20 for SAC members.