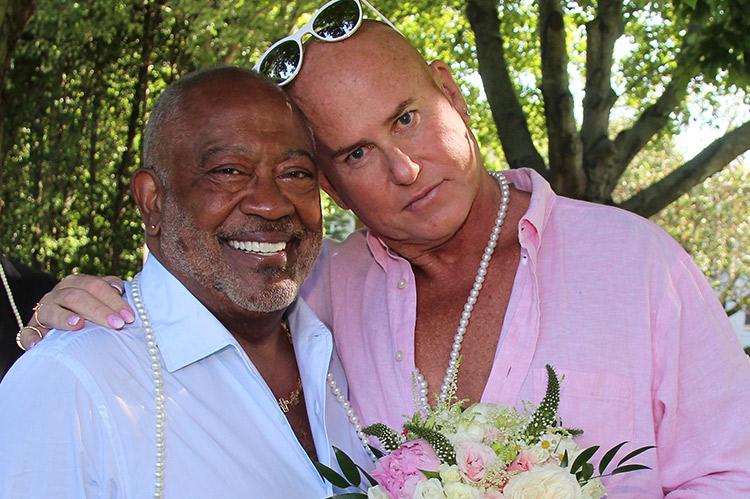 James V. Wright of Montauk and Ralph Gibson of East Hampton were married on June 15 in a small ceremony at East Hampton Village Hall. Theirs was the first same-sex marriage conducted by Mayor Jerry Larsen.

Mr. Wright, a Montauk Fire District commissioner, is self-employed as a property manager, and has had a “varied and fascinating career,” his husband wrote. He spent two years in the Army as a Black Hawk crew chief, worked as a lobsterman and commercial fisherman, and with his former wife invested in residential property and bought, operated, and then sold a hotel in Montauk. He was elected a Montauk fire commissioner in 2017 and serves as the vice chairman of the board of commissioners. He is also a member of the Montauk Point Lions Club.

Dr. Gibson, a former investment banker, has worked as a solo primary care physician in East Hampton for over 20 years. He is also the medical director of the East Hampton Village Police Department, the East Hampton Village Ambulance Corps, the Amagansett Ambulance Corps, and the East Hampton emergency dispatchers, and oversees all of the defibrillators in the town. He has served on the board of directors of Southampton Hospital and was a director of the former Suffolk County National Bank. A graduate of Harvard College, Dr. Gibson holds an M.B.A. from the University of Chicago Graduate School of Business. He is a graduate also of Weill-Cornell Medical School.

His previous marriage, to Andrew Jacobyansky, was the first same-sex marriage performed in the Town of East Hampton; it was conducted by former Mayor Paul F. Rickenbach Jr. on June 11, 2011. Mr. Jacobyansky died in 2017.

Mr. Wright insisted that the wedding take place on June 15, which would have been Mr. Jacobyansky’s 67th birthday.

Mr. Wright’s marriage ended in divorce. He has two adult daughters, Christina Wright of Montauk and Danielle Wright of Oregon. His parents, William and Patricia Wright, live in West Falmouth, Mass., where he grew up. “He is truly a renaissance man,” his husband wrote, noting that his interests include the study of philosophy and economics and that he is a licensed yoga instructor, former emergency medical technician, boat captain, and “exercise enthusiast.”

Dr. Gibson grew up in Ann Arbor, Mich. His father, Ralph, died in 2011. His mother, Dr. Rose Campbell Gibson, lives with him and Mr. Wright in East Hampton.

The couple’s wedding was attended by Mr. Wright’s daughter, Danielle, by Dr. Gibson’s brother, John Gibson, and by nine close friends. An informal dinner organized by Sheila Anderson followed at the Palm in East Hampton.

The couple are unable to take time off during the summer months, but plan a honeymoon in Malta in the fall.