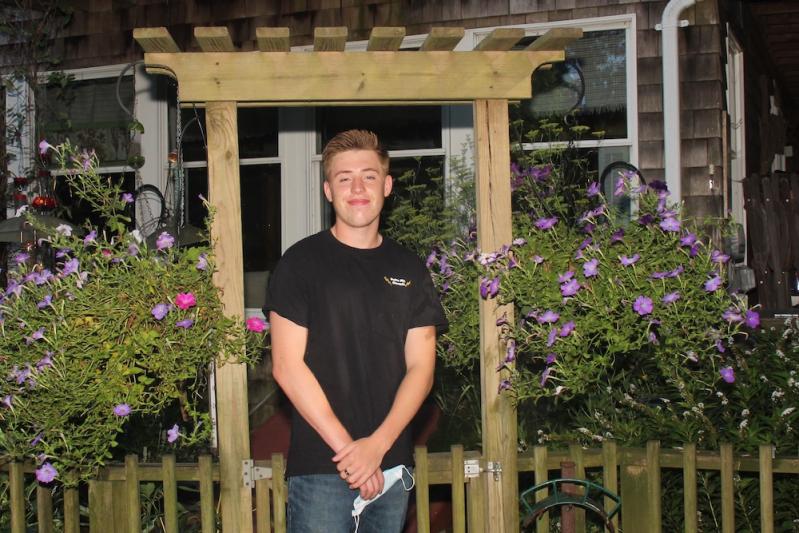 "As the virus was growing here, we didn’t hear anything about it," said Ben Schoenster, a Navy sailor from East Hampton who was at sea in the early days of the pandemic. But it hit home for him nonetheless when his grandmother died from Covid-19 in April.
Durell Godfrey
By Anabel Sosa

When the pandemic swept the world last winter, Ben Schoenster, a 19-year-old Navy sailor, was blissfully out at sea.

After graduating from East Hampton High School in 2018, he enrolled at Suffolk Community College, but he had a yearning to experience more. After a semester of classes, he enlisted in the Navy Reserve.

"I was extremely excited," he said, mentioning that his father, a Navy veteran, had encouraged him to enlist. "I figured there's no reason to be worried."

They set sail on Nov. 18, unaware of the long journey that lay ahead.

The ships, with a total of nearly 5,000 sailors aboard, were stationed off a port in the Arabian Sea, on the eastern coast of Duqm, Oman, in the Middle East. The sailors spent their days working out, launching aircrafts, and sleeping.

By January, there were whispers of an illness spreading.

"When the pandemic first happened, we didn't hear much about it," Mr. Schoenster said. "We were in our own little world. Only a couple of people knew about it."

"At first, we thought it was something going around like the flu. No one really knew what it was."

On the ship, access to news was limited. If Mr. Schoenster wanted any updates, he relied on emails sent to him by his mother. Sometimes, he could catch a glimpse of the television in his commander's office, a place he would visit infrequently for miscellaneous tasks like filling out paperwork.

"Every now and then, we'd sail close to shore to get Wi-Fi. But when thousands of sailors are trying to connect to one service tower, it wouldn't really work."

Over the course of the months at sea, the sailors continued business as usual. Having slept in tight quarters, just inches away from one another, they developed a close bond.

"When you're with each other every single day, things just blur. You really get to know each other. Tensions would blow over quickly because there's no point. We realized we might as well be friends."

As the virus continued to spread across the globe, the men and women aboard the ship were blinded from the realities of the world around them.

"It kind of went dead for a while. As the virus was growing here, we didn't hear anything about it. We were pretty segregated from the world."

But then, on April 17, Mr. Schoenster's grandmother died of the coronavirus. And shortly after that, the uncle of one of his best friends on the ship also died of the virus.

"It was a surreal moment when you realize it's affecting everyone."

The two grew closer in the months following the deaths of their relatives. Every day, they would meet for coffee.

"We started to open up. You realize you can't bundle things up."

As friendships grew stronger, all there was left to do was wait. Months went by, and there was no indication of when they could go back.

Finally, the ship was allowed to head home. It took them several weeks, but eventually, by June 16, they had docked at Norfolk, Va.

"At that point, everyone wanted to see their families. We just wanted to go home."

Mr. Schoenster returned to East Hampton, where he was reunited with his parents and his three older brothers.

"It felt weird to come back," he admitted. "Everyone is more divided now. I noticed there are more arguments going around, a general hatred going on. You don't get to talk to your friends as much. You aren't as close to people as you once were."

On Tuesday, after a month of unwinding and family time, he packed up his bags and returned to duty.

"I remember my dad telling me that if he knew it would be like this, he'd tell me not to go," he said. "But I don't regret it. I knew I would get home eventually."