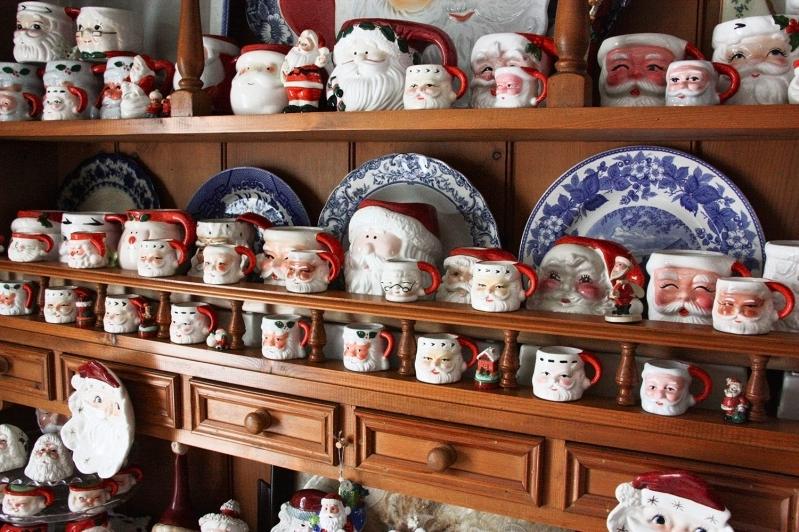 Lynn King was born on Thanksgiving Day, so, naturally, she likes Thanksgiving. But she flat-out loves Christmas — and her impressive collection of Santa Claus mugs is a testament to her holiday obsession.

Ms. King has lost count of exactly how many she has; she estimates there are more than 100. Her collection fills a tall wooden hutch in her dining room, and putting them all out for display each year means propping some up higher, on pieces of wood, so they can all be seen behind other rows of Santa mugs.

Talk about a cup of cheer.

“They make me feel happy,” the East Hampton Village resident said in a recent interview. “The grandkids loved seeing all the different ones.”

Ms. King has a collection of photos of her grandchildren, too: Hailey, 6, and Austin, 4, command lots of real estate on her kitchen cabinets. She also collects Swarovski crystal pieces and live plants of many varieties. Her husband, David King, a plumber, collects duck decoys. But the mugs stand out, and after a few years of keeping them packed away, they’ll make an appearance once again this year.

“Everybody likes Christmas, but I go a little insane,” Ms. King admitted. “I got it from my mom, I think. She decorated all-out for Christmas. . . . I think everyone does what their mother does at some point.”

Her mother, Martha Wells, died in August, just three days shy of her 103rd birthday. Ms. Wells was known to sew her own Christmas ornaments, some of which Ms. King still has. “They’ll definitely be on the tree this year,” Ms. King said. “This year will be a little more special with my mom’s decorations.”

The ornaments will no doubt complement the dozens of Santa mugs. Santa plates and pitchers also feature in Ms. King’s collection, though she has not gone so far as to include salt-and-pepper shakers bearing the face of Mr. or Mrs. Claus.

The mugs range in size from “this big” — Ms. King holds her thumb and forefinger about two inches apart — to a few jumbo pieces, large enough for a Christmas Eve beverage for not just St. Nicholas but his reindeer, too.

Pottery Barn retails a set of four Santa mugs for $38; at Target, you’ll find four for $34. There are hundreds of listings for vintage Santa mugs on eBay, and any number of faux-vintage ones on Amazon.com . . . but forget big-box stores or websites, Ms. King advises. She got many of hers at vintage shops and antiques shows. Her very first was a mug she inherited from her husband’s family when she and he married and moved in together in 1973.

“I don’t actively collect them anymore,” she said, “but I can’t say I wouldn’t buy one again if I saw one that really appealed to me.”

Many came as gifts over the years.

“If you have more than one of something,” she says, “after a number of Christmases and birthdays, you’ll have many more.”

Santa’s whimsical smile, 100 times over in Ms. King’s kitchen, surely boosts the spirits of anyone who sees it.