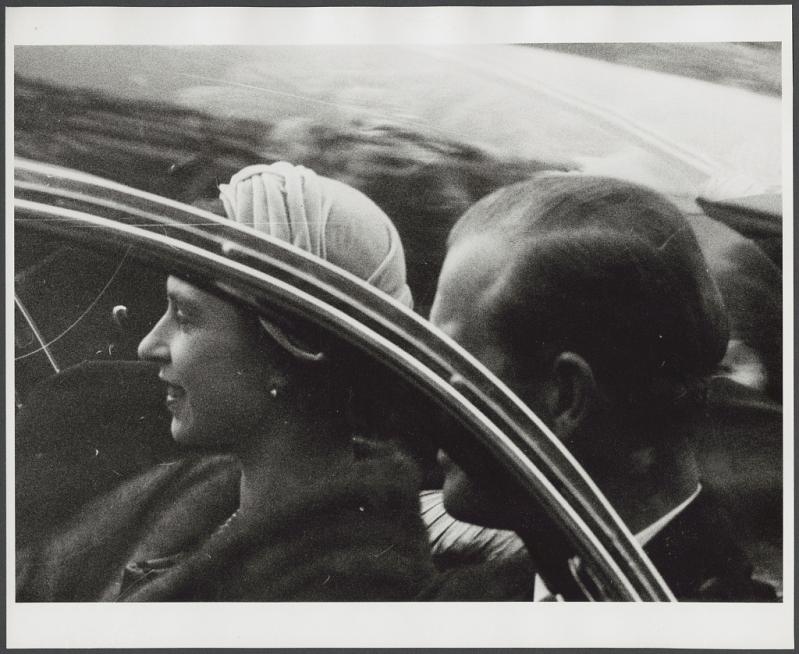 I will be in England next month, too late to join the mileslong Queue for the Queen. This “Guestwords” is my way of paying my respects to this woman who so impressively embodied Britain’s history and spirit. Elizabeth II became queen when her father, George VI, died in his sleep 70 years ago in February.

That month I was accepted as a student at a boarding school in England attached to Ampleforth Abbey. Its coat of arms features Westminster Abbey, to which it has unique links back through Queen Mary Tudor to the founding of the west-side equivalent of St. Paul’s Cathedral.

I was 11 years old and at school when Elizabeth II was crowned queen. At the end of my first year, on June 2, 1953, a few of us boys who had not yet left for summer vacation were privileged to watch her coronation on an early-model television with a screen the size of an iPhone. We watched at Gilling Castle, home of the same Yorkshire Fairfax family that gave the Parliamentarian Oliver Cromwell the general who hunted down Charles I in Oxford, where he had been sheltered by royalist colleges.

The live BBC show was a boon for the infant television industry — many families bought their first television sets just for the event. I didn’t see much detail on the screen, but I was appropriately awed by the long procession and the Westminster Abbey ceremony. Feeling the respect everyone showed for the late king and young queen gave me a sense of being part of history.

My older brother, Randal, literally had a ringside seat at the coronation. His lately deceased friend, then John Viscount Encombe, was his roommate at St. Thomas’s House at Ampleforth. Encombe’s father was the Fourth Earl of Eldon and lord-in-waiting to the late king and new queen. Encombe’s younger brother, Simon Scott, was a “page of honour” to the queen mother. Ampleforth’s famed headmaster, Father Paul Nevill, himself a year away from death, must have enjoyed announcing that the new queen had “ordered” him to release young Simon Scott for the ceremony.

Randal’s friendship with Encombe snagged him a seat on the mall to watch the procession along with 8,000 guests. He reported to me that the most memorable sight was the formidable Queen of Tonga, ruler of a nation of many small islands in the Indo-Pacific. She was 6 feet 3 inches, every inch a queen, and rode, despite some rain, in an open carriage.

Elizabeth II was the longest-reigning monarch in British history, beating out Queen Victoria and (ugh) George III. She was two years short of equaling the long rule of the French King Louis XIV, but when he was crowned he was only 4 years old, which is kind of cheating.

During her reign, Queen Elizabeth II visited New York City three times, in 1957, 1976, and 2010. (Her son, now King Charles III, has visited 30 times.) On her first visit, she took the Staten Island Ferry to get a better view of the city skyline, visited the Empire State Building, and had a meal at the Waldorf-Astoria. She addressed the United Nations General Assembly, saying, “The United Nations will achieve the goal of a world of peace.” This month, many of those who planned to come to New York City for the U.N. General Assembly have been diverted to London to pay their respects.

In 1976, Mayor Abe Beame gave her the key to the city — easy enough, since the city was in the throes of near-bankruptcy and had little to worry about keeping under lock and key. She took a shopping trip and made a visit to Washington Heights to see the Morris House, a former military headquarters during the American Revolution.

Finally, in 2010, Queen Elizabeth spoke again to the United Nations and placed a wreath at the 9/11 Memorial, opening a garden near Ground Zero in memory of the 67 British citizens killed in the 9/11 attacks.

In 1740 the song “Rule, Britannia! Britannia Rule the Waves” came together with James Thomson’s patriotic poem and music by Thomas Arne. At the time, Britain’s ruling the waves was aspirational. It became a reality.

Queen Elizabeth learned to rule her own waves, which was a large part of what she offered to her legions of fans. With a flat hand, she used a side-to-side wave that looked like she was erasing a blackboard. She also used a “wipe the window” wave, moving from top to bottom. But my favorite of her waves was the “screw in the lightbulb” version, with her right hand making a circular motion in the air.

Elizabeth ruled with the same steady hand that ruled her waves. Conflict raged around her, and she had her share of personal tragedy, including the death last year of her husband, Prince Philip, just a year from his 100th birthday and 75th anniversary of marriage.

She was not high on the list of likely monarchs until her uncle, King Edward VIII, abdicated in 1936 to marry the divorced American femme fatale Wallis Simpson. But at her coronation, Elizabeth said, “Throughout all my life and with all my heart I shall strive to be worthy of your trust.” That was an oath she lived up to.

The chancellor of Oxford University, Lord Patten of Barnes, who once tearfully pulled down the Union Flag as Britain departed Hong Kong, said that Queen Elizabeth was one of Britain’s greatest monarchs — “not solely because of the achievements and length of her remarkable reign,” but “above all, because of her utter dedication to duty, responsibility, decency, and brave integrity.”

Unlike the American electorate, the British can divert their eyes from the hurly-burly of governmental politics and follow the mostly serene doings of the royal family, who take on much of the ribbon-cutting and other ceremonial activity that would otherwise distract those conducting government business.

The United States was well rid of George III, but the achievements of the late queen make you wonder whether this country might give the monarchy a second look. A ceremonial head of state might make our transitions between elections easier as well as better focus the functions of the White House.

John Tepper Marlin has lived in Springs since 1981. He is the author of “Oxford College Arms” (Boissevain Books, 2018) and a frequent contributor to “Guestwords.”