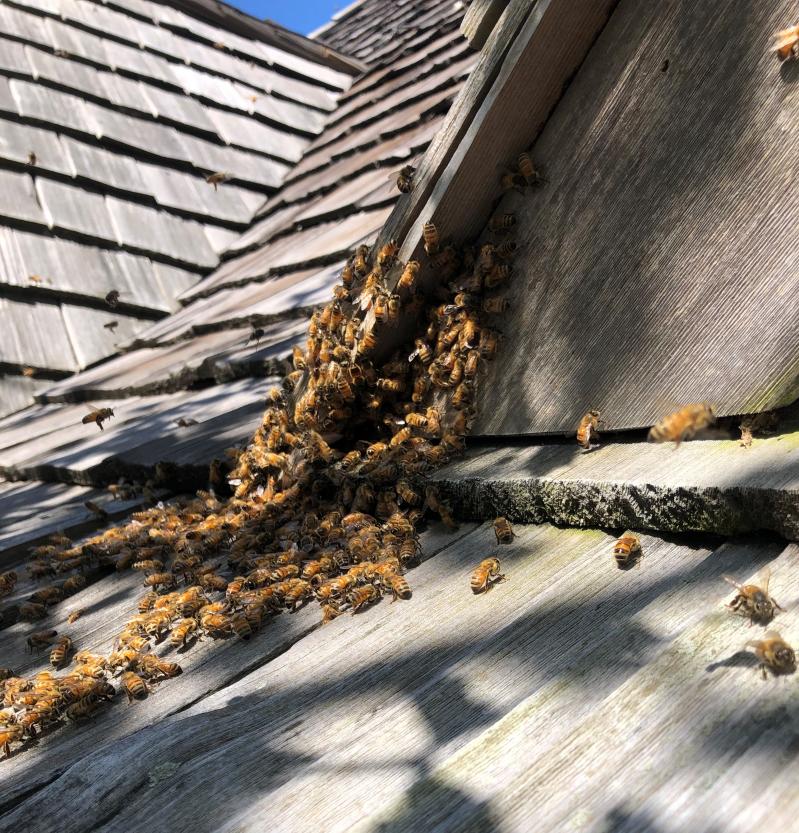 It’s honeybee swarm season across much of America, and a few swarms have already been reported here in East Hampton. A honeybee colony can swarm at any time of the year in warmer climates, but in our area, they typically swarm when the temperature is over 50 degrees Fahrenheit, with most occurring when the nectar flow is in full force, usually between May and July.

Although environmental cues inform the colony that an abundant supply of nectar and pollen is available to provide the resources necessary to sustain a swarm, running out of room in the hive (whether it is a managed or wild colony) is generally the trigger that initiates the swarming.

A honeybee colony has a queen bee that can lay up to 2,000 eggs a day, with each egg becoming a new male or female bee. Each honeybee in the colony is similar to a cell in a body. The bee, like the cell, has an important role, but cannot survive independently. Each bee in the colony works for the benefit of the whole, and as such the colony is considered a superorganism.

When this superorganism swarms, it is considered colony-level reproduction, fulfilling the honeybees’ natural instinct to procreate. It is the birth of a new colony, and like most newly born organisms, it is quite vulnerable. While one colony can cast many swarms, and each swarm has the potential to thrive, only about 20 percent of swarms actually survive in the wild.

The inability to find a new home, or being exterminated when a home is chosen where it is unwanted, causes the deaths of far too many swarms. Pesticides poison or weaken colonies to the point where something that normally wouldn’t outright kill them, does. Many swarms cannot store enough food to get through the winter, while others that do find a home and have ample food will die because they are not treated for common honeybee pests and diseases.

Each year, we lose an average of 40 percent of our managed honeybees in America. Add the accidental and intentional deaths of honeybee families, and we have an extremely distressing situation for both the bees and us.

A swarm of honeybees can contain up to 50,000 bees. It is quite the sight to see. A swarm often sounds like a train and can darken the sky. Although some may find swarms intimidating, the bees in them are quite docile and basically harmless. I am not suggesting that the average person should interact with a swarm, but rather should call a beekeeper to retrieve and rehome them. If you aren’t sure what a honeybee swarm looks like, please search online or check your local library.

After leaving the hive, the swarm will rest for a few minutes up to a few days while scout bees search for a new home. A swarm can leave at any time of day. Swarms don’t fly at night or in strong winds or rain, so these situations can give a beekeeper more time to get to a swarm if needed. Swarms tend to look for a dry, dark cavity about the size of a five-gallon bucket. They might choose a hollow tree, toy box, barbecue, or a void in a wall of a house or other structure.

Honeybees will not make a hole in your house, but they will take advantage of an existing one. So be sure to take a good look around your property and seal up all cracks and crevices so a swarm cannot move in. This bit of preventive home maintenance can also deter other insects such as wasps and hornets.

If you do find that a swarm of honeybees has moved into a wall or another area on your property, you cannot and should not kill them. Thankfully, in Suffolk County it is illegal to kill swarms or colonies of honeybees in unwanted places. It is also unnecessary and extremely inhumane. Honeybees are not aggressive animals, but they can be defensive, so it is best to have them removed and rehomed.

The Long Island Beekeepers Club’s website has a list of beekeepers who are experienced at removing both swarms and colonies, and Cornell has an extensive list throughout New York State that can be found by searching for NYS Swarm Catcher Directory.

This information is important only if you eat or know anyone who does, as honeybees are responsible for pollinating much of our food. They also help most flowering trees and plants reproduce, which in turn helps wildlife survive. The flora made possible by honeybees reduces erosion and subsequent sedimentation of our water bodies. Can you believe that honeybees help remove carbon dioxide from our atmosphere? It’s true.

Honeybees are one of the few species that do no harm and leave the world a better, more beautiful place. Can we please try to be more like the honeybee? That is the question.

Deborah Klughers is a certified master beekeeper who lives in Springs. She is the proprietor of Bonac Bees.