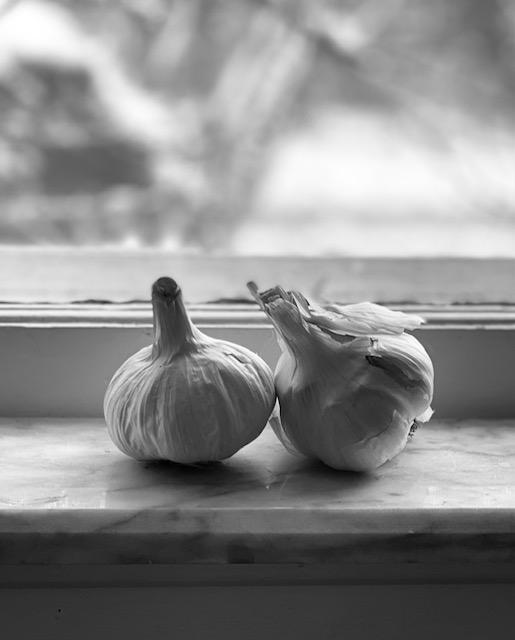 I gaze upon the roast,
that is sliced and laid out
on my plate,
and over it
I spoon the juices
of carrot and onion.
And for once I do not regret
the passage of time.

I sit by a window
that looks
on the soot-stained brick of buildings
and do not care that I see
no living thing — not a bird,
not a branch in bloom,
not a soul moving
in the rooms
behind the dark panes.
These days when there is little
to love or to praise
one could do worse
than yield
to the power of food.
So I bend

to inhale
the steam that rises
from my plate, and I think
of the first time
I tasted a roast
like this.
It was years ago
in Seabright,
Nova Scotia;
my mother leaned
over my dish and filled it
and when I finished
filled it again.
I remember the gravy,
its odor of garlic and celery,
and sopping it up
with pieces of bread.

I remember my brother Tim reading this evocative poem at my mother’s burial. I loved it then and it seems perfect for now. “These days . . . one could do worse than yield to the power of food.” And poetry. Reading it again, I remember other times as well.

My first job was at Atheneum, a small publishing house run by the son of Knopf, where I learned book design. We published only children’s books and poetry. We had the best list of both. Margaret McElderry was my editor. Called the “grande dame of children’s publishing,” she lived in a house on Washington Square that Henry James once lived in. She was quite maternal. Six feet tall, she would invite a few of us to dinner from time to time. Walking through her living room, I would imagine Olivia de Havilland in the movie “The Heiress,” based on James’s novel “Washington Square,” waiting by the window for her suitor, Montgomery Clift, who never comes.

Margaret always made roast chicken, and we ate in her kitchen with a fire going in the fireplace. She would talk about her life, her neighbors, her friends, Arthur Miller and Marilyn, never bragging but just in love with her life and us, her girls.

Harry Ford was a legendary poetry editor of the time, and Mark Strand, who wrote this poem, was in his stable, which included W.S. Merwin, who would go on to become the national poet laureate. Strand was dashing, and the women all swooned when he came in. He was tall, handsome, wore cowboy boots, and looked like Clint Eastwood. He never said hello to me, but then one day when I was wearing my first Diane von Furstenberg wrap dress, he peeked into our office and told me that he loved my “frock.” I wore it for years because of that.

Reading this poem, I can see him as a boy at the table in the cold landscape of Seabright, Nova Scotia, the warmth of the kitchen, his mother giving him his supper. He inhales the steam and smells the gravy, its odor of garlic and celery, sopping it with the bread.

We lived near the ocean next to a town called Seabright as well, and of course it reminded me of supper in our kitchen, the heart and soul of our house, the essence of our home. My grandfather would often be there, especially when my mother made his favorite dish. “Mary Jane, no one makes pot roast like you,” he would say to his daughter as he sipped his hot toddy and had a few hors d’oeuvres while she prepared the meal.

The girls would set the long table, six places on each side, cloth napkins folded in triangles, water in the glasses, each setting with her fabulous salad neatly on the side. We sat on the radiator to keep warm until we got the word and then tumbled around the table.

Standing at the stove, she filled each plate, first serving my father and grandfather, then making sure we had enough, remembering what each of my 11 brothers and sisters liked, carefully leaving carrots off mine, then putting the delicious, warm plates down in front of each of us. We said grace and began to eat. I don’t remember anyone ever asking for seconds, and I always left a small piece of food on my plate. It may have been because she would sit at the head of the table after with a small portion of food for herself. I never understood why.

As the years pass, I have had pot roast many times, none as good as hers. Was it “the meat of memory,” as Strand wrote, or her standing at the stove in the warm kitchen and the feeling of love with each plate put before us, surrounded by the comfort and safety of our big family, that made it taste so heavenly?

My late husband always said that food only tastes good if it’s made with love, and with her guidance he finally mastered it. And now, “I taste it again. The meat of memory. The meat of no change. I raise my fork and I eat.”

Nora Sheehan has been creative director at magazines including Elle Decor and Architectural Digest. She lives in Sag Harbor and can be reached at [email protected].