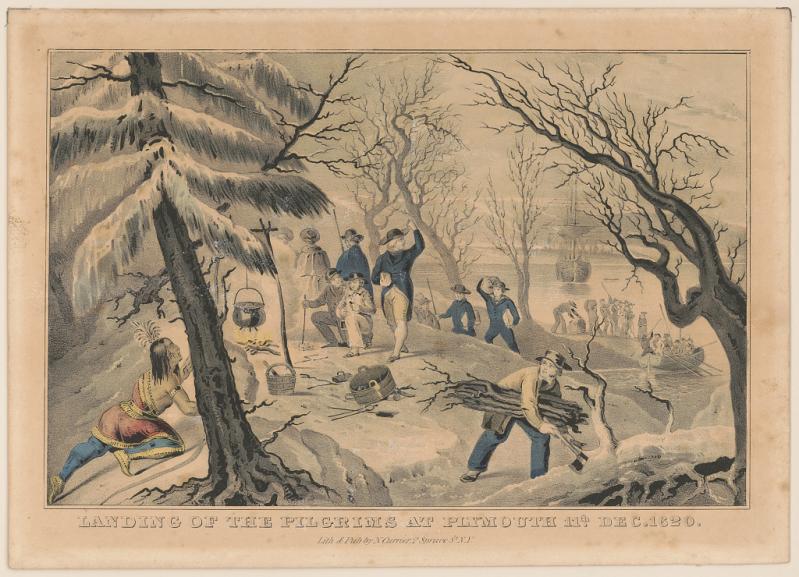 As we look ahead to Thanksgiving, I have been thinking about Tisquantum, a member of the Patuxets who in 1621 startled the Pilgrims with his command of English and helped them survive in their new settlement. His chance appearance in their hour of dire need is worth reflecting upon, but there are other things about his life that have bearing as we consider the recent election.

As Tisquantum’s life testifies, America is no stranger to harmful division, but we can do something to change this.

What we know of Tisquantum, also known as Squanto, begins for us around 1614, when an English ship captain on a trading mission to North America came to harbor on the coast of what is now Massachusetts. This captain defied orders and captured Squanto and numerous others, took them to Spain, and sold them as slaves. Apparently, Squanto was acquired by monks, was taught Christianity, and later worked for a family by the name of Slanie in London. From London he was able to board a ship that would take him back home. Eventually, he located his village, only to find that in his five-year absence his people had been decimated by disease. “The Great Dying” of the people along the coastline is believed to have been the tragic result of disease brought by European traders.

A year or so later, the Englishman William Bradford and his community — the Pilgrims in search of religious freedom — disembarked in the area of Squanto’s original home. Weakened by the trip and ill prepared for the brutal winter ahead, some settlers died. When spring came, a delegation led by Ousamequin, leader of the Wampanoag confederation, arrived, and the Pilgrims were introduced to Squanto, an encounter that to them was a gift of God. Squanto knew their language, taught them fishing and farming, all the while understanding Christianity as well as their culture.

Squanto’s motivation for being of such help to the settlers is a subject of speculation. One children’s version of this story depicts a goodhearted man happy to see his home populated again with the friendly English. Others believe it is possible that Squanto was directed by Ousamequin as part of a greater strategy to strengthen his people. Diminished in number because of the epidemic, the leader wanted protection against the Narragansetts to the south. Squanto was the key to this new alliance with the English and their weapons.

We celebrate Thanksgiving based on the notion that in the autumn of 1621 the Plymouth settlers celebrated the harvest together with their neighbors. However, there is no record of Bradford inviting the people who helped them survive to the feast. Only when the English shot off their guns in revelry did Wampanoag warriors appear in concern. When they saw it was a feast and not a fight, they brought wild game — and joined the party.

Sadly, despite civil relations, suspicions between the Indigenous population and the new settlers lingered, and Squanto did not live to see another autumn. He had become a companion and invaluable interlocutor for Bradford in dealings with other tribes in the area, but doing so made him appear to his own people to be a double-dealer. Theory maintains that Squanto was likely leveraging his knowledge of each community with the other to his own advantage.

Perhaps he was, but if so, who could blame him for looking out for himself after all he had been through? On an expedition in 1622, Squanto died of a mysterious disease Bradford called “Indian fever.” Historians suggest that he had in fact been poisoned by someone who was tired of being betrayed.

If we understand anything this Thanksgiving, it is that our country is no stranger to division — in fact, our commitment to religious freedom was born in it. The Pilgrims were fleeing the oppression of other Christians; there were hostilities between the Wampanoags and the Narragansetts. Worst of all, in the case of Squanto and countless others, differences between groups mutated into the inability to see the others’ humanity, allowing white enslavers to heartlessly kidnap and “sell” other people for financial gain. And it seems that even when Squanto somehow survived many harms and learned to navigate his way through them, it did not keep him safe.

This November’s election shows that for Democrats in the Senate and Republicans in the House, majorities are so narrow it would be wrong to take them as mandates for control. There is now a choice for the American people: We can either ask our representatives to exploit every margin of advantage and perpetuate division, or we can insist that Washington act upon the numbers by looking for whatever unites us, and negotiate policy for the common good.

Some may wish the simple storybook version of the first Thanksgiving were true, but the real story is better. Was it a quirk of history or the hand of God that brought Squanto and Bradford together? Their relationship enabled a needed legacy of religious freedom to get a foothold somewhere on the planet. I don’t for a minute think that Squanto’s suffering was justified. But the first Thanksgiving tells us that despite the inevitable destruction that comes from our ability to separate ourselves from one another, a redeeming God can still bring about good, and relentlessly teaches us to avoid division. As a pastor, I am captivated by how through God’s grace we may be forgiven our sins and start anew.

As we give thanks for our blessings this Thanksgiving, may we also give our gratitude some gravitas by uniting in a commitment to relationships that heal and don’t harm, a way of being in our families, communities, and country that God does not have to override.

The Rev. Candace Whitman is a pastor-at-large for the Presbytery of Long Island. She lives in East Hampton.