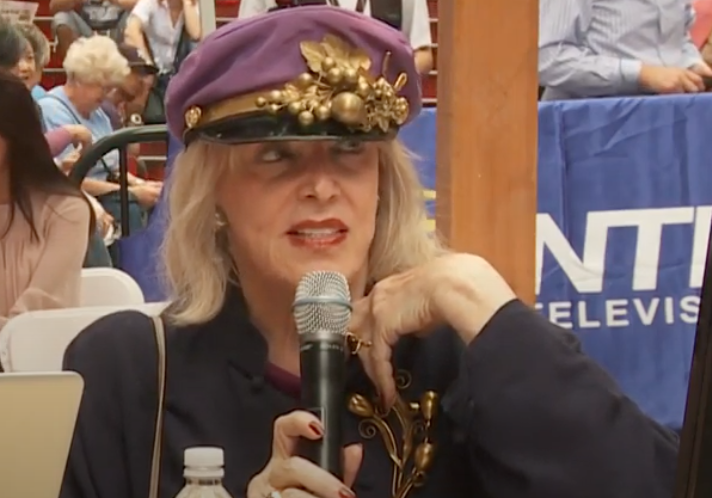 A screen shot of Gael Greene at a 2011 culinary competition fund-raiser for Citymeals on Wheels in Times Square.
YouTube
By Susan Israelson

The famed restaurant critic Gael Greene, a former frequenter of the Hamptons as well as Manhattan and eateries everywhere, died of cancer last week at age 88. The first “foodie,” she coined that term in the early 1980s, spreading the word through passionate prose that seemed to conflate cuisine with concupiscence and sex.

As New York magazine’s pioneering “Insatiable Critic” and a pal of mine in those years, she changed dining out from a way station to a destination, a sensual experience to be savored, using words like supernal, lush, orgasmic.

A restaurant was like a play to Gael, theater in the round. The first act was the entrance, atmosphere, decor — the set; the waiters were the supporting cast; the stars of the show were appetizers and entrees, the denouement, just desserts.

Before her, who would think to compare restaurants for the best lava cake, fried calamari, or pizza crusts, which she measured with sewing tape, or denounce even the most elegant establishments for poor service or tired lettuce? Okay, Michelin, you say, fuddy-duddy, but not for run-of-the-mill dishes or restaurants — they give stars or not. Just a listing.

She was a self-confessed, sometimes shocking sensualist about sex and food, her two loves, lusts. “Great food is like great sex. The more you have, the more you want.” She remembered getting a fried egg sandwich for Elvis, not the sex that came first — so much for poor Presley’s rep.

I was lucky to have the pleasure of being a regular on the Greene Team, an ever-changing gang, twice a week while she reviewed restaurants from North Sea’s Coast Grill to Le Bernardin, once New York’s premier seafood restaurant. (She was dating a co-owner, chef Gilbert Le Coze, and stopped talking to me for months after our visit when he flirted with me.) All I had to do was bring my appetite. Clay Felker was paying!

And here’s how it went. Gael herself made a reservation a week ahead but under an alias (sometimes using the name of her ex-husband, Donald Forst, a top newspaper editor in New York, Boston, and L.A.) but always for a party of six, the perfect review crew: Gael’s companion, my date, another couple. It could be any type of cuisine, newly opened, old reliable, anywhere. Always a surprise.

She wore a broad-brimmed hat hoping to hide her face, anonymity paramount — just the average Joe customer, special treatment would skew the deal. (Although savvy owners, many of whom she knew quite well, had her picture tacked to the wall as she grew more powerful, able to make or break a reputation.) Stately, hefty, she was a presence even undercover. “In my life I’ve easily lost 500 pounds but for some reason they keep finding me.”

The review began the moment we entered — what was our first impression of the ambience? Old-fashioned Italian, Chianti bottles hanging from the ceiling, the obligatory painting of a seaside boat, red-checked table cloths, cozy, or modern, chrome cold. How it felt to you mattered to her, set the stage.

I’d go over to the maitre d’ to announce our presence, and she timed how long it took from arrival to being seated. Woe if we had to wait more than 15 minutes, her limit. First, we’d order the house red and white wines — a true test of the wine cellar; Gael’s palate was legendary. We’d ask for bread, and in a second know if it was going to be ordinary — you could tell by the texture, the first bite — or as good as Zabar’s, the gold standard. Her fave: Italian coarse whole wheat.

Then, the waiters, a category of their own. Surly: surely French. Bubbly, reciting a whole list of specials by heart, friendly: likely an out-of-work actor. Romantic: inevitably Italian.

(A footnote: When Gael did a three-part piece, “That’s Italian,” covering every Italian restaurant in all boroughs, I gained 10 pounds — pizza, pasta, deadly. Once when I mentioned that it was the first time I’d ever been in an Italian restaurant where the waiters didn’t flirt, the line made it into her piece.)

She’d visit a restaurant three times to make sure everything had been sampled. If this was the first, guided by Gael’s sure hand and our tastes, we’d order six different appetizers, entrees, desserts. We’d eat one-sixth of whatever it was, dividing it as best we could, pass the plate to the left, Gael taking notes surreptitiously in her lap and welcoming our reactions.

Amazing to eat such a conglomeration, the tastes so different. We’d comment on each one by one so she could keep track. Hard work, putting a taste into words besides yes or no.

And so it went. Extraordinary culinary sensory experiences.

Gael loved her job for 40 years. “To be tempted and indulged by the city’s most brilliant chefs. It’s the dream of every one of us in love with food.”

When asked what one should bring to tastes and the table as you age, her answer was, “Enthusiasm.”

According to Wikipedia, “A foodie is a person who has an ardent or refined interest in food, and who eats food not only out of hunger but also as a hobby.”

But Gael also knew that for some, food was more a matter of life or death — the elderly. And for them she mobilized tax-deductible support for Citymeals on Wheels, which carries on to this day.

Susan Israelson, a native New Yorker, summers in East Hampton and winters in Palm Beach. She is the author of “Water Baby,” a novel, and co-author of “Lovesick: The Marilyn Syndrome.”