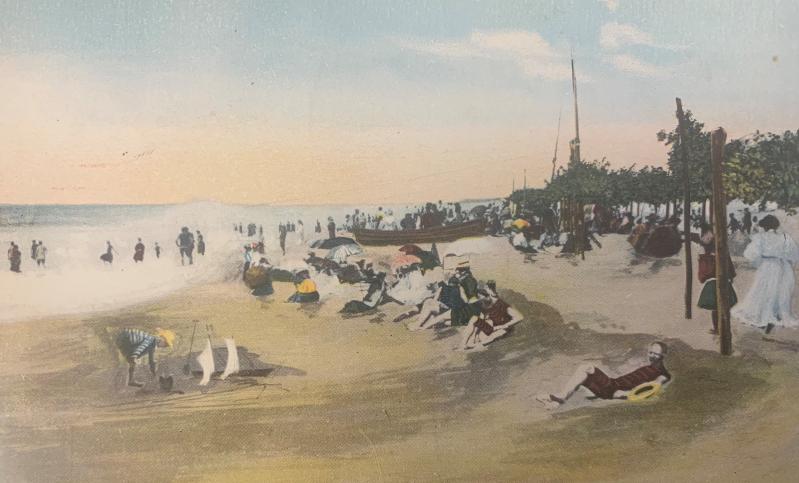 From a circa 1907 East End postcard
By Leah Larsen

The first time I saw Springs was in the summer of 1964, because, though I was a native New Yorker, born and raised in the Bronx, I’d no idea a place so funky but amazingly beautiful existed at the end of our very Long Island.

We’d ended up there that summer because my husband, Carl the poet, had been talked into sharing a funky little bungalow on Gerard Drive, sight unseen, a bungalow so blind to beauty that it turned its back on Accabonac Bay. And why? Because his friend Alan the poet was determined to spend the entire summer fishing.

I, however, was determined to get us and our 2-year-old daughter a temporary respite from the slums of the East Village, having prided myself on never having spent a single summer in the city since I was 8 — the year my dad built us a house in a radical Jewish summer colony in northern Westchester, with the help of Eddie, the drunken carpenter, and floorplans from a women’s magazine.

I was so determined not to break my record, I actually took the radical step of learning to file a long-form tax return to obtain the $750 we needed to fund our transformative summer in the far east.

So off we went, with me behind the wheel of a $50 car my dad found us — after just having passed my driver’s test, because Carl couldn’t drive.

Which is how we’d ended up in a car filled to the brim and its rooftop piled high with all sorts of absolutely necessary childish accoutrements, including a crib, as we made our way not only through complex Manhattan traffic, then a four-lane highway, and finally onto rural roads on which most people, given any opportunity, were only too happy to speed. A trip that lasted four hours, because I didn’t know how to pass and stayed in the slow lane the whole way.

Which is why I slept for a week after we arrived and spent the rest of the summer learning to drive.

But it was a summer well worth the angst, though it began in a curtained-off dining room next to the kitchen as our bedroom, while Alan and his wife and their newborn baby shared the one real bedroom upstairs.

That’s though we had to decamp early on, as we quickly realized we couldn’t handle their drunken fistfights, always conveniently staged directly in front of our curtained bedroom.

Though we spent the rest of that summer in the semi-stuffy attic of our friend Paco the painter, in a house bought by his wife’s winnings on a TV quiz show.

Why? Because Paco, who’d grown up in his uncle’s restaurant in Madrid, made us perfectly turned individual omelettes every morning and glorious dinners, often featuring huge striped bass caught by Alan, at night.

Because we ate like kings for almost no money, buying farm-fresh corn and tomatoes and melons and veggies at Bistrian’s little table on Cedar and North Main and clamming with our feet in Accabonac Bay.

Because we swam near egrets and herons at Louse Point, and in the ocean at Georgica Beach, the artists’ beaches then, with me, who’d learned to swim in a little lake, so blissfully ignorant of the meaning of those little red flags fluttering about that I was sure it was fine to come back up, barely able to breathe, after being tumbled about by those fierce ocean waves.

Because there were big communal picnics by the ocean, with our kids, including Shana, running about chasing seagulls, racing or toddling in and out of the water, busy building their sand castles and refilling their moats.

There was even a real old-fashioned clambake, complete with seaweed and heated stones, at the end of Gerard Drive, where the guys dug deep, despite the cloud of tiny piping plovers divebombing us in the hope of scaring us away, no matter what.

Because we visited poets and artists Carl knew in their studios and in their homes and Carl read at poetry readings still held at the maritime building in Amagansett, in addition to playing in the Artists and Writers ballgame.

Because we went to opulent parties thrown by rich people and danced to rock ‘n’ roll with our friends at the Laughing Stock, where Paco cooked paella twice a week.

And because summer ended spectacularly, with Paco organizing an artistic assembly line of cutters and preppers as he cooked paella for a hundred of us in a giant iron washtub placed over the small fire he made in the tiny circle of stones he’d created in his sandy backyard.

Because we had a wonderful time in a funky, beautiful place filled with the glorious, golden sea light so beloved by artistic types that they’ve always been drawn to it.

And because that’s when I learned to love the East End.

Leah Larsen lives in Springs in the house she bought more than 20 years ago.