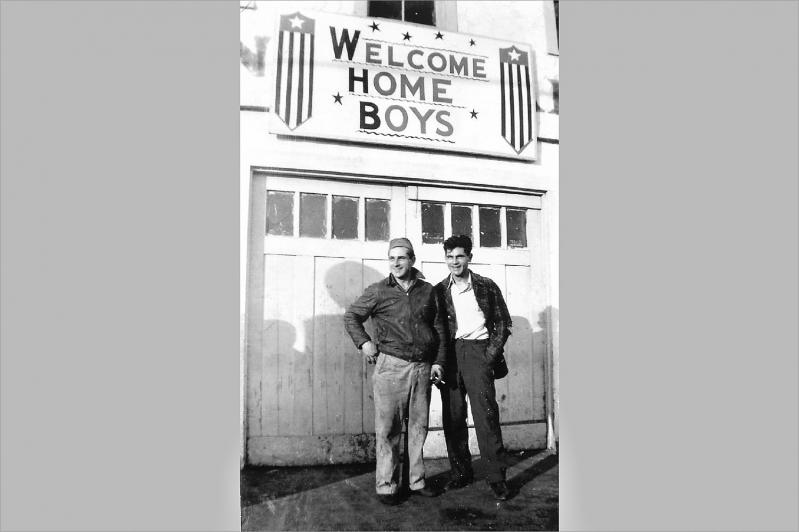 Charles DiSunno, left, and Joseph DiSunno back home in Amagansett after the war.
Courtesy of Marie DiSunno Lombardi
By Bobby Cote

Joseph DiSunno’s outfit was about to be surrounded by the Germans at the Battle of the Bulge in World War II. On Dec. 16, 1944, in a last desperate attempt to win the war, Hitler had deployed 250,000 soldiers in the 80-mile section of the Allied front protected by 80,000 American troops in the Ardennes forest.

The terrain was considered virtually impossible to push an army through, so the attack was least expected. If successful, Hitler would push the Allies all the way back to Belgium and regain control of France, possibly changing the outcome of the war.

American troops were particularly vulnerable. They were outnumbered three to one, and a thick fog allowed the Germans to slip in without being detected by American airplanes. The battle raged for weeks. It became the largest battle fought on the Western Front. In all there were approximately 600,000 American troops involved at that front. We had 20,000 killed, 20,000 captured, and 40,000 wounded. At one point, DiSunno and his truck passengers were in real and present danger of being added to those statistics.

As the German Army “bulged” through the American defenses, DiSunno’s outfit was about to be surrounded. They were given an order to retreat. DiSunno had enough gas to move out, but there was no evidence of oil on the engine’s dip stick he used to check the oil level. He soon found there was no oil to be had from other drivers in the caravan either. Gas and oil, and most other logistics essentials, like food and water, are generally in short supply in an active war zone. Without oil the engine would too soon overheat and self-destruct, putting DiSunno and his passengers in danger of being captured or killed.

He creatively reached back to the knowledge he had acquired working with his four brothers in the family’s repair shop. DiSunno’s Garage, on Montauk Highway in Amagansett, was established in 1928 when Joseph was only 4 years old. Joseph, 21 at the time of the battle, had grown up working in the garage with his brothers. While Joseph and Charles (who was two years older) were at war, their older brothers Amato (Mike) and Anthony (Tony) remained at home, keeping the family business going. Steven, the youngest, was only 15 in 1944.

Growing up in the family automobile repair shop may have been the reason that Joseph was designated a combat truck driver and Charles was a truck mechanic at a repair depot in Italy.

When Joseph was describing his experiences in the Battle of the Bulge decades later, the obvious question was, “So what did you do about having no oil for your truck?”

Answer: “I added water to whatever oil was left in the engine, creating enough oil/water volume for the oil pump to circulate the mixture throughout the engine. That provided enough lubrication to keep the truck running for another 50 miles before the engine self-destructed. And that was enough to save us from being overtaken by the German Army.”

Joseph did get a chance to visit his brother Charles in Italy during the war. A family photo shows Charles at work in his fatigues and Joseph neatly dressed in his travel uniform.

After the war, they both returned to Amagansett to find a “Welcome Home Boys” sign hanging on the front of DiSunno’s Garage. Everyone the family knew at the time was invited to a great celebration in the family home above the garage. Their parents hired a local band led by a family friend, Jesse Rodriguez, and served enough food to feed an army, as was their way.

I remember looking up at that sign at age 6 and slowly deciphering the words. The music played long and loud on that Saturday night, and it sounded like everyone was having a hell of a good time. There had been a lot of stress built up during the war, and the big celebration was a welcome relief to all, as well as to “the boys.”

Mike and Tony went on to develop their own businesses, leaving Joseph and Charles to run the garage. They bought the business from their father in the early 1950s and upgraded the name to DiSunno Motors. They had been selling Studebaker cars and trucks for a long time, but when Studebaker went out of business in the mid-’60s, the brothers took on the Dodge line of vehicles and became the Dodge Boys.

Joseph and Charles ran the Dodge dealership until they retired and closed the business in the late ’70s. The building was sold to Joseph’s son, James, who converted it to two apartments upstairs and commercial space at the street level that still includes the garage area where the DiSunno boys once repaired cars.

Joseph DiSunno and all of his Greatest Generation siblings are no longer with us, but their legacy lives on.

Bobby Cote is Joseph DiSunno’s nephew. He lives in Amagansett.