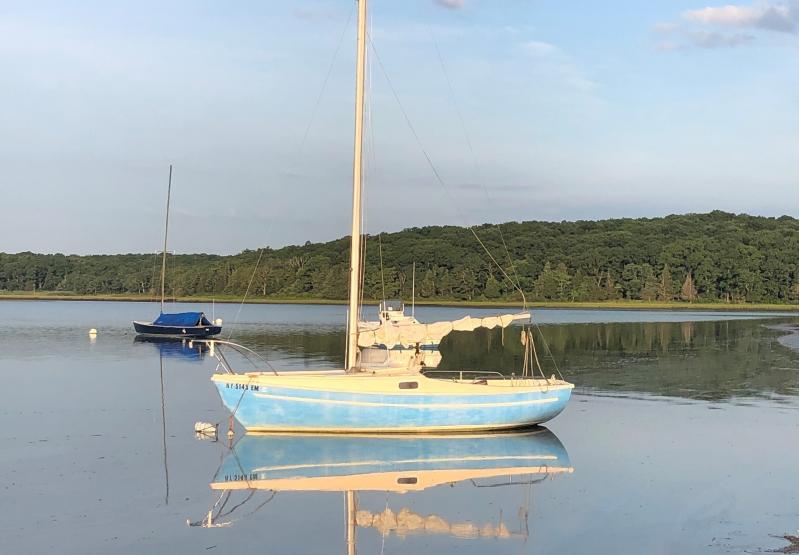 Duane came and took the boat away last week. After months of struggling to do it, I asked him to take it back to his home — not because I do not love the beauty of it and the worlds it promised me, but because at some point I have to face reality and not just my dreams. I did not see it leave but realized my loss when our children told me, “Uncle Duane came by and took the boat today.”

I love sailing — flying across the water with the waves and wind the only sounds, the splash caused by the waves pounding into the side of the boat cooling my sun-soaked face. The birds floating in the sky. Alone in the sea with the land cocooning us from the dangers of the bigger world. I want to sail. But a sailor I am not.

Yes, I was certified to teach sailing and taught the mechanics of it at a camp on Three Mile Harbor for several summers. My father taught the East Hampton Town sailing program for years, decades even, caring for those boats as though they were his own. He loved sailing and intuited the water, the boat, and its needs. And he sailed. Duane is like my father — he sails. I only dream of sailing.

When Tom and I were newly dating we came out to visit Duane and Patty in Patchogue. He drove his sailboat down to the water and launched the boat with instructions on how to bring it back. We spent a few hours enjoying the water, the wind, and each other. On the trip home to Duane’s with the boat on the trailer, we forgot to take the mast down and split it in two when we went under some power lines. Duane was undeterred from his goal of having us share his love of the water. He is not easily dissuaded even by a broken sailboat mast — a trait that proved more critical in his future sorrows, which paled the broken mast.

A few years ago, and after Duane and Patty’s loss of their only son, Duane gave Tom and me one of his sailboats. It is graceful in lines and pretty in color. It sits on the water peacefully reaching to the sky. Mostly Tom and I enjoyed sitting at the Creek looking at it and dreaming. Occasionally, we braved the cold waters of Northwest Creek to sit on it and drink some wine while the water lapped against the boat and the gulls called out victory over a broken clam. “Caught!” they called.

The last day of Joseph’s visit to us in September 2019, I met him and Tom at the Creek to take the sailboat for a lunchtime ride. It was windy and rough. We loosed the boat from its mooring and Tom and I climbed aboard. The wind and current pushed us into the shore. Joseph worked against the current and pushed us away from the shore while maneuvering around the moorings of our neighboring boats. Tom’s face went pale and tight. He insisted we abandon the ride.

“I don’t want to go,” he kept saying, clutching the sides of the bench and even starting to climb out. He looked scared to death. Joseph and I were confused at his unaccustomed fear, and insisted we go on. We did and the ride proved lovely. We flew across Northwest Harbor with the wind filling our sail. We sailed toward all the monuments that marked our life together, Tom pointing some of them out: Grandpa’s beach, Grace Estate, Cedar Point, Mashomack Preserve, Sag Harbor Cove, and Barcelona Neck.

The boat’s return with Duane was accomplished without a hitch, and in that way called to mind a Calvin Coolidge quote our mom used to note: “If you see 10 troubles coming down the road, you can be sure that nine will run into the ditch before they reach you.”

Tom and I lived most of our married life with Coolidge’s optimism, but it seems Tom sensed his collision was coming soon — just not when either he or I expected it.

A week after our ride across the bay, Tom died.

Of all the layers of sorrow and loss from Tom’s death, one is the loss of the protection of my dreams; Tom allowed me my dreams and kept us on an even keel. I still go to the Creek and stare at the water and the rushes and the wind-stunted trees. The seagulls still call their victory and the boats still point to the wind and reach for the sky, but my boat is gone.

Theresa Koncelik Quigley is a lifelong resident of East Hampton’s Northwest Woods. She is general counsel and executive managing director for Saunders & Associates.