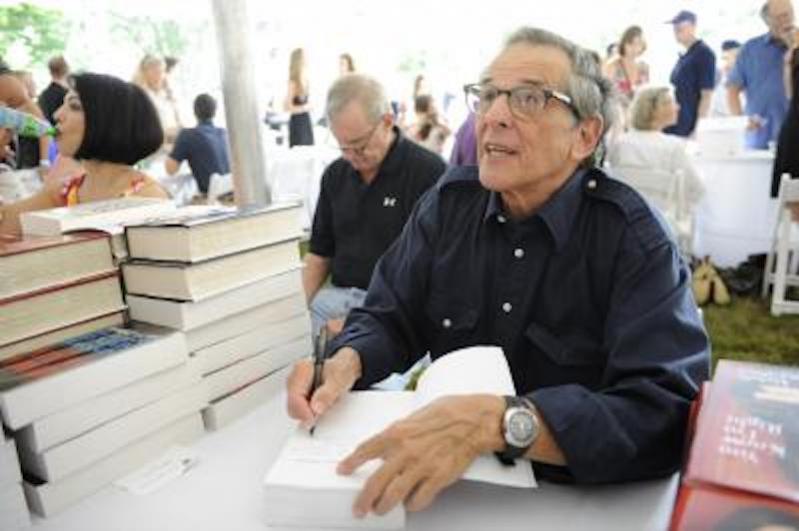 Robert A. Caro signed books at a past Authors Night.

This year, because of pandemic restrictions on gatherings, the format will be one-on-one interviews with authors, an exception being Julie Andrews and Emma Walton Hamilton, who co-wrote a memoir of Ms. Andrews's career and life, "Home Work: A Memoir of My Hollywood Years." Bridget LeRoy will engage them in conversation on Aug. 7 at 4 p.m. Time for questions will follow each interview.

On Aug. 6 at 6 p.m., Ms. LeRoy will speak with Harlan Coben about his latest thriller, "The Boy From the Woods."
Alec Baldwin, the Authors Night honorary co-chairman, will interview the comedian and author Mike Birbiglia about his book "The New One: Painfully True Stories from a Reluctant Dad" on Aug. 8 at 4 p.m.

Robert Caro sits down with Douglas Brinkley, also Aug. 8, at 6 p.m. Mr. Caro's newest book, "Working," is a collection of his experiences as an author and researcher on subjects such as Robert Moses and Lyndon Johnson.
Other authors taking part include Neal Gabler, talking about his two-volume biography of Edward Kennedy, and the footwear magnate Steve Madden.

Ken Lipper will interview Allison Pataki and former New York Gov. George Pataki about their books: a novel by Ms. Pataki, "The Queen's Fortune: A Novel of Desire, Napoleon, and the Dynasty That Outlasted the Empire" and the former governor’s "Beyond the Great Divide: How A Nation Became A Neighborhood," on Aug. 6 at 4 p.m.

Other authors to choose from are the Washington Post's Philip Rucker, co-author with Carol Leonnig of "A Very Stable Genius: Donald J. Trump's Testing of America" Aug. 6 at 8 p.m., J. Courtney Sullivan at a day and time to be announced, and an Authors Night perennial favorite, Dr. Ruth K. Westheimer, whose new book is "Sex for Dummies," on Aug. 9 at 4 p.m.

The nitty-gritty on taking part is that Authors Night has its own website, authorsnight.org/dinners, where the $50-per-event tickets can be reserved.