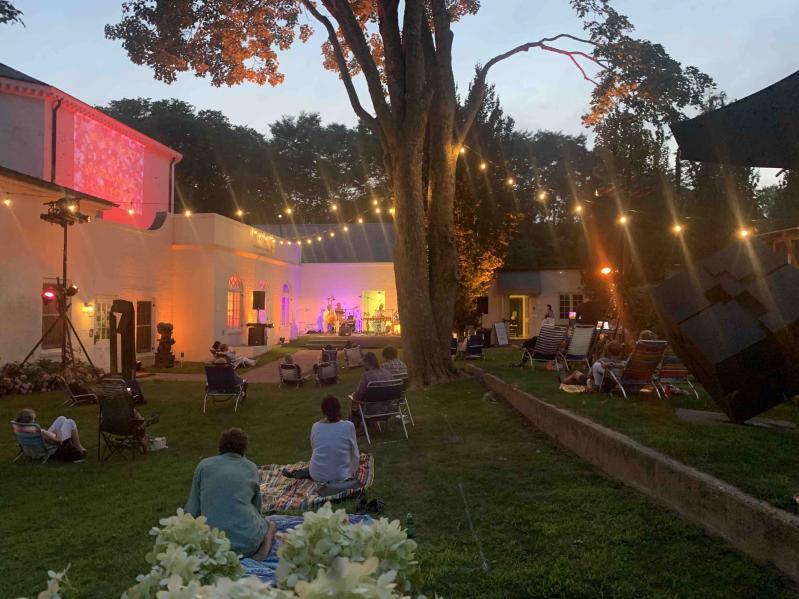 Laurie Anderson will play with Christian McBride in an intimate jazz concert on Sept. 5 on the rear lawn outside of Guild Hall in East Hampton.
By Jennifer Landes

A fortunate few will be able to attend an intimate gathering to hear Laurie Anderson and Christian McBride reprise their critically acclaimed and occasional concert series at Guild Hall on Sept. 5.

Ms. Anderson will play violin and synthesizers and Mr. McBride will be on bass. They will be joined by Rubin Kodheli, who will play cello and also played with them at previous concerts in New York, San Francisco, and Los Angeles.

Ms. Anderson is a musician and performance and visual artist. Mr. McBride is a Grammy-winner whose career includes performances with small ensembles and big bands. Mr. Kodheli is a musician and composer whose music blends rock, jazz and classical influences. His collaborations include work with Philip Glass, Meredith Monk, Joan Jett, Tom Harrell, and Snoop Dogg along with previous work with Mr. McBride and Ms. Anderson.

The concert will be held at 8 p.m. in Guild Hall's outdoor theater, which is set up in its rear garden. The ticket price is $500 for one "lawn circle," which seats a maximum of two people within a six-foot circumference. Each circle is six feet away from the others. Attendees have been advised to take blankets and beach chairs.

Tickets can be purchased on the Guild Hall website, where there are further details on the event. According to the venue, tickets are extremely limited and selling quickly.