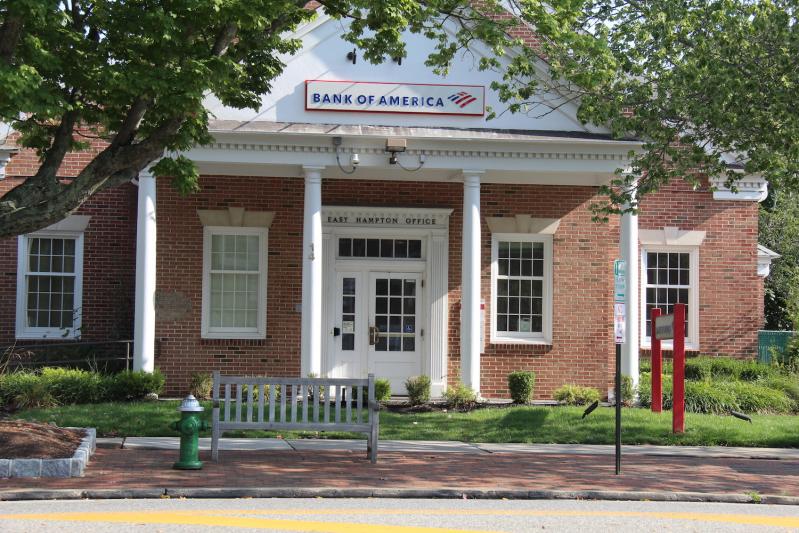 If Bank of America has its way, three 12-foot light poles would be installed a foot from the sidewalk by its East Hampton branch.
Durell Godfrey
By Christopher Gangemi

At an East Hampton Village Design Review Board meeting last week, village code was found to be in direct opposition to a state law that sets standards for lighting around automatic teller machines, or A.T.M.s, and the Bank of America branch at 14 Newtown Lane was uncomfortably caught in between.

At issue is the 60-foot radius of light required under the New York State Safety Act, from dusk to dawn, around an outside A.T.M. The Newtown branch has three machines, two inside a vestibule, and the third  outside, a drive-through.

To meet the state standards, the bank proposes to upgrade 18 fixtures and add seven more. Five new poles, ranging in height from 12 to 20 feet, with lights on top, would be added. Three of the poles would be only a foot from the sidewalk.

“Part of the reason we’re in front of you is, there is a direct conflict between what the state requires and the municipal zoning code — we can’t meet both at the same time,” Jake Modestow, a lighting professional with Stonefield Engineering and Design, told the design board.

Vincent Gaudiello, a civil engineer who consults for the village, wrote to the board on Aug. 16 that “the applicant’s design professional has satisfactorily addressed our comments and engineering approval is recommended.” Members, however, were not so quick to approve the plan.

Aside from ensuring that the lighting hues would be warm and not a “cold blue” color, the D.R.B. had no issue with the bank’s upgrading the existing fixtures. The problem was the three poles, which would be mounted directly in front of the bank building, just off the sidewalk.

“Does any of that lighting shine off the property?” asked Sherrill Dayton.

“Outside the property line we do have light in excess of the allowed illumination,” said Ian Heanue, a consultant for Bank of America.

Lighting from other sources, such as neighboring stores, could not be used to meet the state requirements. “The lighting has to be controlled by the bank,” said Mr. Modestow, explaining that should a neighboring property turn off its lights, it could create a dark spot.

“That seems like an awful amount of lighting on the front of the building,” said Mr. Dayton.

“If they weren’t needed, the bank would remove them,” said Mr. Modestow.

According to state law, the bank can request a variance if it provides “substitute security measures that are substantially as safe.” Further, it can request “exemptions from such measures.” The village would have to sign off on either a variance from the state law, or an exemption, presumably to release the bank from any liability.

“Our code is pretty clear that you’re not supposed to have light trespass off the property line,” said Billy Hajek, the village planner. “I don’t know of anything like that on Newtown Lane, where there are 12-foot poles on the sidewalk.”

“It seems like overkill to me,” agreed Mr. Dayton.

“Do we really need that in the Village of East Hampton?” said Robert Caruso, the chairman of the D.R.B. If this is approved, “that means every bank could have lighting that’s going to go over the sidewalk and onto cars? Is that what we want here?”

Timothy Hill, a village attorney, said it wasn’t clear if the lighting requirements were a “preference” or an absolute mandate. His office could not be reached for clarification.

Mr. Caruso offered to approve everything except for the three poles, but the bank wasn’t quite done yet.

“We’re not on Broadway in Manhattan, are we?” asked Mr. Caruso.

Mr. Heanue indicated that the bank would not be happy if only part of its lighting plan were approved. Without all the poles, he said, it “would not achieve compliance with the New York State code, which is the end goal.”

Mr. Hajek suggested the designer and the consultant return to the bank “to come up with something the board finds a little more acceptable.”