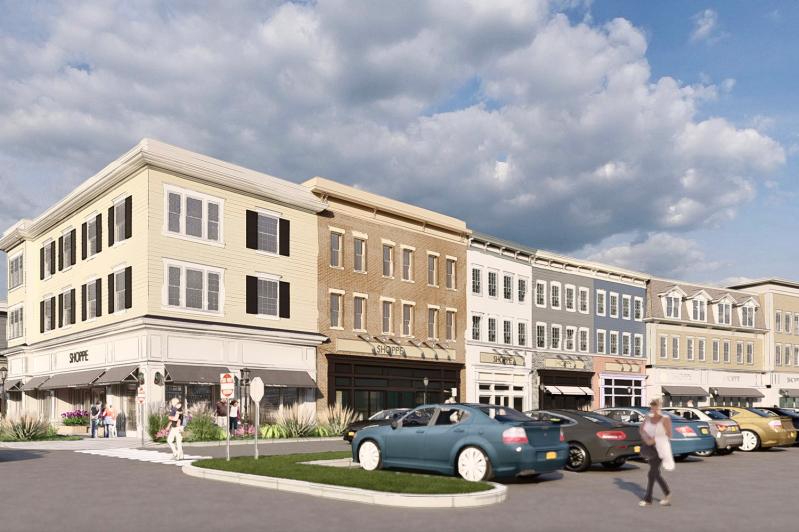 A rendering by the architects shows the Rose Street side of the Sag Harbor Residences as a retail thoroughfare.
Beatty Harvey Coco Architects
By Christopher Gangemi

The day after the Sag Harbor Village Board passed a long-anticipated measure allowing for affordable work-force housing developments in the office district of the village, a 79-unit whopper was proposed. The project seeks to combine five parcels owned by several limited liability companies of which Adam Potter, the founder of the nonprofit Friends of Bay Street, is the principal.

Its estimated cost is $70 million.

The 36-foot-high, three-story buildings would not only add housing units — the largest of which would be a 950-square-foot two-bedroom, two-bathroom apartment — but also over 34,000 square feet of new retail space. It would be behind Sag Harbor’s Main Street bounded by Bridge Street on the west, Rose Street on the South, and a municipal parking lot off Meadow Street on the east.

Businesses, including Espresso and K-Pasa, that would be displaced by the potential new construction of Bay Street Theater on Long Island Avenue and the possible demolition of 2 Main Street, would receive preferential treatment for leases in the new complex. Southampton Town is in negotiations to purchase 2 Main Street with money from its community preservation fund.

Mr. Potter said by phone that the project is not financially linked to the possible construction of a new Bay Street Theater. “It’s a completely separate project,” he said. Whether to expand the John Steinbeck Memorial Park or to accommodate a new Bay Street Theater, “there’s a high probability” that the building at 2 Main Street and the one containing the Water Street Shops will be demolished, Mr. Potter said. “We don’t want to lose local businesses.”

A large U-shaped building would open onto Bridge Street, where there would also be a one-story free-standing retail store surrounded by a grassy courtyard. The project would transform Rose Street into a retail thoroughfare. Running roughly perpendicular to Meadow Street, the unbroken facade of a large building would dominate. On the ground floor on the northeast corner of the building would be services for the apartment complex residents, with a laundry area, mail room, offices, and a trash facility.

Tiffany Scarlato, a land-use lawyer from Sag Harbor, is representing Mr. Potter and the developer, Conifer, “a full-service real estate company specializing in the development, construction, management, and ownership of high-quality, affordable housing communities.” She has been in the land-use business for 22 years and said, “This is the most important project I’ve ever worked on. . . . Work-force housing is so desperately needed.”

According to a F.A.Q. sheet on the project, “The majority of the apartments will be set at 60 percent average median income” for Suffolk County, “and the current rent is $1,542/month for a one-bedroom unit and $1847/month for a two-bedroom unit.”

Not everyone is convinced. “It’s a Trojan horse disguised as a gift of affordable housing,” said Maziar Behrooz, an architect and village resident. He said it was “architecturally misplaced” and that to make money back, the ground floor retail shops “will have to be rented out to the highest possible head tenants” driving mom and pop shops out.

“It will have the effect of a fake historic village like Disney World,” he said. Ultimately, he fears it will make the village “a much less affordable place to live.”

Mr. Potter said the funding the developers would receive from the state, with incentives, will afford them the opportunity to build the housing. “I don’t understand where the Trojan horse is,” he said.

Mr. Behrooz also worried that the rooftop placement of 81 condenser and two heating ventilation and air-conditioning units would turn the building into an “HVAC sound machine,” with noise bouncing from the backs of the nearby Main Street buildings.

Another issue for any development in Sag Harbor, and especially one of this size, located in an area prone to flooding, is parking. The current plan, which shows only 27 to 30 delineated spots, seems scant for a 79-unit apartment dwelling that includes 34,000 square feet of commercial space.

Mr. Potter said that a parking plan will be announced shortly.

Bob Weinstein, a co-director of Save Sag Harbor, a volunteer civic organization whose goal is to preserve the cultural and economic well-being of the village, said the group commends the recent efforts of the mayor and trustees to “alleviate the affordable housing crisis.” Since the application is not yet formalized, he would not directly comment on the renderings. However, he said, “it will be critical for the public and the relevant boards to pay close attention to the massing, scale, design, and materials of this development, and to consider its potential impact on traffic and parking.”

He also said a project of this size “should ideally be considered in the context of a comprehensive plan for Sag Harbor, and we support the development of such a plan.”

Others were optimistic. Bryony Freij, a village resident and one of the leaders of East End YIMBY, a housing advocacy group, said “The benefits to the village are endless when we make housing a possibility for those we rely in in our community. While there are many details that need to be ironed out, we at East End YIMBY are confident that the approval process in the village will ensure a positive outcome here.”

“It’s encouraging that a new project has already come forward,” said Mayor James Larocca. “It’s a dramatic project, based on its size.”

He said that writing the three new pieces of code to confront the issue of affordable housing has been academic to this point but has now moved to the practical phase. The 79-unit complex, referred to by Beatty Harvey Coco Architects as the Sag Harbor Residences is the first proposal under the new statutes. Because part of the new legislation transferred the special exception review and approval from the planning board to the village board, he now finds himself in a regulatory role and therefore, unable to comment much.

He was hopeful that an informal discussion of the project, however, to which the public would be invited, could happen even before a scheduled July 12 board meeting.

“We’d love to do this quickly,” said Mr. Potter. “There’s a critical need for affordable housing in Sag Harbor.”