Sea level rise will transform the town as we know it 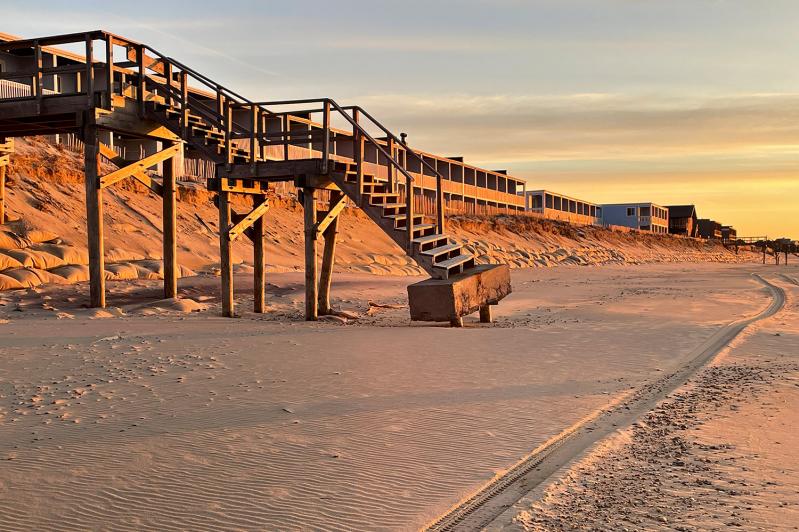 A draft of East Hampton Town’s Coastal Assessment and Resiliency Plan calls for strategies to accommodate, protect, and retreat from rising seas, especially in areas like downtown Montauk, above.
Jane Bimson
By Christopher Walsh

The currently projected range of sea level rise “will transform East Hampton into a series of islands with permanent submergence of low-lying areas as early as 2070.” That is the ominous conclusion that leads a draft of the town’s Coastal Assessment and Resiliency Plan, issued last week.

The long-term effects of climate change will increase the town’s vulnerability to coastal flooding and shoreline erosion, according to the draft plan, known as CARP and prepared by consultants to the town. “During the next 30 years, the chance of experiencing a flood event with a magnitude similar to that of the Hurricane of ‘38, at least once, is about 60 percent,” it concludes.

“Sea levels have risen about 1 foot over the last 100 years and the future rates of sea level rise are projected to be much greater,” between 8 and 30 inches over the next 30 years, according to the draft plan. The town’s current coastal risk level is high, the plan states, and “will increase acutely in the near term and profoundly over the long term due to the effects of climate change.”

About half of the town and East Hampton Village’s 32 beaches are currently retreating, and all are predicted to retreat in the future due to sea level rise. “The effects of current and future beach erosion will be narrowing beaches, impacts to recreational use, increased risk of dune and bluff erosion, and loss of beach habitat,” the plan states. “Narrowing of beaches is exacerbated where development prevents natural inland beach migration.”

The draft plan is meant to guide implementation of policies and projects to reduce the town’s vulnerability and facilitate adaptation to a changing environment. It will be presented and discussed at a town board work session this month. The board will subsequently vote on its adoption. If adopted, work on implementing its recommendations will begin.

In order of priority, the plan identifies key risks. The first is shoreline erosion, which the plan says is now affecting about half of the town’s 70 miles of shoreline, threatening natural resources, private property, economic activity including commercial retail and resort structures, and loss of land.

The town’s transportation system is “highly vulnerable to coastal flooding,” the plan states, and the frequency and severity of storms due to climate change and sea level rise will increase that vulnerability. During what is at present considered a once-in-100-years flood event, it predicts 35 to 45 miles of town roads being flooded and impassable. Intense precipitation, another manifestation of climate change, may also impact transportation systems.

A third priority covers imperiled areas that are particularly vulnerable to the combined effects of coastal flooding, sea level rise, and shoreline erosion. These include several areas in Montauk such as its downtown and the areas around Fort Pond Bay and the docks, as well as Gerard Drive and Louse Point in Springs.

The fourth priority looks at future property damage and the financial risks associated with it. Property damage losses “will increase significantly in the future due to sea level rise and increased flood risks,” the plan says.

The draft plan recommends an approach integrating “accommodate, managed retreat, and protect” strategies. This should include “relocation and property acquisition of select, very high-risk property” to be converted to open space and conservation land.

A managed retreat in downtown Montauk, in which vulnerable properties would be abandoned in favor of inland property through a transfer-of-development-rights mechanism, was discussed in connection with the hamlet studies that have since been incorporated into the town’s comprehensive plan. At the time, some business owners were skeptical, and that component of the Montauk hamlet-study discussion was tabled.

The plan calls for community outreach and funding for relocation and/or property acquisition to begin now, with implementation starting around 10 years from now.

Also to be implemented are shoreline setback review and regulation, along with a program of beach, dune, and bluff restoration, maintenance, and enhancement, and establishment of a “design flood elevation” in building regulations.

Roadway elevation and other roadway flood protection measures are recommended, along with emergency response planning that considers coastal flooding. Beach nourishment should continue, but be limited to approximately the next 15 years while the other components of the Coastal Assessment and Resiliency Plan become effective, according to the draft. A long-term plan would see the select use of levees and flood protection features, possibly including a flood levee located between Fort Pond and Fort Pond Bay. Also recommended is public outreach to communicate the risk, provide resilience information, and coordinate projects.

The draft plan lists the goals of comprehensive and consistent management of shorelines and mitigation of erosion; creation of a resilient transportation system; preservation and enhancement of the town’s natural resources; a reduction of property damage and loss due to coastal flood events and erosion, and funding for resilience and adaptation measures.

“I think we will see momentum pick up, now that this plan is completed,” Alison Branco, the Nature Conservancy’s acting director of climate adaptation who co-chairs the CARP planning committee, said on Monday. “Now we can turn to implementation. There is a wide variety: on-the-ground projects, more planning steps, some legal and code changes as well. Some will be quick, some will take a long time, but we have to get started. There is so much work to do, we can’t wait until we need it that day to start planning. I think everybody sees how vital it is to the long-term viability of the town.”