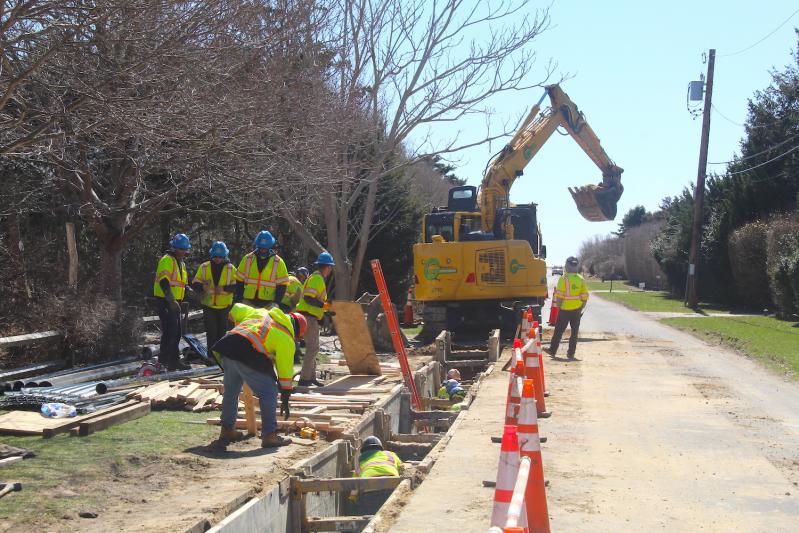 About half of onshore construction for the South Fork Wind farm's transmission cable has been completed, according to a spokeswoman, and “we have not encountered any hazardous materials.”
Durell Godfrey
By Christopher Walsh

News that the South Fork Wind farm’s developers planned to use a privately owned commercial-industrial property on Tan Bark Trail as a site for storing soil and treating groundwater sparked confusion this week among opponents of the project as to whether excavation to install the wind farm’s onshore transmission cable will cause the movement of hazardous perfluorinated chemicals, known as PFAS.

The cable will make landfall at the ocean beach at the end of Beach Lane in Wainscott and travel underground to the Long Island Power Authority substation off Cove Hollow Road in East Hampton. Some residents of East Hampton Town, particularly in Wainscott, are concerned that excavation for the cable will disturb and move an underground plume of PFAS, known as “forever chemicals” that are toxic to humans and wildlife, and the health hazard that could present.

“Just as at the substation site, the Tan Bark Trail site” would have been “utilized for P.S.C.-approved laydown purposes, including storing soil and conducting the required treatment of all groundwater from the construction site. The treated water, in accordance with the project permits, will be taken to an out-of-town disposal facility. South Fork Wind will not discharge any water into the estuary.”

On Monday, however, Jennifer Garvey, another spokeswoman, said that the owner of the Tan Bark Trail site would “not be leasing the property for this use.”

Ms. Wims said that the developers had sought Public Service Commission approval to use the site as “an additional temporary ‘laydown’ area for construction-site materials.” Opponents of the project worried that this would include groundwater containing hazardous waste from the PFAS plume that is understood to have originated at East Hampton Airport, where firefighting foam containing PFAS was used and stored.

Excavated soil and water are now stored at the LIPA substation, Ms. Garvey said, but “it was always a gross mischaracterization to say that the excavated materials we were storing at the site were hazardous.” About half of onshore construction has been completed, she said, and “we have not encountered any hazardous materials.”

To date, Ms. Garvey said, the only groundwater encountered is at the end of Beach Lane, where the transition joint bay, an underground vault where the transmission cable transitions to an underground duct bank, is being installed. “Our need for water storage appears to be quite minimal,” she said. While the developers are obligated to store and treat all groundwater encountered, “that doesn’t mean it’s contaminated,” she said. “It means we have to analyze and store it. Basically, we’re storing clean water” prior to its transport to a facility outside of the town.

At the Town Board’s meeting on April 19, Councilwoman Cate Rogers addressed what she called “misinformation that’s being circulated by opponents of the wind farm.” At her request, John Jilnicki, the town attorney, told the board that the developers had amended their application to the Public Service Commission to include the Tan Bark Trail site for temporary storage and staging. A provision of the Public Service Law “doesn’t allow any local municipality to require permits for this work,” he said. “We’re kind of overridden by the Public Service Commission’s approvals.” The town’s outside counsel for the wind farm confirmed this, he said.

“None of the protocol that’s been laid out in the approved plan changes,” Mr. Jilnicki added. “That all has to be adhered to for handling water.”

Last Thursday, the town board voted to license the developers to use a portion of the town-owned property at 106 Stephen Hand’s Path for temporary storage of vehicles, construction materials, and related equipment used to install the transmission cable, such as conduit and trench boxes. The license agreement, subject to State Department of Transportation approval, does not allow the storage of water or soil removed from the cable route. The developers will pay $1 per square foot per year for what Supervisor Peter Van Scoyoc said last Thursday was around 1.5 acres of the site.

Construction this week along the cable route is to include trenching and installation of conduit on the north side of the transition joint bay structure. There are to be one-way alternating traffic lanes with the potential for closure during construction. The contractor is continuing to use the substation area off Cove Hollow Road as a staging area for materials. Trenching along the Long Island Rail Road between Stephen Hand’s Path and Buckskill Road is to begin this week.