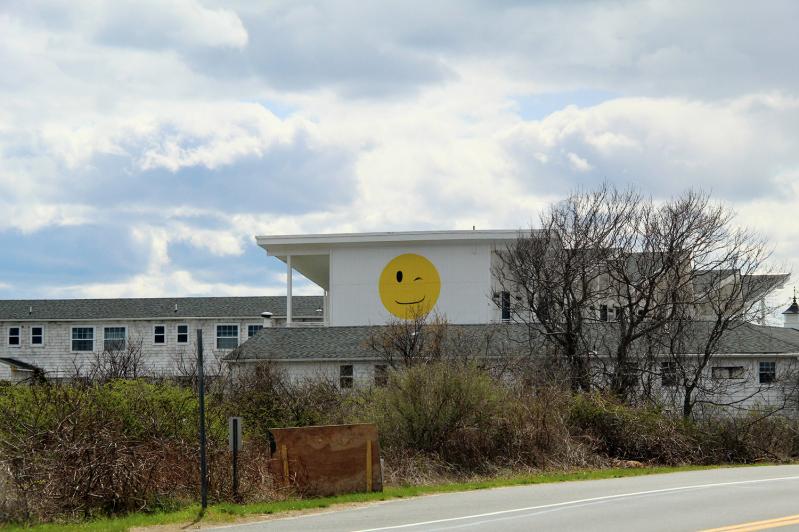 The Hero Beach Club, the Montauk resort with the winking smiley face on its exterior, finally saw some positive reaction to its hopes of serving food to its guests, at the March 23 meeting of the East Hampton Town Planning Board.

“We’ve been in this planning board process for quite a while, since 2017,” said Britton Bistrian, speaking for the applicant. “Our main intent during those past five years has remained unchanged. We want to provide food service for our hotel guests.”

Previously, the resort had applied to convert an entire building to a restaurant use. Citing lack of parking and a Surf Lodge-type situation, with cars parked along the road and “bedlam” right at the entrance to Montauk, the board scoffed at the idea.

Hero Beach significantly curtailed its application. Instead of a sit-down restaurant in a separate building, they are now asking for “a room-service catering kitchen within the existing footprint of a basement on the property,” said Ms. Bistrian. All that would change on the first floor, she told the board, would be a stairway to the basement.

While the hotel is just over the dunes from the ocean, patrons now have no view. “This hotel is on the ocean, but where is the ocean?” said Ms. Bistrian. To remedy that, Hero Beach is also asking to build a 515-square-foot, second-story deck — “not a place for dining,” Ms. Bistrian said, adding that the business is also committed to replace all its conventional septic systems with two on-site wastewater treatment systems.

Board members focused on the basement kitchen, and how it would be used. Hotel guests would have an app, Ms. Bistrian said, with which to order food and have it delivered to their room. There would be no sign out front advertising a restaurant, she said.

“The best way to do it is just to have a use that no one sees, and no one can get into, and there’s no place to eat,” she said.

Still, the board worried about parking and how catering events might affect the equation. An advisory memo to the board from Marco Wu, a town planner, noted that “the motel use itself would require a minimum of 42 [parking] spaces under existing code,” but that currently the site “has a substandard quantity of parking, with at most 11 non-delineated, code-compliant spaces.”

To have enough parking, the planning board had to determine the number of spaces needed for Hero’s principal use, as a motel. It could then require up to 50 percent more of that total, if the basement kitchen were deemed to be a restaurant — i.e., a principal, separate, secondary use. The board also has the authority to waive the requirement for additional parking.

Eric Schantz, East Hampton’s principal planner, told board members that “what they’re applying for is an accessory restaurant” that would be “incidental and accessory to the principal use, which is a motel.”

“We are open to a covenant relating to its use,” said Ms. Bistrian, which would ensure that the restaurant would not serve the public and create a parking problem.

Randy Parsons, a board member, feared that approving an accessory use of a restaurant to a motel while not requiring additional parking would set a precedent.

Samuel Kramer, board chairman, sought to assuage his fears. “If we approve this, it has to be under a very specific set of circumstances,” he said. “Namely, that the kitchen is only going to be used for room service and catering — and to the extent that it involves catering, that’s going to be subject to a mass-gathering application.”

“You’re saying that you find this parking, for a resort and restaurant use, to be adequate,” said Mr. Parsons.

“No, we’re not,” said Louis Cortese, board member. “We’re saying we don’t find the parking adequate, but because of the mitigating factors, we’re relaxing the parking requirements.”

“It’s a question of the verbiage” of the covenant, said Mr. Kramer.

Mashashimuet Park's History and Future
A Conference for Young People to Create Solutions
Get Outside, Get Moving
END_OF_DOCUMENT_TOKEN_TO_BE_REPLACED