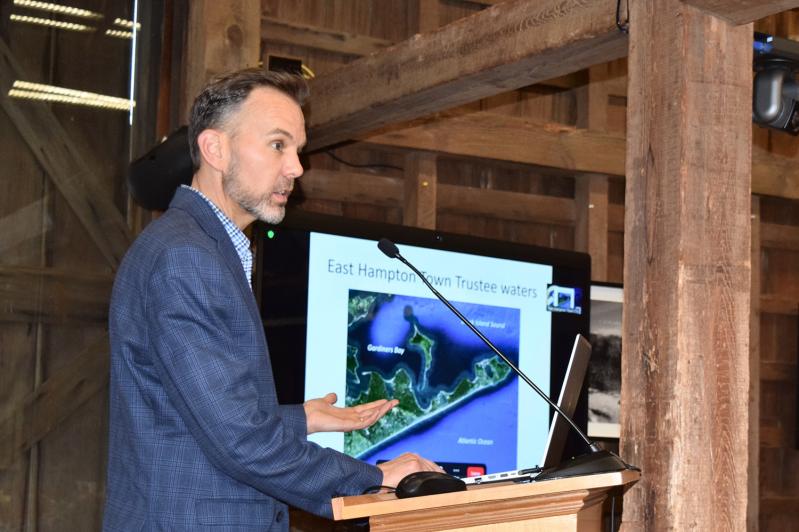 Christopher Gobler of Stony Brook University’s School of Marine and Atmospheric Sciences delivered his annual report on water quality to the town trustees on Monday.
Christopher Walsh
By Christopher Walsh

The findings were mixed at the East Hampton Town Trustees meeting on Monday, when Christopher Gobler of Stony Brook University’s School of Marine and Atmospheric Sciences delivered an annual report that emphasized how human activity on land influences the health of the waters around it.

In 2021, as he has for almost a decade, Dr. Gobler sampled locations in multiple water bodies between May and October, from Wainscott Pond to Fort Pond in Montauk. The waters, with the exception of those in Montauk, are under trustee jurisdiction on behalf of the public.

“In many ways, the Town of East Hampton is set up to have the best water quality in all of Long Island,” Dr. Gobler told the trustees. Surrounded by the Atlantic Ocean, Block Island Sound, and Gardiner’s Bay, strong tidal exchange helps to keep the waters clean.

“But we also know there have been significant changes in land use over the decades in the Town of East Hampton,” he added. “There are some areas that have been quite built out compared to some other areas, and we’ve learned the lesson across all Suffolk County how land use can influence water quality.” Pathogenic bacteria can move from land to water, he said, which can lead to the closure of shellfish beds.

Last year was cooler than the years immediately prior, Dr. Gobler said, which “bodes well for marine resources,” particularly those apparently at the threshold of tolerance, such as the bay scallop, which has experienced a widespread die-off in recent years and for which a combination of stressors including high water temperature is blamed.

Another positive sign was a total level of algae “just about in a good area for most of the year,” with exceptions in Hog Creek and Three Mile Harbor. But the amount of algae directly correlates with the amount of nitrogen loading from land to sea, he said, and nitrogen is the root cause of compromised water, including the promotion of harmful algal blooms.

Three Mile Harbor typically shows the highest nitrogen loads in the town, he said, but total nitrogen levels in fully half of the sites sampled exceed the Peconic Estuary Program’s recommended value of 0.4 milligrams per liter, above which the health of seagrass is threatened. Excursions above that value were measured at three of five sample sites in Three Mile Harbor, particularly at the head of the harbor, three of four sites in Accabonac Harbor, and one of two sites in Hog Creek. Seagrass is an important habitat for shellfish and juvenile finfish.

Alexandrium, a group of dinoflagellates that produce toxic harmful algal blooms that cause paralytic shellfish poisoning in humans, was detected at all four sites monitored in Accabonac Harbor, Dr. Gobler told the trustees, though it was not measured at very high density. An “extremely high” measurement was taken at one sample site in Three Mile Harbor, however, for just one week.

Cochlodinium, or rust tide, was persistent across the East End, Dr. Gobler said, and in Three Mile Harbor in particular in 2021. In 2019, the highest levels of rust tide were measured in Northwest Creek, and in 2020 in Accabonac Harbor and Hog Creek. “The peak of the population in East Hampton waters has been shifting,” he said.

Cochlodinium is an ichthyotoxic organism, another likely contributor to the bay scallop die-off, Dr. Gobler said, along with high water temperatures and low dissolved oxygen. “These multiple stressors are all putting this fishery in a compromised state,” along with a parasite recently detected in bay scallops in the Peconics.

Fecal coliform bacteria above the standard of 14 colony-forming units per 100 milliliters were measured in all four sample sites in Accabonac Harbor, highest near Shipyard Lane and Louse Point, and four of five sites in Three Mile Harbor, particularly at the head of the harbor. The same was true of enterococcus, which the New York State Health Department measures to recommend a water body’s safety for swimming.

All freshwater bodies sampled exceeded the federal Environmental Protection Agency’s standard for algae, Dr. Gobler said. Georgica Pond experienced the most intense bloom of cyanobacteria, or blue-green algae, since 2015, which was eliminated only with the pond’s opening to the ocean. Cyanobacteria also bloomed in Fort Pond and in Wainscott Pond. The latter body, the condition of which has worsened rapidly in recent years, had “very serious blooms” of cyanobacteria last year, Dr. Gobler said, much higher than in 2019 and previous years though not as high as in 2020, when toxin levels were “sky high.”

Sediments are the strongest source of phosphorus and a significant source of nitrogen in Wainscott Pond, he said, and dredging should be considered.

“We’re building a nice data set,” Dr. Gobler concluded, “and have learned a tremendous amount.” He and the trustees were to discuss the 2022 water monitoring program after Monday’s presentation.

Mashashimuet Park's History and Future
A Conference for Young People to Create Solutions
Get Outside, Get Moving
END_OF_DOCUMENT_TOKEN_TO_BE_REPLACED