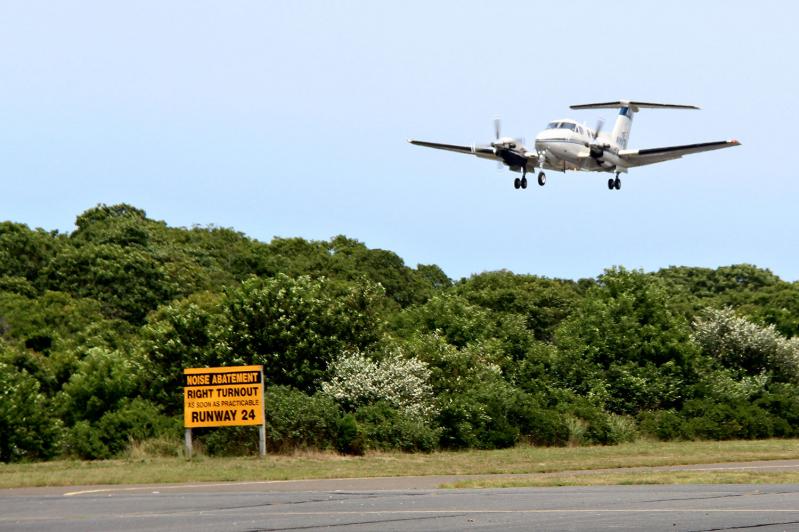 Consultants told the East Hampton Town Board that air traffic at Montauk Airport could substantially increase if East Hampton Airport were closed or restrictions were enacted there.
Durell Godfrey
By Christopher Walsh

Air traffic at Montauk's single-runway airport, in a worst-case scenario, could rise by as much as 34 percent if East Hampton Airport were closed, consultants told the East Hampton Town Board on Tuesday, but a number of factors, including existing limitations there, make a surge of that scale unlikely.

That was one estimate from a draft study of how air traffic would be diverted to other sites, as control of East Hampton Airport reverts to the town upon the expiration of federal grant assurances later this month.

Since May, the town board, after years of pleas from residents of the town and from as far away as Queens to close the airport that they say is diminishing or destroying their quality of life, has been analyzing and discussing the airport and its future via fact-finding presentations, listening sessions, and other outreach. Upon the expiration of the grant assurances, the town could allow operations to continue as they are, enact restrictions or curfews on air traffic, or close the airport.

Previous work sessions have seen presentations on environmental and economic impacts, land use and zoning, and airport planning and operations. Tuesday's presentation focused solely on the diversion of aircraft should East Hampton Airport be closed or certain aircraft be prohibited there.

The town board heard from Sarah Yenson from Harris Miller Miller and Hanson, a consultant on airport matters, on Tuesday. While Montauk's privately owned airport "could support a limited number of East Hampton operations" if the latter is closed or restrictions enacted, she summarized, Francis S. Gabreski Airport in Westhampton Beach would likely see the bulk of diverted operations "since it provides similar services and facilities to East Hampton." The diversion study also looked at impacts of East Hampton's closure on Mattituck Airport and the Southampton Heliport.

Seventy-five percent of East Hampton Airport's annual operations occur between May and September, Ms. Yenson said, with about 25 percent in August alone.

Based on data from the airport for 2015, 2017, 2019, and the first six months of 2021, the draft study, while vague because of myriad variables, unknowns, and qualifiers, concluded that Montauk Airport could see an annual average of almost 16,000 operations should East Hampton's be closed. If East Hampton were closed to helicopters, Montauk could see a staggering increase in that traffic, which now accounts for just 4 percent of operations, to 6,655 per year. Jet operations, which now account for just .5 percent of operations, could total 313 per year. Piston and turboprop planes could number almost 9,000 annually.

But the study also states that, based on the breakdown of aircraft type, Montauk "might expect an additional 374 helicopter" operations — about one more per day than at present — "and 47 jet operations annually."

The figures assume that all traffic diverted from East Hampton would go to Montauk, and none of it to Gabreski, the Southampton Heliport, or Mattituck Airport. Moreover, as estimated in a previous study, around 40 percent of those flying to East Hampton Airport are bound for destinations west of the town; a diversion to Montauk is a likely disincentive for those travelers.

Montauk's runway length generally allows for aircraft with a maximum takeoff weight of less than 12,500 pounds and fewer than 10 passengers. Nighttime operations are prohibited, and jets and helicopters can land only with prior permission. Aircraft parking is limited. Landing fees, which are not publicly known, could further disincentivize flights there. There are no fuel or maintenance services in Montauk, there is limited vehicle parking, and there is no passenger terminal.

The study nonetheless estimates that, of the East Hampton operations that could take place at Montauk, 2,334 would be expected to occur during August, or an additional 75 daily operations.

It is more likely, according to the study, that Gabreski Airport, which has three runways that can support any East Hampton operation, would receive the bulk of flights diverted. But the availability of aircraft parking may not accommodate the entirety of diversion from East Hampton on top of the airport's existing use.

Mattituck and Southampton could support only "a very limited number of operations from East Hampton," the report states. Like Montauk's, Mattituck's airport allows no nighttime flight operations and has no fuel, maintenance services, or passenger terminal, and very limited aircraft parking. The Southampton Heliport is closed at night, offers no aircraft parking or fuel or maintenance services, and accommodates only helicopters.

Meanwhile, the East Hampton Community Alliance's diversion study estimated that 95 percent of existing East Hampton operations would relocate to other airports, 45 percent to Montauk and 32 percent to Gabreski. Ground travel times would more than double, it estimates, and vehicle miles would increase by 185 percent.

Helicopter traffic would primarily move to Montauk and Southampton if prohibited from East Hampton, the report says, and noise complaints would simply increase along the flight paths of the alternative airports should aircraft be diverted from East Hampton.

If East Hampton Airport is closed, said the alliance's Erin King Sweeney, the town "would have zero control over what happens to airspace." The town should beware of unintended consequences, she said, as it "would lose the ability to impact change, whereas today, they have certain control."

Supervisor Peter Van Scoyoc said yesterday that "what we need to do is further refine what the actual likelihood of operations would be" at Montauk in the event that East Hampton Airport is closed or traffic there restricted. Given the understanding that around 40 percent of those flying to East Hampton Airport are bound for destinations west of East Hampton, "you could assume that people will not use Montauk if they're going west," he said, given the additional travel time on land. "There are much more convenient locations to land."

"We believe we have more work to do on refining the study," Mr. Van Scoyoc said. "It has raised a number of questions among board members. I think we will delve into this and try to hone the focus even more to what real-world scenario is likely."