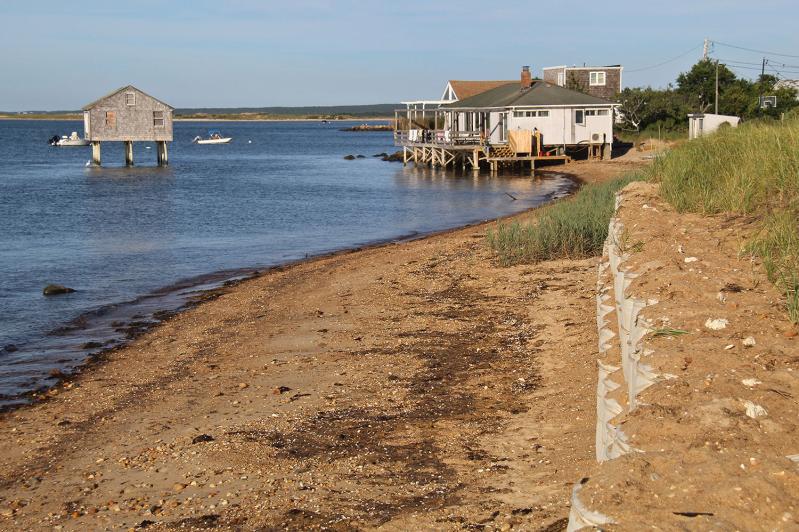 Arrays of geotextile bags like these near Lazy Point, which are authorized only on a short-term emergency basis, have remained far beyond the span allowed by East Hampton Town.
Durell Godfrey
By Christopher Walsh

The installation of geotextile bags that are meant to be a short-term measure but have remained long after their permits' expiration is likely to lead to the amendment of East Hampton Town's zoning code with respect to emergency activities permitted under the protection of natural resources.

Brian Frank, chief environmental analyst in the Planning Department, told the town board earlier this month that the use of geotextile bags, which might be traditional sandbags or sand-filled tubes of various diameters that are stacked and bound together to form a seawall, was added to the code in 2007 to help protect life and property under threat of flooding or erosion.

Geotextile bags are viewed as an acceptable short-term solution, whereas hard structures like bulkheads are unfavorable because of their tendency to erode adjacent shorelines, both damaging the beach and inhibiting public access.

"It's pretty clear from the enabling legislation," Mr. Frank said of geotextile bags, "that their intention was to be used short term, that the environmental impacts associated with shore-hardening structures are reduced or eliminated by the short-term duration."

By permit issued by the building inspector, geotextile bags can be installed for six months, with the potential for a three-month extension. (Applicants must also obtain a permit from the New York State Department of Environmental Conservation, which is valid for five years.) Upon the expiration of the town's permit, they are to be removed and any restoration work completed.

But there are properties in the town at which geotextile bags have remained for as many as eight years, Mr. Frank said. "We've seen them used . . . to address long-term chronic erosion more than these short-term conditions," he said.

The Aug. 10 discussion with the board was not to "out" a property or embarrass its owner, he said. But the geotextile bag arrays effectively create "a six-foot vertical wall" that "is interacting with the shoreline much the way you would expect a six-foot wall to interact, where you're losing coastal resources, you are losing public access, you're creating erosion on adjacent properties."

The existing code authorizes the town to enter a property and remove a geotextile bag array and/or perform restoration work. But "it's pretty apparent," Mr. Frank told the board, "that the existing language of the code is not adequate to make sure that these structures are used the way that they're intended."

"All it's doing," Ann Glennon, the chief building inspector, said of the existing code, "is pushing the next person to come to us to do the same thing, and have this wall go along the beach."

Some properties, said Supervisor Peter Van Scoyoc, "also are noncompliant with the D.E.C. permits with regard to keeping structures covered with sand." The D.E.C. permit stipulates that if a geotextile bag is exposed for more than 30 days it is to be removed.

Mr. Frank and the board agreed that the town and D.E.C. should coordinate their permitting schedules "to make sure that our permits complement each other," he said, "instead of conflict with each other."

Geotextile arrays are at present in place at the end of Bay View Avenue, a private road, and on Cranberry Hole Road, both in Amagansett. Mr. Frank described the ownership of the former as "a bit of patchwork," but public access to the beach is blocked, and, he said, "there's an emergency-access issue as well."

"A number of these areas are suffering from chronic erosion," Mr. Van Scoyoc said. "While we can discuss the short-term emergency aspects, we also will need to focus on longer-term discussion about areas of chronic erosion, and what's really acceptable when you are weighing the value of private property against the public access and public rights over the beach that we hold so dear and want to maintain in perpetuity."

Some of the properties in question, he said on Tuesday, were bought "with a known issue, and little upland to protect them — in some cases, little room to move back. I personally don't think we should be sacrificing our public beaches and access to protect private property in a highly risky area."