Everyone 'demands communication,' no one likes it nearby 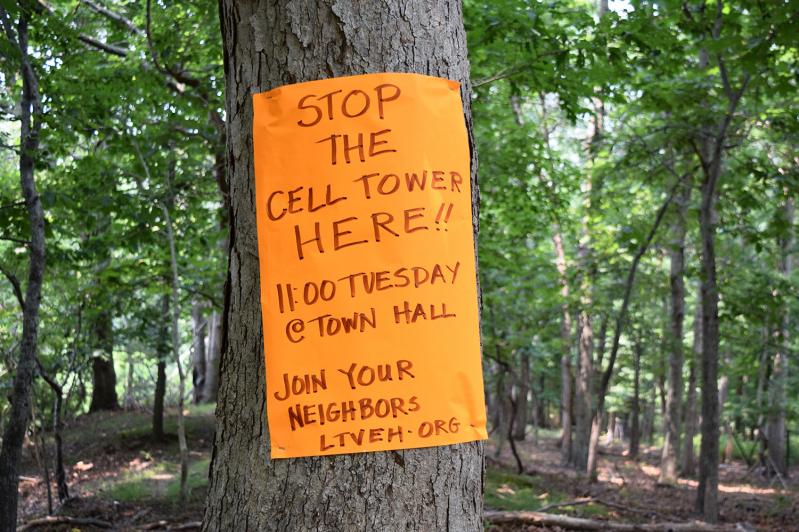 Residents surrounding a wooded area in Springs are loudly opposed to a plan to site a 185-foot monopole for emergency and wireless communications there.
Christopher Walsh
By Christopher Walsh

It seemed that few, if any, were happy when the East Hampton Town Board finally concluded its work session on Tuesday, a six-hour meeting that saw scathing criticism from residents on the town's proposal to erect a 185-foot monopole for emergency and cellphone communication antennas on a wooded parcel in a residential area in Springs, hours before the board heard from officials who explained why the location was perhaps the only suitable site to meet an urgent need.

Last week, the town's communications director proposed a town-owned, 6.9-acre lot bounded by Crandall Street, Lincoln Avenue, Norfolk Street, and Fort Pond Boulevard as the site of a 100-foot temporary monopole or a "cell on wheels," telecommunications equipment mounted on a truck that is also known as a COW, to provide both emergency communications and cellular service from two cellular carriers while a permanent, 185-foot monopole is designed and constructed. Springs is "the last major hole" in the recently upgraded emergency communications infrastructure, Ed Schnell said on Tuesday.

The site, used long ago for mining and today commonly used as a park, is the only practical location to resolve longstanding shortfalls in emergency and cellular coverage, Eric Schantz, the town's senior planner, told the board. It was identified after a plan to erect a 150-foot tower at the Camp Blue Bay sleepaway camp, on Flaggy Hole Road, was scuttled when the property's owner, the Girl Scouts of Nassau County, objected to a tower of that height.

"We do need a macro site, a tall structure somewhere in northern-central Springs," Mr. Schantz said. But other potential sites were deemed unsuitable. The Accabonac Solar plant, which is cleared and owned by the town, is too far south. Ditto the recycling center on Springs-Fireplace Road. Springs School District officials also objected to a tower on school grounds "for a number of reasons," Supervisor Peter Van Scoyoc said. "For the system to work, it would have to be very close to where it's proposed," he said.

A tower cannot be erected on properties acquired with community preservation fund money, intended to preserve open space, nor on nature preserves. There are "very, very few properties within that area of Springs" that would provide the needed coverage and meet town-code-required setbacks and a "fall zone" to protect against debris falling from a tower, or, worse, a fallen tower, Mr. Van Scoyoc said.

A 150-foot-tall tower at the Springs Firehouse, built in 2015 without site plan approval from the planning board, had its building permit revoked by the town's zoning board of appeals, and a State Supreme Court judge dismissed a lawsuit the fire district filed against the Z.B.A. challenging that decision. While several residents asked that it be used temporarily to site cellphone antennas, that, too, is off-limits, Mr. Van Scoyoc said, as its existence was deemed illegal and it is to be taken down.

Councilman Jeff Bragman, who repeatedly sparred with Mr. Van Scoyoc and some of his colleagues on the board, drew applause when he complained about the "complete inadequacy of bringing in the public on this issue." Later, he suggested that the board use emergency powers to unilaterally put temporary cellphone antennas on the firehouse tower.

But much of the discussion happened long after the public comment portion of the work session, during which Springs residents, some of whom said they had not been notified of the proposal and had only learned of it last week, complained bitterly about hazards to their well-being and property values.

"The fact that this proposal has been rushed through without any community notice or meaningful opportunity for community input is an outrage," said Jacki Esposito of Lincoln Avenue. "It also needs to be a matter of public record that a significant portion of our working class neighborhood is comprised of severely under-represented, Spanish-speaking residents. It appears that no one on the town board considered reaching out to these community residents to seek their input. . . . One might conclude that this was intentional based on the assumption that the most vulnerable residents in our town would be the least likely to fight back against this proposal."

Joseph Segilia, who lives near the site, wondered "why the board is rushing through the process during an election year." Like the firehouse tower, building a monopole and ancillary equipment on the proposed site will surely end in litigation, Mr. Segilia, an attorney, predicted, and "further waste taxpayer resources."

Tina Piette echoed Mr. Bragman, saying that the board "should recognize a public safety emergency exists," use its executive powers, "and allow, temporarily, the carriers who stand ready to do it at the existing tower. . . . I'm pleading with the board to consider using, on a temporary emergency basis, the existing tower until the rest of this is worked out for emergency communications."

A 185-foot-tall tower will loom over the 60-foot-tall oak and maple trees, said Alex Rodriguez of Crandall Street, and be visible from multiple sides. "A key to quality of life is walkability and having park-like land nearby," he said. A tower three times the height of trees around it "is an outlandish and extremely sad proposal," he said, charging that the board "rubber-stamped" an environmental assessment form prepared by the Planning Department, one he said is riddled with inaccuracies, such as the assertion that the tower would not be visible from publicly accessible vantage points, and ignores the impact on flora and fauna. "It seems a rush job for an emergency that's been there such a long time."

"I am begging you not to do this," another caller, a cancer survivor, said, referring to radiation emitted by a tower, depreciation of property values, and loss of "this beautiful environmental green space."

Long after most residents had left the meeting room, Mr. Schantz, referring to the proposed site, told the board that "Right now, it looks like it is the only alternative that you have." The monopole would be visible, he said, from some surrounding properties, particularly during the winter, and from Three Mile Harbor Road. "But it is heavily wooded" and the monopole would not be visible to motorists on Fort Pond Boulevard.

Mr. Van Scoyoc had repeatedly asked speakers for viable alternatives. "I understand nobody wants it in their neighborhood," he said, summarizing the board's predicament, but everybody "demands communications where they live."