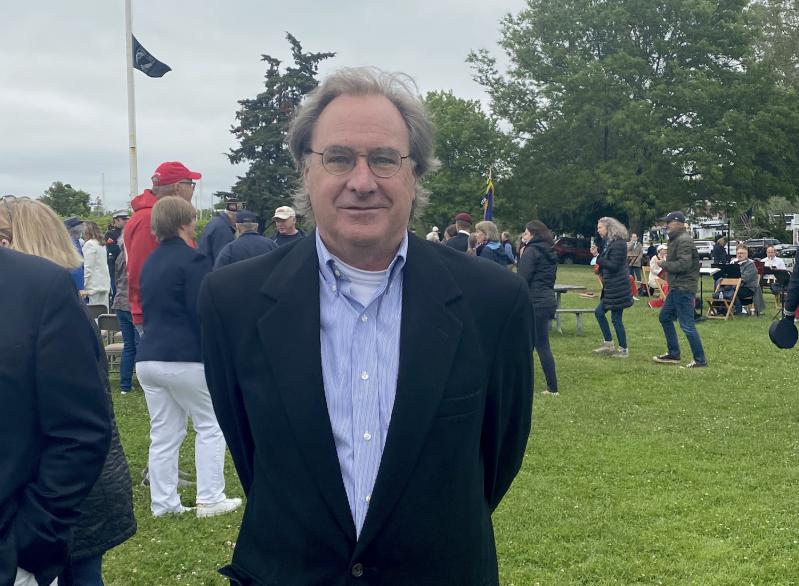 Bob Plumb, a trustee who had supported former mayor Kathleen Mulcahy, has been stripped of all his liaison assignments by the new mayor, James Larocca.
Jamie Bufalino Photos
By Jamie Bufalino

Sag Harbor Village Board members and the public addressed the lingering tension between the village's new mayor, James Larocca, and Bob Plumb, a trustee who had supported former mayor Kathleen Mulcahy's bid for re-election and clashed with Mr. Larocca during the campaign, when the board met on Tuesday.

After being sworn in at the board's organizational meeting last week, Mr. Larocca announced several appointments, but a liaison assignment for Mr. Plumb, who had been the liaison to the Building Department during Ms. Mulcahy's administration, was not among them.

Nada Barry, an owner of the Wharf Shop on Main Street, noted the omission on Tuesday. During the nearly 30 years that she had been attending board meetings, she has never seen a trustee be deprived of an assignment, she said. She encouraged board members to put aside their differences for the good of the village. "You need teamwork," she said.

Mr. Larocca initially said he was still in the process of making appointments, but later said he had decided, at least for the time being, not to have Mr. Plumb serve as a liaison. He declined to discuss the animosity between the two, he said, but the public did not have "a full understanding of recent events."

Aidan Corish, a trustee, implored Mr. Larocca to make use of Mr. Plumb's abilities. "It is incumbent on this board to come together and work together," he said.

"I have reached out [to Mr. Plumb], and it has not worked," Mr. Larocca responded. "What does somebody in my position do when there is no response?"

Ultimately, Thomas Gardella, the deputy mayor, encouraged his colleagues to refrain from discussing the issue in public. "Let's give it some time," he said of the bad blood between Mr. Larocca and Mr. Plumb. "Time heals all wounds."

Also on Tuesday, Mayor Larocca announced that the board will seek to extend a moratorium on waterfront development to Feb. 1, 2022, while it develops a new zoning code for the area. A public hearing on the proposal will be held on Aug. 10.

A previous board imposed a moratorium in the fall of 2020 to give the village a chance to develop a new zoning code for waterfront development. It was due to end on March 1, 2021, but was extended to Sept. 1 as work on the code continued. The second extension "will give us a chance to complete the process," said Mr. Larocca, who took office on July 6.

With the additional time, Mr. Larocca plans to revise the code to include more of the village's commercial waterfront, clarify the uses that would be allowed in the area, and give the village board, rather than appointed boards, a final say on the development of large-scale buildings.