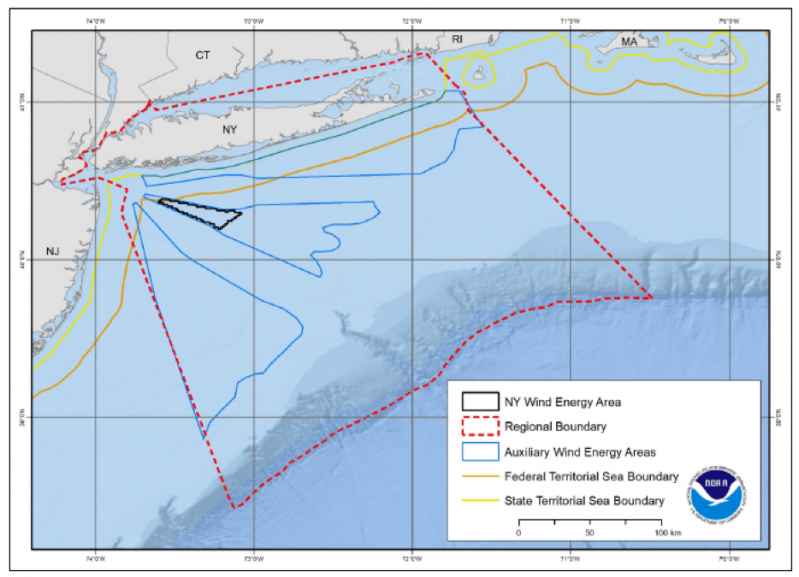 The New York Bight is indicated by a dotted red line.
NOAA
By Christopher Walsh

The federal Department of the Interior announced on Friday a proposed sale for offshore wind development on the outer continental shelf in the New York Bight, an area of shallow waters between Long Island and the New Jersey coast.

The sale would be the first competitive offshore wind lease sale of President Biden's administration, which previously announced a goal of installing 30 gigawatts of offshore wind energy by 2030.

The proposed lease areas have the potential for seven gigawatts of wind energy, sufficient to power more than 2.6 million residences and support thousands of new jobs, according to a statement from the Interior Department.

The proposed sale notice includes eight lease areas in the New York Bight that could be auctioned for commercial wind energy development. A proposed sale notice published in the Federal Register on Friday opened a 60-day public comment period and provides information about potential areas that could be available for leasing, proposed lease provisions and conditions, and auction details. Comments received will be made available to the public and considered before a decision is made as to whether to publish a final sale notice, which would announce the time and date of a lease sale.

To date, the Bureau of Ocean Energy Management, an agency within the Interior Department, has held eight competitive lease sales and issued 17 active commercial offshore wind leases in the Atlantic Ocean from Massachusetts to North Carolina.

BOEM is also seeking feedback on several lease stipulations relating to a commitment to create union jobs and engage with all stakeholders. Potential stipulations include a requirement to include a stakeholder and ocean user engagement summary as part of a lessee's progress in reporting requirements, including a description of efforts to minimize any conflict between the existing stakeholders and the lessee. This provision, according to the Interior Department, is intended to strengthen current fisheries communication requirements and improve coordination between the lessee and fishing communities early in the planning of wind farms.

Other potential stipulations include a requirement to make every reasonable effort to enter into a project labor agreement covering the construction of any project proposed for the lease area, and mechanisms to provide benefits to underserved communities and investments in a domestic supply chain.

Friday's announcement follows several moves by the Biden administration. On May 11, administration officials announced the approval of the construction and operation of Vineyard Wind, an 800-megawatt wind farm to be situated approximately 12 nautical miles off Martha's Vineyard and Nantucket, which is to provide electricity sufficient to power 400,000 residential and commercial structures.

It has also signaled the advancement of a project off the California coast, an assessment of offshore wind's potential in the Gulf of Mexico, and a review process for two other projects off the Northeast coast: Revolution Wind, a 704-megawatt installation to be situated 32 miles southeast of the Connecticut shoreline, and Ocean Wind, an 1,100-megawatt wind farm to be located approximately 15 miles off the New Jersey coast.

The announcement drew praise from Gov. Andrew M. Cuomo, whose administration set a goal of 9,500 megawatts of offshore wind energy by 2035, and from environmental and labor advocates. "The development of green energy resources is one of the most critical components in winning the global fight against climate change," the governor said in a statement, "and the Biden administration should be commended for moving swiftly to advance offshore wind power in the New York Bight. . . . We remain fully committed to working closely with our federal partners on the continued development of the New York Bight. . . ."

Mariah Dignan, the Long Island organizer for Climate Jobs NY, said that the administration "is sending a clear signal that we have a once-in-a-generation opportunity to address climate change and create thousands of good union jobs. We are eager to see a competitive lease sale that includes potential stipulations like [project labor agreements] on construction in the lease area. This is yet another step forward in launching New York's offshore wind industry and creating family-sustaining career opportunities for Long Islanders."

"We need more offshore wind to meet our ambitious clean energy goals under the Climate Leadership and Community Protection Act," said Julie Tighe, president of the New York League of Conservation Voters, "and are glad to see the Bureau of Ocean Energy Management move the process forward quickly and with care."