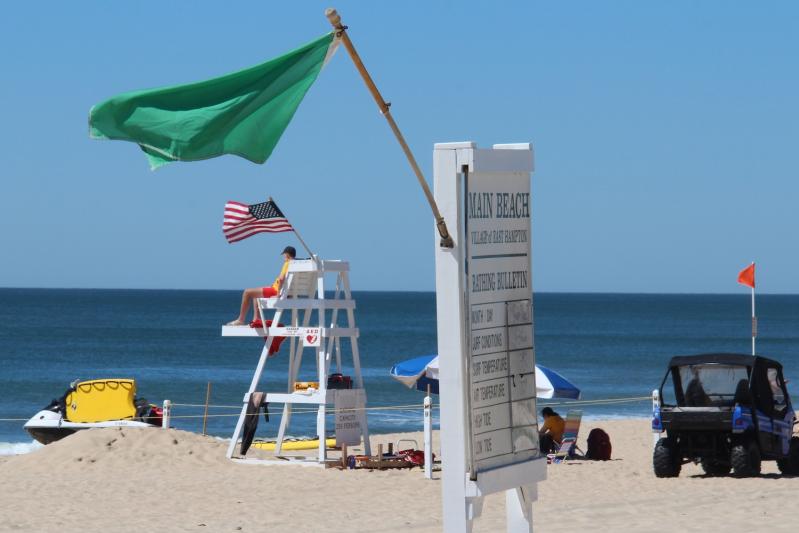 Daily parking permits for Main Beach will only be sold Monday through Thursday this summer.
Durell Godfrey
By Jamie Bufalino

In April, the village board approved a proposal to sell 500 monthly permits to park at all five village beaches in addition to the 3,100 seasonal permits and daily permits issued for Main and Two Mile Hollow Beaches. At the time, Arthur Graham and Rose Brown, trustees who had voted against the proposal, raised concerns about overselling the beaches. "Village residents are going to be irate if they can't get a parking spot," said Ms. Brown. On Thursday, Mr. Baladron said the monthly passes are nearly sold out for July and August, but halting the sale of daily permits on Fridays, Saturdays, and Sundays would allow for plenty of parking. "I'm happy to hear we dialed back the daily passes until we see how the monthlies go," Ms. Brown said. "Thank you for listening to my concerns."

Clarifying the new paid parking regulations in the Reutershan and Schenck parking lots, Mr. Larsen said those seeking to park for free for two hours do not need to log in to the ParkMobile smartphone app, and that only those parking for a third hour are required to use the app to make a payment. Village residents are allowed three hours of free parking. He also noted that the village is now offering a free shuttle between the long-term and Reutershan parking lots via Herrick Park for employees who work in the commercial district.

The board approved a proposal to combine the five-person planning and design review boards into a single, seven-person board starting on Sept. 1. Chris Minardi, the deputy mayor, said the merger would make it easier to find qualified volunteers and improve the quality of the boards, and Sandra Melendez, a trustee, Mr. Graham, a former member of the planning board, and Ms. Brown, a former member of both boards, agreed.

Because the cost of materials and labor has increased since the LaGuardia Design Group presented a proposal for the renovation of Herrick Park in 2019, the board agreed to hire Cashin Associates, an engineering firm, to provide a new estimate. Mr. Baladron said the original estimate ranged between $6 million and $8.1 million.

The board adopted a tentative budget of $24,652,457.14 for the 2021-22 fiscal year. The budget projects nearly $1 million in estimated revenue, and includes a 1.15-percent increase in the property tax rate, the lowest in five years.

Robert Gilman, one of two homeowners on Cross Road, a one-way street between Georgica and Apaquogue Roads, asked the board to approve a name change for the street to avoid confusion with several other streets that use the word "cross." He and his neighbor agreed on Privet Lane as the new name, he said. Hugh King, the historic sites manager, said the name Cross Road has no historic significance, so the board agreed to make the change.

The board approved the hiring of Vincent Gaudiello of the Raynor Group as a new consulting engineer, and it approved the East Hampton Fire Department's request to hold the annual fireworks display on Aug. 21, or, in case of rain, Aug. 22.

The board issued a proclamation honoring Dell Cullum, a wildlife rescuer, for volunteering his time to save turtles, frogs, fish, and eels during the recent dredging of Town Pond.

The Outdoor Agenda 09.17.21
A Surf Meetup for Youth
I-Tri Ride and Wine Is Saturday
END_OF_DOCUMENT_TOKEN_TO_BE_REPLACED