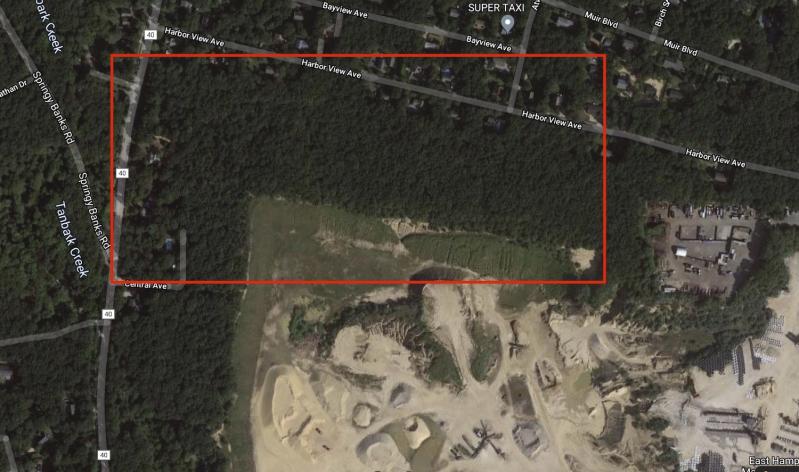 The East Hampton Town Board previously approved an affordable housing overlay designation for the property, at 286 and 290 Three Mile Harbor Road (roughly outlined in red), adjoining the Bistrian Gravel Corporation to the south and Harbor View Avenue to the north
Google Maps
By Christopher Walsh

The Town of East Hampton has won a $5.6 million award from New York State for a planned affordable housing project on a 14.2-acre parcel on Three Mile Harbor Road.

The East Hampton Town Board previously approved an affordable housing overlay designation for the property, at 286 and 290 Three Mile Harbor Road, adjoining the Bistrian Gravel Corporation to the south and Harbor View Avenue to the north. The East Hampton Housing Authority, which has an agreement to purchase the land, is partnering with Georgica Green Ventures, a private developer, in the project. The two entities previously partnered to develop the Gansett Meadow affordable housing complex in Amagansett.

The Three Mile Harbor project, now scheduled for completion in 2024, is expected to feature five townhouse-style buildings with around 50 apartments and a community building, though the number of units has not been set.

"The intention is to try to target this housing as workforce housing," Councilman Jeff Bragman said at the town board's meeting on Tuesday, "which means they change the income levels to some extent." This, he said, will see eligible applicants at both low and moderate income levels. Additional rental assistance for eight of the households is to be provided via Section 8 project-based vouchers.

Catherine Casey, the housing authority's executive director, told the town board last year that the concept for the Three Mile Harbor property would be similar to Gansett Meadow: one, two, and three-bedroom apartments at rent levels based on income.

The funding for this and other such projects is provided through the state Homes and Community Renewal's multi-finance request for proposals, a competitive process used to award federal low-income housing tax credits and subsidy financing for affordable and supportive multifamily housing developments. The $5.6 million grant to the town is part of more than $98 million awarded to build 1,054 affordable housing units across the state, which itself is part of the state's $20 billion Housing and Homelessness Plan in which 100,000 units of affordable housing and 6,000 supportive units are to be created.

"I am thrilled that the East Hampton Housing Authority is getting the support it needs to build this affordable, energy-efficient housing project at Three Mile Harbor Road," Assemblyman Fred W. Thiele said in a statement on Friday. "The availability of affordable housing opportu-nities for moderate income and working-class residents is in short supply, and the adverse impacts from this shortage of housing opportunities must be addressed."

Mr. Bragman described Georgica Green Ventures as "a highly qualified group" and its president, David Gallo, as "a very successful developer who really knows the industry. I'm happy to see it." The project is undergoing preliminary site plan review, he said.