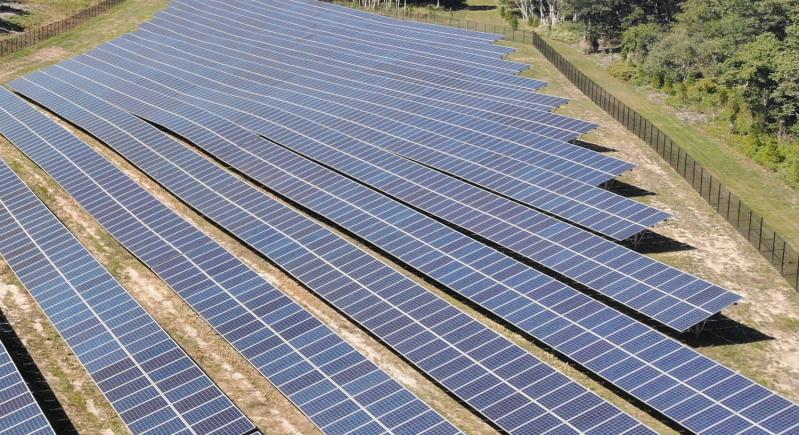 The North Sea solar array may prove to be the largest on the South Fork by a factor of two, the Accabonac Solar plant in East Hampton, which comprises 3,456 individual 320-watt solar panels across two acres.
Town of East Hampton
By Christopher Walsh

Southampton Town has issued a request for proposals for what would be Long Island's first community distributed generation solar array, a project made available through the town's community choice aggregation program.

The solar array is to be situated at the North Sea Transfer Station, a former landfill. The town announced the request last Thursday, Earth Day.

Community choice aggregation allows a local government to procure electricity and/or natural gas on behalf of its residents, businesses, and municipal accounts from a provider other than the regular utility. Options include power produced through 100-percent-renewable sources, power produced through nonrenewable sources, or a blend. A New York State program authorized by the Public Service Commission, community choice is operational in more than 50 municipalities outside of the Long Island Power Authority's service area.

The North Sea solar array may prove to be the largest on the South Fork by a factor of two. The Accabonac Solar plant in East Hampton, which comprises 3,456 individual 320-watt solar panels across two acres, is the first megawatt-scale solar power plant on the South Fork.

"What Joule did was unique and clever," said Lynn Arthur, energy chairwoman of Southampton's sustainability advisory committee. "It took the C.C.A. program and layered it over community solar."

She described community solar as an alternative path to launching a successful community choice program and a municipality achieving its energy needs from renewable sources. Absent such a program, "the developer would have to hire a company to solicit subscribers to the community solar project and manage subscriber turnover for the remainder of the term," whereas "C.C.A. does that on behalf of the developer. All the communications to the public about the program, like how it works, are also handled by the administrator, so the developer doesn't have to worry about it."

In a statement issued last Thursday, Councilman John Bouvier said that with community distributed generation, Southampton "can immediately make demonstrable progress on a C.C.A. program that profoundly benefits our residents, one project at a time."

The Southampton community solar program is funded by an 18-cents-per-kilowatt-hour rate, paid for by LIPA. There is no cost to the town or its residents.

Under LIPA's community solar tariff, or rules and regulations, 10 percent of the project's value is allocated to the town in the form of credits that can, in turn, be distributed to residents, businesses, and municipal accounts. Sixty percent of that will go to customers, Ms. Arthur said, and the remaining 40 percent can be applied to the town's utility bill. That funding is in addition to the lease payments for use of the municipal land.

The town, she said, will "accrue operational cost savings, in addition to lease revenue, which translates to a lower tax levy. Plus, we're getting renewable energy installed now, this year."

"With this project and others that the town has in its pipeline, we will set an example for other municipalities," Mr. Bouvier said in the statement, "and substantially move the needle toward a sustainable future for all that live on Long Island."