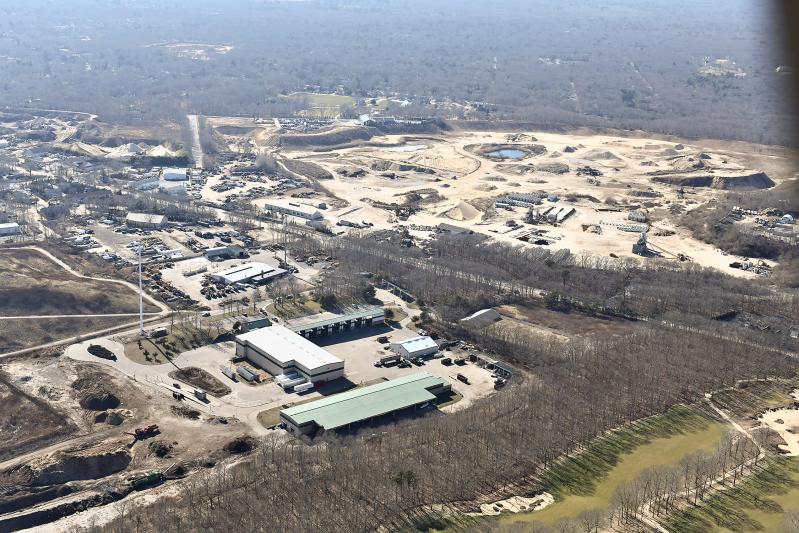 A proposed local law would give East Hampton Town greater oversight over mining operations including at the Bistrian Materials, above, and Sand Highway companies.
Doug Kuntz
By Christopher Walsh

A local law that would give East Hampton Town regulatory powers over mining, mulching, and composting operations and require the monitoring and reporting of any impacts to groundwater drew strong support from environmental advocates at a public hearing last Thursday. Representatives of a local business engaged in such operations, however, vigorously criticized the proposal.

The law would require groundwater monitoring for companies engaged in composting, mining, mine reclamation, and mulch production; work plans for the monitoring of impacts and installation of monitoring wells, and periodic reporting, on a schedule set by the town, on samples taken from such wells. The proposed legislation also includes a long list of volatile organic compounds, metals, perfluorinated chemicals, pesticides, acids, and other substances which would have to be monitored.

Callers to the virtual meeting in support of the law’s adoption spoke of the importance of protecting Long Island’s sole-source aquifer, and also cited a 2016 Suffolk County Health Department report on groundwater sampling, conducted in the vicinity of vegetative organic waste management facilities. That report, issued to the State Department of Environmental Conservation, confirmed “the prior observation of elevated metals” and “atypical elevated concentrations of radiological parameters” in groundwater downhill from such facilities.

Bob DeLuca, president of the Group for the East End, said the proposed law would provide necessary oversight of mining and materials management facilities “which have been documented to contaminate groundwater,” and would be in line with recommendations including the county’s 2016 report, which followed an extensive investigation. That investigation, he said, included more than 230 groundwater samples “from 11 sites located in the vicinity of these facilities, and they found elevated metals, manganese, cobalt, chromium, thallium, radionuclides,” or radioactive forms of elements. All, he said, were at more than twice the levels of most private wells in the county.

He also cited the health department’s 2018 report on the Sand Land mine in Noyac, which, he said, concluded that “the facility had both mining and co-located waste processing operations for many years and was responsible for ‘significant adverse impacts to groundwater,’ “ including “exceptionally high metal concentrations, manganese over 100 times the drinking water standard, iron 200 times the drinking water standard,” and more. “In fact, those impacts to groundwater were found at over 150 feet of depth into the underlying aquifer, which is located in the town aquifer protection overlay district, a state-designated special groundwater protection area, and a critical environmental area because of its importance for water quality protection.”

Mr. DeLuca’s comments were preceded by those of Paul Sharlow, an attorney, and Kris Almskog, a geologist with P.W. Grosser Consulting, which offers environmental compliance and engineering services. Both were representing Patrick Bistrian III and his companies, including the Sand Highway mining company and Bistrian Materials, which does mulching and composting.

P.W. Grosser, Mr. Sharlow said, advises controls for Mr. Bistrian’s sites “that go above and beyond controls that are currently being used at other similar, even larger facilities” in the town. His client “has never hesitated to make significant investments. As a result, Patrick’s operations have become the model D.E.C. points to when recommending facility controls at other recycling facilities on Long Island.”

But the proposed law, Mr. Sharlow continued, “is so misguided, it won’t survive legal challenge.” The town would overstep its authority, he said, as the authority to regulate mining rests with the D.E.C. The state allows Long Island towns to require groundwater monitoring at mine sites, he said, yet the town’s proposed law “attempts to take that very limited authority that the state granted and apply it to mulching facilities, which are also permitted and regulated by the state D.E.C. The state regulates both mining and recycling facilities because they have the expertise to do so.”

“There has been hysteria in the past few years about permitted mine sites and the impact they could have on groundwater,” Mr. Almskog told the board, adding that “permanent mine sites are “very different from illegal mining and dumping facilities.” Sand Highway has “an extensive groundwater monitoring network,” he said, and all the Bistrian sites are heavily regulated and permitted by the D.E.C., adhere to numerous conditions, and see “frequent unannounced visits by D.E.C., inspections, audits.” The D.E.C., he added, points to Sand Highway “as a role model for other facilities on Long Island.”

Mr. DeLuca, and other supporters of the law, pushed back on those arguments. “Think about the idea that somehow D.E.C. is taking care of all of this,” he said. “They are not. They don’t have the people, they are not doing inspections to the level of detail sufficient to protect groundwater, and the result is groundwater contamination.” The agency “is not up to the challenge that’s presented to them by the reality that we live in.”

Adrienne Esposito, executive director of Citizens Campaign for the Environment, was more direct. “Those that tell you that the D.E.C. plays a rigorous regulatory role are, frankly, hallucinating,” she said. “The D.E.C.’s regulatory role when it comes to sandmining is gravely anemic.” Every inspection report from almost two dozen sand mines on Long Island, she said, “is perfect, according to the D.E.C. Could you imagine that? An industry as large and vast as the sand mining industry on Long Island always receives perfect reports from the regulatory agency? That’s incredible and difficult to believe, and in fact it’s not true.”

Frank Riina, a Springs resident, also supported the proposed law. “Throughout Long Island, there are countless examples of groundwater contamination that resulted from adverse surface activities, including those relating to sand mining, mulching, and composting,” he said. “Sandmining excavation removes the natural filtering qualities offered by vegetation and soil, leaving in its wake an open scar that too frequently reaches groundwater and exposes it to nearby contaminants.” As such, he said, “it becomes imperative to regularly test groundwater beneath these industries to determine if a public health crisis is