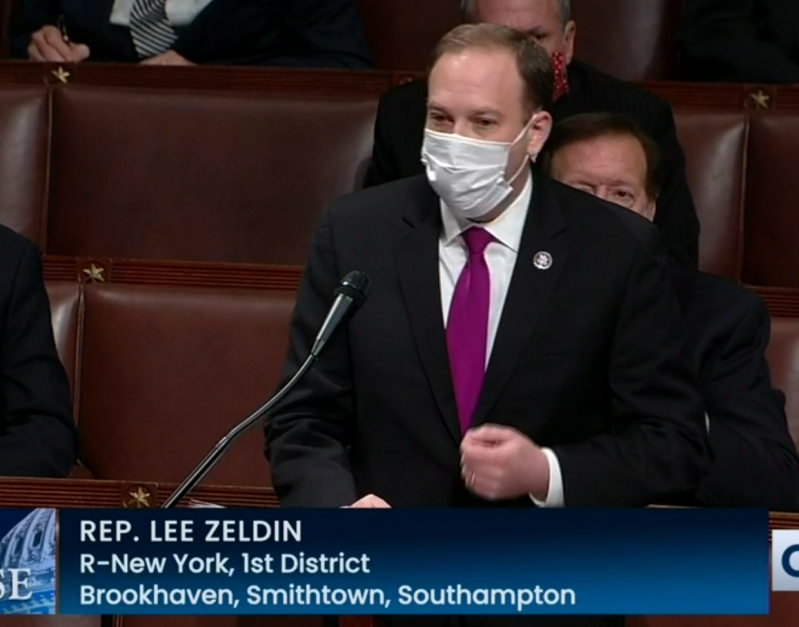 Representative Lee Zeldin speaking on the House floor after the Jan. 6 insurectionists attack on the Capitol.
By Christopher Walsh

Representative Lee Zeldin, one of President Trump's most loyal allies, is facing calls for his resignation in the wake of the Jan. 6 armed attack on the United States Capitol, an act of domestic terrorism intended to overturn the certification of electoral votes that was underway.

An activist group called Progressive East End Reformers was among those taking part in a protest outside Mr. Zeldin's office in Patchogue on Monday. The New York State Democratic Committee and the activist group Suffolk Progressives are circulating petitions, the former calling for Mr. Zeldin's immediate resignation, the latter calling for the Suffolk County Legislature to condemn Mr. Zeldin's attempt "to subvert democracy and overturn a free and fair election."

"Coups have consequences," reads an email from Progressive East End Reformers. "Zeldin has tethered himself to Trump from the start. Now comes the day of reckoning for his radical allegiance." The group called him "a radical extremist, a traitor, a disgrace."

In the weeks since Mr. Trump lost his re-election bid to President-elect Joseph Biden, Mr. Zeldin has followed the president's lead in insisting that the election was illegitimate because state officials had changed election rules to enable voting during the coronavirus pandemic. Last month, he supported a failed Supreme Court challenge to the certified election results from four states won by Mr. Biden and Vice President-elect Kamala Harris. Those moves followed years of defending the president, including throughout his 2019 impeachment in the House of Representatives and subsequent acquittal in the Senate. (Yesterday, Mr. Trump became the first president in history to be impeached twice.)

The Jan. 6 insurrection, which followed a rally at which Mr. Trump and associates urged supporters to march to the Capitol and "fight like hell," left five people dead including a Capitol police officer. A second Capitol Police officer subsequently died by apparent suicide, and another may lose an eye after being gouged with a flagpole. A joint session of the House and Senate, during which the certification of the electoral count is usually a formality, was abruptly halted and lawmakers rushed into hiding as the nearly all-white mob ransacked the building, looting and destroying property, some apparently seeking to assassinate Vice President Pence and Democratic Party leaders.

When the proceedings resumed about six hours later, several Republican senators had abandoned their previous pledges to support their House colleagues' challenges to vote certifications, ending hopes of overturning the election result. The mood shifted dramatically, with some House Republicans expressing a sudden spirit of bipartisanship.

Not so Mr. Zeldin. The congressman, who often touts his rank of 12th most bipartisan member of the House, according to the Lugar Center and McCourt School of Public Policy at Georgetown University, resumed his effort to challenge Arizona's electoral votes for Mr. Biden and Ms. Harris. "This debate is necessary, because rogue election officials circumvented state election laws," he said. "They made massive changes to how their state's election would be run. These acts, among other issues, were unlawful and unconstitutional."

It wasn't until last Thursday, after the early-morning certification of the vote that finally settled the 2020 election, that Mr. Zeldin shifted his tone with a late-night statement in which he finally acknowledged that Mr. Biden and Ms. Harris would be inaugurated on Jan. 20. "Right now, I am not going to dwell on any doubt, but to recommit to working towards a vigorous defense of lady liberty at all costs, and the pursuit of unity whenever possible," he said. "For this moment, let's take one collective deep breath, recharge and renew our spirit for whatever lies ahead. We are all Americans."

Mr. Zeldin was among 147 Republicans in the House and Senate who voted against certification of the election results.

In a statement provided to The Star on Monday, Mr. Zeldin conflated his Jan. 6 objection to Arizona's vote certification with past instances of Democrats' objections. "Following every Republican presidential win over the last generation, Democrats have objected in Congress on January 6th as part of the same Constitutional process. It's an incredible double standard that if Republicans object as well on the same date in the same place as part of the same process then that makes them all seditious traitors. Those who committed acts of violence in the Capitol must be held accountable. Those eager to use Wednesday to settle political scores, though, are only dividing our country more."

His efforts drew a harsh rebuke from former Representative Tim Bishop, whom Mr. Zeldin defeated in 2014. "What happened was an armed insurrection fomented by the President of the United States," Mr. Bishop said last Thursday, "and the anger that was demonstrated by those rioters was anger rooted in a lie, the lie being that the president's re-election had been stolen from him, that he had won in a landslide, we just need to 'stop the steal,' and Mike Pence just needs to reject the electors and voila, we'd have four more years. That's the lie, and the lie has been repeated over and over and over and over again since the seventh of November," when the Associated Press and major networks concluded that Mr. Trump had lost the election.

"And by objecting to the electors from Arizona and Pennsylvania, any member of Congress, House or Senate, that objected to accepting those electors was perpetuating the lie," Mr. Bishop said. "They were giving credence to the lie. So even after all of the destruction, even after the death, even after seeing what happens when angry people are encouraged to act out by the president of the United States -- again, based on a lie -- members of Congress, including Lee Zeldin, validated that posture on the part of the president. They said to them, in the case of these two states, 'the election was in fact stolen.' That, to me, is an outrage. If there was any evidence -- any evidence -- we would have seen it by now. . . . The reason we haven't seen it is because it simply doesn't exist."

Nancy Goroff, who unsuccessfully challenged Mr. Zeldin in the November election, said that she was "disturbed by the fundamental dishonesty" of Mr. Zeldin's speech objecting to the Arizona vote. "He is very careful to say things which in some very literal ways, very narrowly defined, may be true, but are so distorted with cases that are completely misleading, the overall effect is completely dishonest."

Mr. Zeldin "owns responsibility for this, like the president does, because they have purposely misled people," Ms. Goroff said. "Their argument, Zeldin and his Republican colleagues, for why they needed to file these objections was because there are voters who don't trust the results. . . . The correct way to deal with the fact that they don't trust the results is to tell them the truth, not to pretend that there's validity to these specious arguments. . . . The results are as trustworthy as any election we've had, but the people have been misled by Zeldin and his colleagues, and they own responsibility for this, including what happened on Wednesday," Ms. Goroff said. "This district deserves much better."

"To the extent that Trumpism has a coherent policy basis, and I'm not entirely sure it does," it is populism, said Mr. Bishop. "What is populism? At its core it's an aversion to elitism, a rejection of elitism. So tell me, what could possibly be more elitist than a collection of people in Washington telling all of the people of Arizona and Pennsylvania that 'We know better than you. Yes, you cast votes, but they were cast erroneously. We know who really won the state. We know how the election should have gone.' That's explicitly what is being said when you reject the electors." Well over 100 representatives and a handful of senators "did that yesterday," he said on Friday. "Lee Zeldin was one of those members, and I find that to be thoroughly, thoroughly disturbing."

"One of the criticisms was that they extended the deadline for registration to vote in Arizona," Ms. Goroff said. "How that's counter to democracy, I'm not sure. . . . I find it really disturbing that we have a congressional representative who, even after the horror of the day, of having a mob overrun the Capitol, would be eager to be so dishonest in defense of an indefensible president."

"I don't know what he stands for," she said of Mr. Zeldin, "because he certainly doesn't stand for law and order, for democracy. He stands for the opportunity to get up and make a speech on the House floor, and he's willing to be dishonest to do it."

"My thoughts about Zeldin and any of the challengers to the fair and free 2020 election," said Cate Rogers, chairwoman of the East Hampton Democratic Committee, "is one of the worst things about their act is that they know better. They know they're lying -- they're lawyers." Mr. Zeldin "knows how diligent and nonpartisan boards of election are because he's experienced it firsthand" as a candidate, she said. "Above the folks being tricked into believing this garbage, I find Mr. Zeldin on a higher level of culpability. He is well aware it's a lie."

Ms. Rogers said her mood turned from "being absolutely thrilled with the voter turnout and the result in Georgia," where two Democratic candidates unseated two incumbent Republican senators in Tuesday's runoff elections, "and just joy for our democratic process, to revulsion, watching the insurrection and mob rule. My heart breaks for the policeman who lost his life. I don't know how you can claim to be pro-police," she said of Mr. Zeldin, "and then back this."

Mr. Zeldin and his colleagues must choose a side, Ms. Rogers said, "to uphold the Constitution and our democracy, or turn us into an autocracy." Mr. Trump's allies, including Mr. Zeldin and Senators Ted Cruz and Josh Hawley, "educated men who know better, are carrying these lies that dupe the people who are believing it. It amplifies their belief. They're worse than Trump. And he's despicable."

Assemblyman Fred Thiele also criticized Mr. Zeldin. "Joe Biden won," he said in a statement. "Yet, for two months, President Trump, some U.S. Senators, and some members of Congress, including our own, have lied to their supporters by telling them, without any credible evidence, that the election was stolen. They are complicit in the insurrection that occurred last week. . . . Those who attempted to overturn a free and fair election will be judged harshly."

"This disgraceful attack on law enforcement and on our democracy is the responsibility of the mob and the elected leaders who have been lying to them for so long," Suffolk County Executive Steve Bellone said in a statement on Friday.

Manny Vilar, chairman of the East Hampton Town Republican Committee, defended the challenge to the election results. In a statement on Jan. 6, he said that "After four years of investigation and vicious persecution of fabricated disproven allegations of President Trump the American people deserve and should have a thorough investigation of the many reported irregularities and possible criminal activities in several states."

"We cannot allow several bad actors in today's protest that may or may not have been part of the protest detract from the need to thoroughly investigate systemic voter fraud," he said. "Never in our lifetimes did we ever imagine we would be seeing what is playing out in our nation's Capital today."