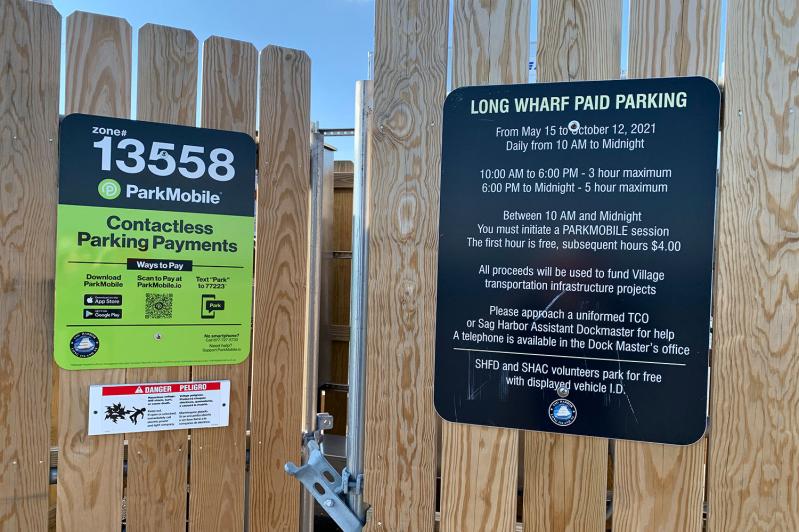 Following the introduction of paid parking this summer at Long Wharf in Sag Harbor, the Sag Harbor Village Board presented an elaborate report on the somewhat controversial initiative at Tuesday's board meeting.

Paid parking, in this case an automated process of finding and paying for a parking spot through a free mobile app called ParkMobile, began at Long Wharf in May and concluded in October. According to Tuesday's report, the initiative resulted in a revenue of $64,616.95. There were 12,589 transactions recorded, and after various adjustments, the amount netted by the village was $57,531.49.

Funds raised from paid parking are earmarked for "transportation infrastructure projects including the creation and repair of sidewalks," the report stated.

When the initiative was introduced at the start of the summer season, there were many disgruntled Sag Harbor residents and visitors, who felt dismayed that yet another surcharge had been added to the already high cost of living on the East End. The process was also felt to be confusing and cumbersome. After creating an account in the ParkMobile app, users were required to add their vehicle's license plate number and a payment method. The first hour was free -- but a 30-cent transaction fee for each session was paid to ParkMobile -- and additional hours cost $4 per hour. The Long Wharf lot offered several free 30-minute spaces.

Tuesday's report seemed to echo the pre-summer grumbling of residents. It included findings from a poll conducted by the Sag Harbor Chamber of Commerce on the effects of paid parking on local businesses, which the board pointed out offered only a small sample of 22 individuals.

Perhaps the most telling number of the poll was that 79 percent reported confusion among users on how to engage with the process or navigate the mobile app. (A comment under this finding reads, "Almost all the negative comments said that Wi-Fi was an issue and the app didn't work well or was cumbersome, especially for the old folks.")

Survey participants offered feedback about the initiative. These were included in the report and they ran the gamut from, "Alienates locals and visitors alike," to "Seems like a great system," to "What are seniors or anyone without a cellphone supposed to do? Keep it simple!"

In the report, ZIP codes for approximately 40 percent of the 12,589 recorded transactions showed that, unsurprisingly, the majority of drivers were from New York -- a total of 4,070. This was followed by a sharp drop to 575 vehicles from New Jersey, and further diminishing numbers from Connecticut, Pennsylvania, Maryland, and other states in the Northeast and the Mid-Atlantic. In the ZIP code tally, only 77 transactions of the 12,589 originated from a Sag Harbor address, which resulted in $1,801 of the total revenue. The report stated that, "There were many $0 transactions from within the 11963 area code indicating that many local people took advantage of the free first hour, but did not stay longer."

In the ongoing climate crisis debate, it is regularly argued that parking is one of the things that has a powerful impact on people's decisions on whether to drive or not. Free or underpriced street parking, it has been found, keeps people driving, rather than walking or biking. Here on the East End, the more people driving during the summer months, means more traffic, congestion, and pollution. With parking at a premium already, the paid system was seen in part as a way to reduce demand while also earning money for the village.

Efforts to help the East End shift away from driving and toward shared and active modes of transport also require better public transport, as well as safer walking and biking paths.

A decision as to whether paid parking will return to Long Wharf in 2022 will be made following further review in February.