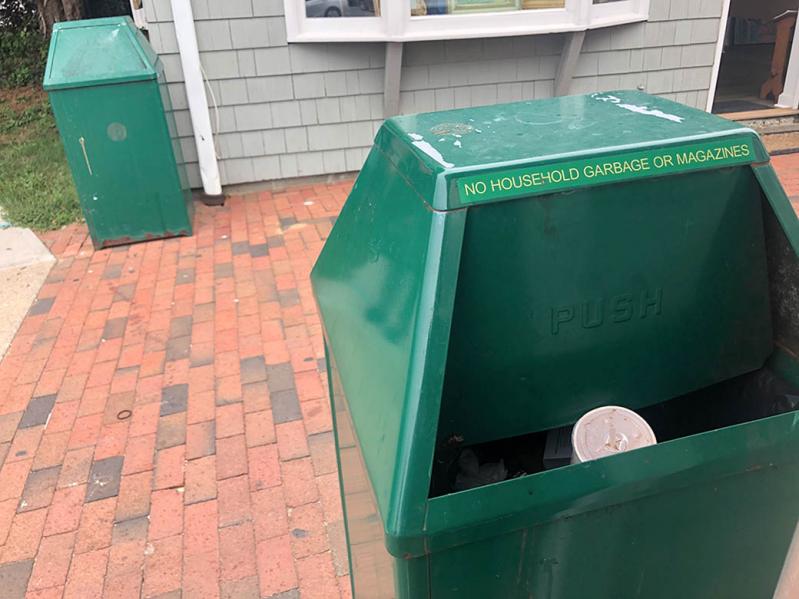 Officials in East Hampton Village want to get tough on trash can abusers.
Christine Sampson
By Jamie Bufalino

The East Hampton Village Board is pondering new legislation that would increase the number of littering offenses, and make it easier to prosecute people who put their personal garbage into public receptacles.

Although the text of the law was not available, and the trustees did not discuss the matter when they met on Friday, Becky Molinaro Hansen, the village administrator, explained the proposed law, which would amend the "garbage and rubbish" code.

The law would make it clear, she said, that when a receptacle is full, people must find another bin for their garbage, rather than piling it on top of the full one or leaving it on the ground next to one that is already overflowing. The law would also make it easier to prosecute anyone who disposes of their household garbage in public receptacles.

A public hearing on the amendment will be held on Aug. 21.

On Friday, the board discussed eliminating the softball field from Herrick Park, because the East Hampton School District, which provides funds for the portions of the park that it uses for its middle school sports, plans to build its own softball field, on the high school campus. A Herrick Park renovation plan approved by the board in May includes the field, so "the question is whether to keep the field or have it removed," said Mayor Richard Lawler, who noted that the Artists and Writers charity softball game is held there.

Arthur Graham, a trustee, suggested the board pose that question to the public. "Let's take it to the community, and if there isn't any interest, take it out, and make the baseball field dual use," he said.

Rose Brown agreed that the public should weigh in, and wondered, "What would we get, if we didn't have it?"

The board decided to ask the LaGuardia Design Group, the landscaping architecture firm that drew up the renovation plan, to offer alternative ways to use the space.

The board also approved an amendment to the East Hampton Village Ambulance Association bylaws that will eliminate a requirement that members live in the district. Also okayed was a temporary adjustment to a pension-like incentive program for members of the Ambulance Association and Fire Department. To qualify for the benefit, members must take part in a required annual number of response calls, training courses, meetings, and other activities. Because of the pandemic, many members, for safety reasons, have not been able to meet those requirements, so the state is now allowing municipalities to lower the threshold of qualification.

The board granted Robert Rattenni, the owner of the commercial building at 55 Main Street, a sanitary easement to install an advanced nitrogen-reducing septic system under the Reutershan parking lot.

During a discussion about the Village Police Department, Mr. Graham suggested that the village pick up the tab for officers who enroll in Spanish-language classes, in an effort to improve communications with Spanish-speaking members of the community.

Mayor Lawler pointed out that there are several people who speak Spanish in the dispatch department, and said the village was discussing the possibility of having advocates on hand for Spanish speakers.