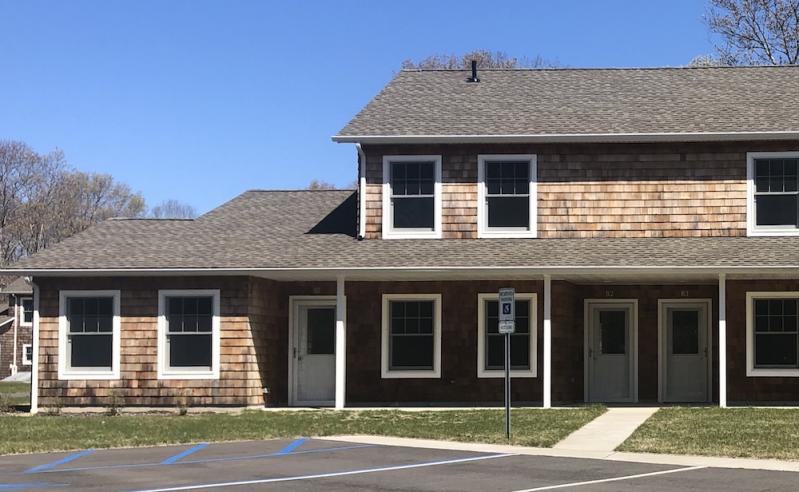 The most recent test of the air quality at the Manor House complex, a new affordable housing development on Accabonac Road in East Hampton, once again found elevated levels of volatile organic compounds in the units' basements, according to Tom Ruhle, director of the town's office of housing and community development.

The compromised air quality, which the town has said is caused by off-gassing of the basements' foam insulation or fireproof paint, was discovered at the 12-unit condominium complex last fall.

Since then, an environmental services firm has conducted three rounds of tests on the town's behalf, all of which detected volatile organic compounds that exceed the federal Environmental Protection Agency's regional screening levels. The building's contractor, JNS Development of Wading River, commissioned two other tests that found the V.O.C.s to be at a more acceptable level; Mr. Ruhle, however, said those tests followed a different set of standards.

On July 2, the town board voted to retain Rigano L.L.C., a Melville law firm, to provide legal and consulting advice to find a solution to the problem. In mid-July, the FPM Group, an engineering and environmental science company hired by the law firm, conducted its own air quality tests.

The FPM Group tested all the units "from the basement upwards" and "inside and outside," said Mr. Ruhle. The outside tests, he said, showed that there is not an external cause of the elevated V.O.C. levels.

FPM thinks the problem may be with the units' closed heating and air-conditioning systems, which circulate indoor air only, according to Mr. Ruhle. Such closed systems work on the assumption that homeowners will allow in fresh air by opening doors and windows, he said, but the Manor House units have been unoccupied thus far.

To test the theory, one of the two-story, two-bedroom units will have its HVAC system modified to pull in outside air. To get an accurate reading of V.O.C. levels, the new system will have to run for about four to six weeks before another air quality test can be taken, Mr. Ruhle said. If the V.O.C. levels were found to be reduced, then all the units would undergo the same modifications.

"Those modifications are not cheap," he said, and discussions are underway about who will pay for them. "From the town's point of view, we would like the builder to do it. Our other option is to do it ourselves and then sue them, but we don't want to do that."

If the V.O.C. levels are still elevated even after the HVAC modification, the insulation in the units may have to be removed or at least encapsulated, Mr. Ruhle said.

The first occupants of the development, which is the first recent affordable ownership opportunity provided by the town, were expected to move in before the end of 2019. The one, two, and three-bedroom units were offered, via a lottery, to qualified residents who are not homeowners.

"That means we're all tenants at the mercy of landlords," said Lauren Maldonado, an administrator at the Montauk Playhouse Community Center Foundation who has been waiting to move into one of the three-bedroom units with her husband and daughter. Now, she said, "our future is so uncertain. Do I have to get prepared to move, find day care in East Hampton and commute to Montauk?"

While waiting for the complex to open, the Maldonados have been living in a property owned by a family member and paying rent that is well below market rate, she said. "We didn't think we'd be here this long. It's stressful."

She and her husband have now gone through a mortgage application process twice, but have not been able to finalize the purchase because of the ongoing delays. She has learned most of the details about the current status of the project solely from reading newspaper articles, she said.

"To be in the dark about all of this is super-disappointing. I would love to be acknowledged a little more," Ms. Maldonado said. "We're not being told about the solutions." When the family first heard about the air quality problems, she recalled, she didn't think it was that big a deal. "I thought, let's get some air in there, air it out, and move in. But now, because I have a 2-year-old daughter, I would want to see the air tests prove that this is at a livable level."

A meeting at which the future owners will be given an update on the testing is in the works, said Mr. Ruhle, but the timing is still up in the air. Rather than holding it before the HVAC modifications are done, it likely makes more sense, he said, to have it afterward, when new test results are available.

A timeline for the modifications has not yet been set, but Mr. Ruhle said preparations are underway.

As the delay has dragged on, the town has been keeping tabs on the living situations of the units' future owners. "None of it is good," he said of the wait. "But I don't know that there's anyone, except for one person, who is going to be imminently homeless, and the town is trying to help that person." The town, he said, "wants to get buyers in there as soon as possible."