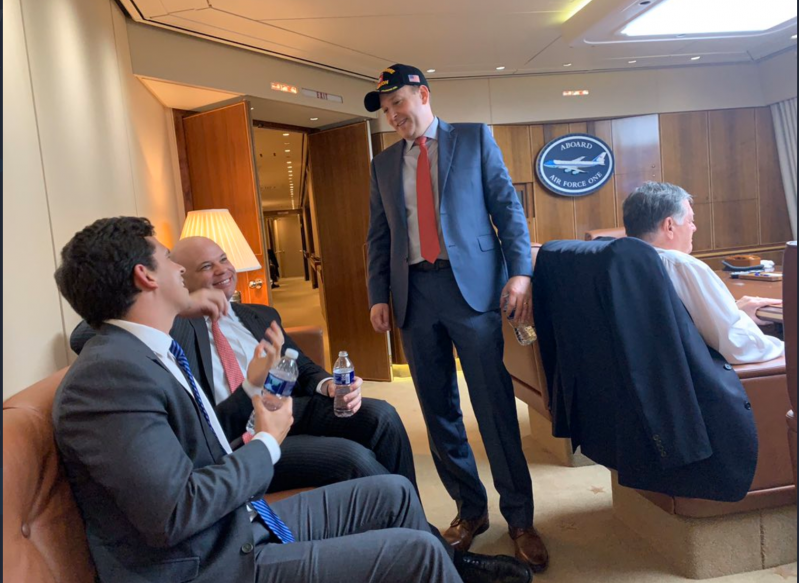 Representative Lee Zeldin, standing, on board Air Force One on the way back from the Tulsa, Okla. rally on Saturday
Twitter
By Christopher Walsh

Representative Lee Zeldin of New York's First Congressional District, who is among President Trump's most devoted supporters in Congress, accompanied the president to his rally in Tulsa, Okla., on Saturday, drawing criticism from his Democratic challengers for not wearing a face covering at the rally.

As the coronavirus pandemic subsides in Mr. Zeldin's district after the deaths of nearly 2,000 Suffolk County residents, it surges in Oklahoma and many other states. On Tuesday, the Oklahoma State Health Department reported 11,028 confirmed cases of Covid-19 infection, with a 2.7-percent jump in 24 hours. Tulsa health officials had pleaded with Mr. Trump's campaign to cancel the rally or consider holding it outdoors, fearing it would become a "super-spreader" event for the virus.

An estimated 6,200 supporters attended the rally at the Bank of Oklahoma Center, which holds 19,200. A scheduled overflow rally was canceled when only a few dozen attended.

Mr. Zeldin took to Twitter on Saturday evening, stating in one message that "The passion and love of country in the house here in Oklahoma right now is incredible. Great energy. There are bad forces in America looking to tear everything down, but they won't win this war they've declared. This crowd is bleeding red, white & blue. It's awesome."

He did not identify the "bad forces" he was referring to, but on Tuesday posted a message on Twitter calling to "Arrest the mob rioters illegally toppling statues all across America!" In the wake of the recent murder of African-Americans at the hands of police officers, nationwide protests against police brutality have extended to a movement to topple statues of slaveholders and Confederate generals.

After the rally, the congressman wrote on Twitter of the "Great Day in Tulsa with President Trump, his amazing team, and patriotic supporters. Heading back to DC now with the President after an outstanding #TulsaTrumpRally speech!" He included a photo of himself on Air Force One. ". . . and a pretty awesome mobile work office for the trip back!" he wrote.

Katie Vincentz, a spokeswoman for Mr. Zeldin, told The Star yesterday that "throughout his entire visit to Tulsa, Congressman Zeldin was socially distanced from rally attendees who were not part of the delegation that traveled from Washington. He wore a mask into the arena and only removed it after sitting. All other people around him in his section were tested beforehand and all tested negative, including Congressman Zeldin."

The candidates vying for the Democratic Party's nomination to challenge Mr. Zeldin condemned the congressman's appearance at the rally. Although the Democratic primary election was on Tuesday, the nominee will not be known until absentee ballots have been counted.

Perry Gershon, Mr. Zeldin's Democratic opponent in 2018 who lost by four percentage points, said in an email to supporters that "at a time when we're trying to prevent the spread of the coronavirus, Lee Zeldin is promoting a massive super-spreader event that will surely make people sick." In a subsequent email, Mr. Gershon, who lives in East Hampton, spoke of seeing television coverage of Mr. Zeldin, without a face covering, in the crowd at the Bank of Oklahoma Center. "Now, I hope he manages to dodge getting sick," Mr. Gershon wrote. "I wouldn't wish the virus on anyone. But this is an EPIC FAIL of leadership."

Nancy Goroff, who is on leave from her position as chairwoman of the chemistry department at Stony Brook University, wrote on Twitter on Saturday that she was "not surprised to see Congressman Lee Zeldin travel to Oklahoma to pander to the president & endanger people's lives by joining this rally. Usually, he ignores NY-01 constituents because he's too busy on Fox News trying to stroke the President's ego."

Suffolk County Legislator Bridget Fleming, another candidate for the nomination to challenge Mr. Zeldin, wrote on Twitter on Sunday that Mr. Zeldin was at the Tulsa rally "surrounded by thousands of people, without a mask amid a coronavirus pandemic. The lengths he'll go for attention from the President speaks volumes about his priorities."