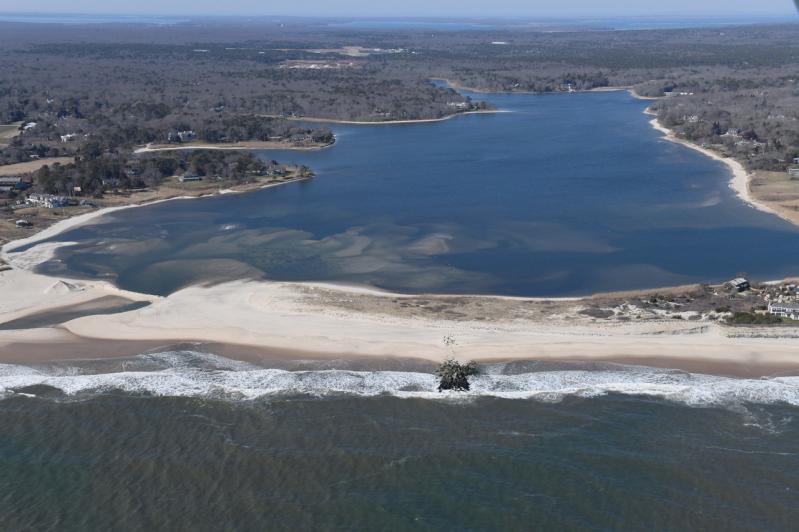 The East Hampton Town Trustees expect that a recent dredging of Georgica Pond will improve the water's flow when it is opened to the Atlantic Ocean.
Doug Kuntz

Yearly maintenance dredging at Georgica Pond — up to 15,000 cubic yards of sand — is nearing completion. The dredging, said Sara Davison, executive director of the Friends of Georgica Pond Foundation, will “undo some of Mother Nature’s overwash — the surf is constantly pounding the beach, depositing sand, blowing sand. A lot ends up in the pond, and that makes the pond much shallower and builds up an overwash.” The sand has also impeded the East Hampton Town Trustees’ traditional biannual letting-out of the pond.

This year’s dredging, the second in a planned 10-year project, will finally resolve a lingering condition, said Francis Bock, the trustee clerk. Previously, the trustees had been excavating sand from the same location every year, he said. “When the pond would open on its own during a storm, it would tend to open on the west end of it and then start eat- ing away at the dune along the Georgica Association,” he said, “and threaten the bath house they have.”

Excavated sand formed a makeshift berm separating the pond from the beach last month, alongside a larger pyramid of sand. The Georgica Association, a private enclave of houses, has agreed with the trustees to buy some of the excavated sand to stabilize its beach.

When their old excavation permit expired, Mr. Bock said, “We decided we would reconfigure that whole end so there would be less risk of it opening there . . . the whole idea is to get as much of that sandbar out of there as possible, because it’s impeding any flow.”

Shallow depths, coupled with rising water temperatures due to climate change, also promote the growth of harmful algal blooms, Ms. Davison said. Blooms of cyanobacteria, or toxic blue-green algae, have appeared in the pond every summer since 2012. “There’s a reason it’s called maintenance dredging,” she said, “because it’s trying to maintain a status quo, which isn’t natural in nature. Nature’s always changing, but if we want a certain condition . . . we do have to do maintenance to maintain an ecosystem.”

Ken Rousell Inc. of Montauk is the contractor for the project. “They did a very good job,” Ms. Davison said of the company. The Friends of Georgica Pond Foundation “is pleased. They got it done early, quickly, and professionally. We got the desired result.”

The trustees are expected to open the pond to the ocean later this month, before the return of piping plovers and least terns, federally protected birds that nest along the shoreline.