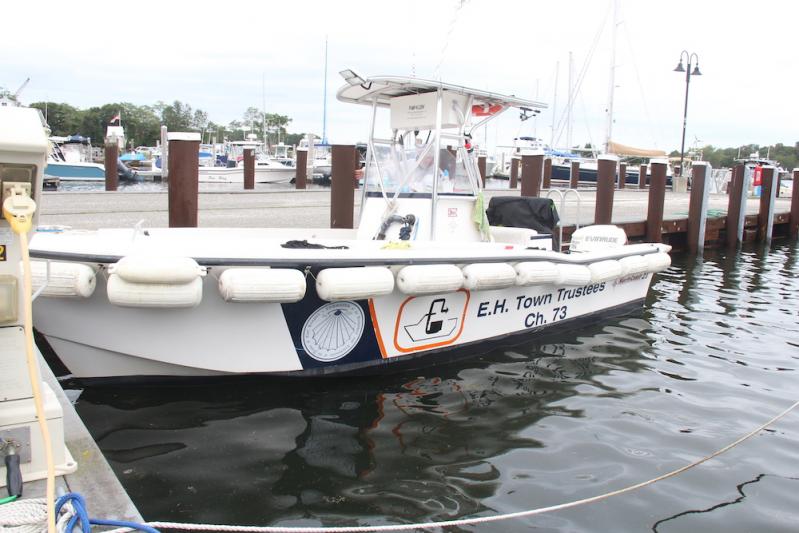 The East Hampton Town Trustees voted unanimously to authorize the purchase of a third pumpout boat at their meeting on Friday. The move followed an especially busy summer for the existing boats the trustees operate in Lake Montauk and Three Mile Harbor and what one trustee described last month as "an effluent crisis" in Montauk on Labor Day weekend.

The discharge of sewage, treated or untreated, is prohibited in trustee waters. The entire Peconic Estuary is a designated no-discharge zone, and the discharging of raw sewage directly into waters within three miles of land is illegal under federal law.

Marine Boat Builders of Warwick, R.I., an authorized manufacturer of the New York Environmental Facilities Corporation's Clean Vessel Assistance Program, will build the trustees' new pumpout boat. The cost of the 23-foot vessel and its trailer, $108,570, will be offset by a $60,000 grant from the Environmental Facilities Corporation through the Clean Vessel Assistance Program.

John Aldred of the trustees told his colleagues on Friday that the town's water quality technical advisory committee would recommend to the town board that the balance be paid with community preservation fund money, a portion of which can be allocated to water quality improvement projects.

The coronavirus pandemic is believed to be responsible for a surge in boating activity this year, as well as boaters' eschewing of showers and other public facilities at marinas in favor of those on board.

An existing pumpout boat in need of repair should be delivered to Marine Boat Builders, the trustees agreed. A refurbished boat could serve as a backup or as a third active boat. "We have found ourselves in situations this summer where that boat could have been used as an accessory," Jim Grimes said on Friday.

The trustees have discussed a third boat for the last few years, with the need most acute on holiday weekends and during events like the annual Blessing of the Fleet.

The trustees can apply for another state grant and C.P.F. money to finance the refurbishment, Mr. Aldred said. "I think we should move ahead, as quickly as possible, moving that boat to Rhode Island so we can get a quote and get that reimbursement paperwork started."

Trees, Wreaths for Sale in Amagansett
Holiday Cheer Is Coming to Sag Harbor
Even More Thanksgiving Options From the Pike and Old Stove
END_OF_DOCUMENT_TOKEN_TO_BE_REPLACED