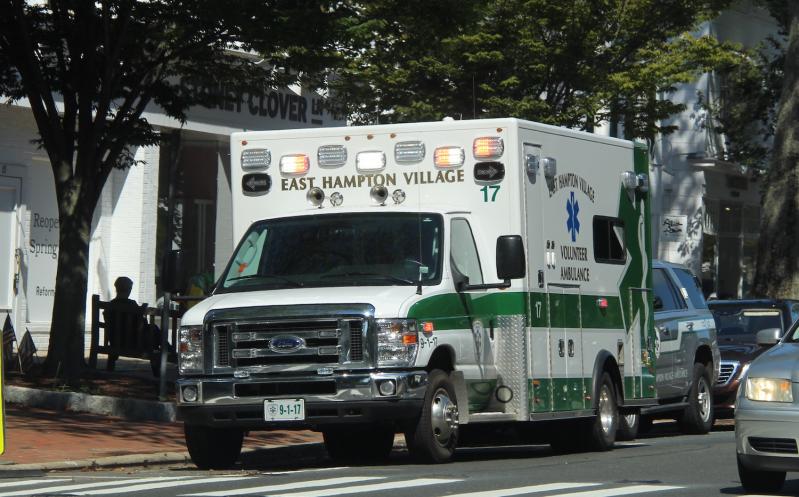 "My responsibility is to provide a service, but I have an agency that’s resisting doing things to make it better, resisting paid help," said Mayor Jerry Larsen. "If we can’t get them to work with us, we have to figure out another way to run the ambulance.”
Durell Godfrey Photos
By Christopher Gangemi

The East Hampton Village Ambulance Association has hired a lawyer to fight what it says was an illegal transfer of its ambulance service certificate from the association to the village government without its agreement, notification, or use of administrative protocols required by state law. The transfer could lead to billing for ambulance services.

New York State requires the certificate for an ambulance to operate. The ambulance service certificate (A.S.C.) delineates the territory where the ambulance operates, helps ensure coverage for all areas, and reduces overlap between jurisdictions. Every two years, it needs to be renewed with the state.

The East Hampton Village Ambulance Association territory includes the village, Northwest Woods, and surrounding areas. According to its website, the association has 44 members, operates three ambulances, and responds to approximately 1,300 calls a year.

The association “has to be willing to transfer their authority,” Philip Cammann, the Suffolk County Regional Emergency Medical Services Council (REMSCO) representative for the East End Ambulance Coalition, said by phone. “Unless the E.H.V.A.A. abandons their responsibilities, the municipality can’t just come in and take the A.S.C. away. It has to go through REMSCO. There’s a process. The process is, the agency or municipality that is taking over has to apply and whoever has the current A.S.C. has to relinquish it,” he said.

Mr. Cammann stepped down as chairman of REMSCO on Dec. 31. “There was not any rumor or paperwork that came across my desk regarding East Hampton,” he said.

“It’s pretty clear from the documents in the state’s file that this ambulance company has been the registrant and the certified ambulance provider going way back,” Tim Glynn, the lawyer for the ambulance association, said by phone. “The vehicles they identify carry a fair inference of ancient history. We intend to write to the state and challenge this action. These guys don’t run an ambulance company.”

The East Hampton Village Ambulance Association was founded in 1975 when Vince Grabowski first registered with the state. Two vehicles were covered by that application: a 1965 International Scout and a 1972 Cadillac. By 1977, the Cadillac was replaced by a real ambulance. Mr. Grabowski’s daughter, Ann, was the chief of the association until November.

The new chief, Mary Mott, was sworn in at the last village board meeting, on Dec. 16, but could not be reached for comment.

So how did the village switch the certificate without going through the process Mr. Cammann described above? It hired a lawyer, Brad Pinsky, who wrote to Joseph Farrell, a unit chief with the New York State Department of Health’s Bureau of Emergency Medical Services and Trauma Systems.

“The mayor has told me that he believes that the present A.S.C. was applied for and issued to the village, but it is in the name of the ambulance association,” Mr. Pinsky wrote in a July 26 email to Mr. Farrell. The mayor “believes that the association did not exist when the A.S.C. was granted. We are questioning if you could determine who the certificate was originally issued to and if it was ever transferred. If it is in the name of the village and was not transferred from the village, we are asking that the name be corrected to ‘Village of East Hampton.’ “

By Sept. 15, the ambulance service certificate, which was last renewed in 2021 to the East Hampton Village Ambulance Association, was amended and put in the name of the Village of East Hampton.

He disagreed that the village needed to go through the REMSCO process. “We asked the state to look at it and it wasn’t their license. It was accidentally put in their name in the past. The state researched it. My understanding is that it was never the association’s license so not theirs to relinquish. The state agreed with us and amended the certificate.”

On the Suffolk REMSCO website it says it “carries out its responsibilities pursuant to Article 30 of the New York State Public Health Law,” and “By statute, the council is charged with several responsibilities including coordination of emergency medical services in the Suffolk Region.” In other words, it is in charge of ambulance service certificates.

The detail of who holds the certificate is important. A law signed by Gov. Kathy Hochul in July allows fire districts to bill for ambulance services, potentially recovering some of their costs from insurance companies. Since the passage of the law, REMSCO has transferred multiple ambulance service certificates from fire departments to the districts so that they could take advantage of the new law.

For example, the Riverhead Volunteer Ambulance Corps is exploring billing for service. According to The Riverhead News-Review, it could recoup over $2 million annually by charging insurance companies for the ambulance runs.

“It’s a win-win,” said Mr. Cammann. “The amount of third-party insurance money that the volunteer agencies do not get is staggering.”

The East Hampton Village Ambulance Association has never billed for its services. It is funded by local taxes. As a 501(c)(3) organization it also accepts donations. The 2022-23 proposed budget for the village includes $600,649 for the ambulance.

“Everybody is exploring billing for service,” said Mayor Larsen. “But that’s just not why we amended the certificate. It has nothing to do with charging for rides,” he said. He said a meeting was planned for later in January with the East End fire departments, at which experts would help determine if charging for service is feasible on the East End.

“The E.H.V.A.A. is a subcontractor for us. The way things were going, we were considering moving away from them and running the ambulance ourselves. They could stay in place and be a fraternal organization, but not a group that makes the rules,” he said.

“For example, I wanted to implement a driver program. But just to bring in drivers, the association has a rule that you have to be an E.M.T. to drive an ambulance. I think that’s silly and cutting out people who might want to volunteer. To get that through the association requires a change of their bylaws. My responsibility is to provide a service, but I have an agency that’s resisting doing things to make it better, resisting paid help. I’m hoping with new chiefs we can move forward.”

He used an analogy: “If you ask a plumber to fix some pipes in your house and they can’t fix the pipes, you hire a new plumber. It’s like that with the E.H.V.A.A. If we can’t get them to work with us, we have to figure out another way to run the ambulance.”

“It’s a matter of great pride and tradition with these folks who volunteer for the ambulance,” said Mr. Glynn. “To simply have the village take over control and have to tell them what to do, it’s not what volunteers turn out for. They turn out for the opportunity to serve.”