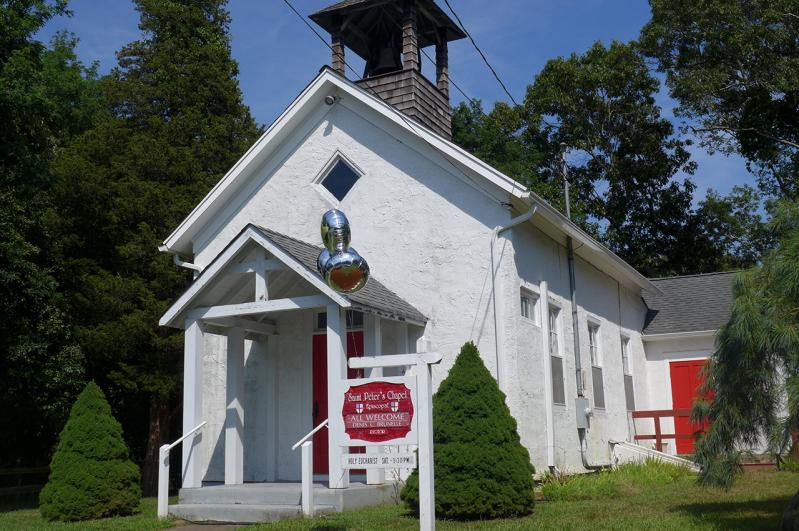 A proposal to install a cellphone tower on the grounds of St. Peter’s Chapel in Springs got a bad reception from the East Hampton Town Planning Board.
Jamie Bufalino
By Jamie Bufalino

A proposal from AT&T to build a freestanding 50-foot-high structure at St. Peter’s Chapel on Old Stone Highway in Springs, to house cellphone antennas and associated equipment, was discussed July 24 at a meeting of the East Hampton Town Planning Board.

In 2015, Cingular Wireless, now a subdivision of AT&T, sought to add a cell tower to the roof of the chapel by disguising it as a steeple. The planning board at the time did not approve the proposal.

“We are reviving the application,” said David Bronston, an attorney for AT&T. “It’s been four years of trying to come up with an acceptable solution for the planning board and the Architectural Review Board.”

The current proposal would cloak the cellular equipment in a campanile, or bell tower.

“This was the design urged on us by the A.R.B. and the planning board in lieu of a steeple or separate pole, which were not feasible or acceptable,” said the Very Rev. Denis Brunelle of St. Luke’s Episcopal Church in East Hampton, who is the rector of the chapel. AT&T would pay the church for using its property. The area around the chapel, said Mr. Brunelle, is a dead zone for AT&T and other carriers.

The antennas, Mr. Bronston said, would provide between half a mile and two miles of coverage.

“It seems like a lot of building for half a mile of service.” said Sharon McCobb, a planning board member.

In addition to approval from the planning board, the proposal would require variances from the Zoning Board of Appeals, including a special permit to build near freshwater wetlands.

“I’m not in favor of recommending the Z.B.A. grant the variances,” said Ian Calder-Piedmonte, who was one of the only board members who expressed a modicum of support for the proposal.

Randy Parsons, Kathy Cunningham, the vice chairwoman, and Samuel Kramer, the chairman, suggested the applicant explore an alternative suggested by the previous board; namely to add a utility pole to the wooded area of the chapel’s property.

As far as a campanile is concerned, Mr. Parsons recommended the applicant ditch the idea entirely. “I don’t see the point of us going down this troubled road,” he said. “Pursue an alternative that is likely to be fruitful.”

Also last week, the board discussed an application from the owners of 2.7 acres of land in Amagansett, adjacent to the northern end of the hamlet’s municipal parking lot, who are seeking a lot line modification from the East Hampton Town Planning Board prior to selling two acres to the town. Officials plan to expand the parking lot and create a public park overlooking the farmland there.

The property consists of three parcels. One lot, which is zoned residential, contains a single-family residence. Another, abutting the parking lot in the central business district, is vacant. The third, also in a residential zone, contains a barn and associated accessory agricultural structures, as well as a large farm field.

In a memo to the planning board, Tina Piette, the lawyer for Thomas Field and the estate of Herbert Field, the owners, said East Hampton Town had contracted to buy the vacant half-acre lot, as well as a separate two-acre parcel, in 2016. The sale of the half-acre parcel was finalized in 2017, said Ms. Piette, but the two-acre one, which would be used by the town for more parking and a park, is still pending.

The Fields are seeking to change the lot lines to retain a .7-acre parcel that contains the single-family home and the barn.

At a planning board meeting last Wednesday, Ms. Piette provided a detailed history of the property. Herbert Field, she said, had owned farmland adjacent to his other properties until 1981 when he sold it to Pete Bistrian, the late owner of a sand and gravel company.

With that sale, Mr. Bistrian, who had already owned the land on either side of Mr. Field’s farm, became the owner of a larger contiguous parcel that surrounded Mr. Field’s property.

“They never drew the lot lines,” said Ms. Piette. Therefore, she said, the exact boundaries of the parcels were not specified.

In 1991, Mr. Field, who wanted to separate his commercially zoned land from his residential parcels, sought approval for a subdivision from the planning board. The subdivision process took three years, said Ms. Piette, and “Mr. Bistrian never came forward to join in that process.” Had Mr. Bistrian questioned Mr. Field’s ownership of any of the land, she said, he had the opportunity to voice his concerns at that time.

The lot line modification now under review includes land the ownership of which has been clouded by the lack of official boundaries. Even so, said Ms. Piette, the sought-after modification would be beneficial to the Bistrian family, which inherited the land purchased by Mr. Bistrian, because it would disentangle the ownership. The family, which has been seeking to develop its property, has filed suit to force the town to construct an access road to the farm field from Windmill Lane.

“Whatever happens to the Bistrian lot, they’re not going to want it tied up with what we’re doing right now,” said Ms. Piette.

The board indicated it would approve the requested lot line modification, and will schedule a public hearing on the application.