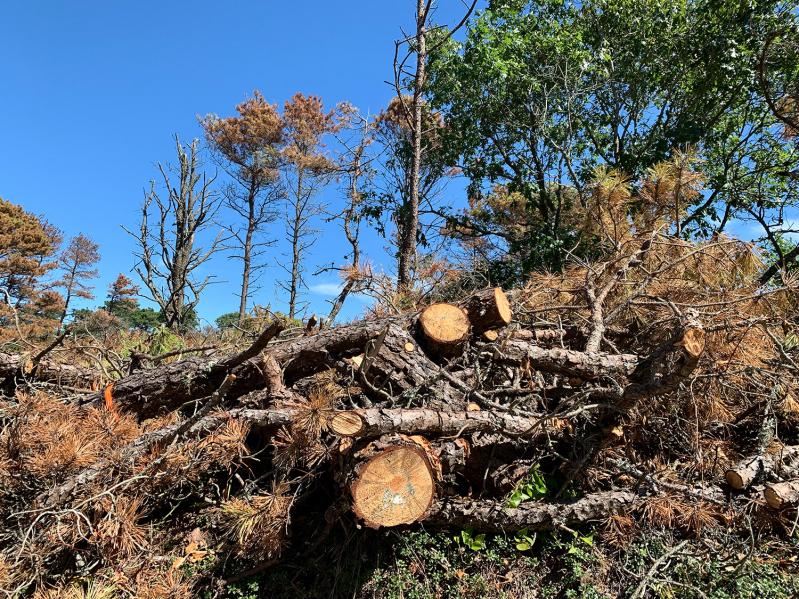 Thousands of pitch pines along Napeague that were devastated by a southern pine beetle infestation were cut down this week. The infestation is “like a slow-moving fire,” East Hampton Town Supervisor Peter Van Scoyoc said.
Durell Godfrey
By Christopher Walsh

Some 3,200 pitch pines on Napeague were being felled this week, victims of the southern pine beetle infestation that has killed thousands of trees in East Hampton Town since 2017.

In recent weeks, long stretches of trees along Montauk Highway had turned conspicuously brown, standing out from their green, as-yet unaffected siblings. East Hampton Town Councilman David Lys told the town board on Sept. 6 that loggers from the New York State Department of Parks, Recreation, and Historic Preservation would take down the trees this week. “It seems that the more we look, the exponentially more we find,” Yuriy Litvinenko, a biologist with the department, said in an email.

“It makes a big change on the [Napeague] stretch,” Mr. Lys said on Tuesday. The town’s Land Acquisition and Management Department was coordinating with the state and Assemblyman Fred W. Thiele Jr.’s office to develop maps of where the infestation had spread, he said.

The latest discovery of southern pine beetle infestation on Napeague followed the identification last winter of more than 1,200 infested trees in Napeague State Park. Southern pine beetles have previously infested trees in Northwest Woods in East Hampton and in Wainscott. A year ago, more than 500 trees around East Hampton Airport were found to be infested, most of them near Industrial Road.

The invasive beetle was first identified on Long Island in 2014. Affected pines, as well as those in a buffer zone around them, are cut down and removed to suppress the spread.

Until the heavy rain early on Tuesday, concern had mounted about the dead trees’ potential as fuel for forest fires amid the dry conditions. Some still had their brown needles; others were bare of all needles.

“All the dead wood laying there is a potential fuel source,” Supervisor Peter Van Scoyoc said. “We have Long Island Rail Road tracks adjacent. There have been a number of fires started by L.I.R.R. trains where the brake will get hung up on a wheel and cause sparks, igniting a fire.” Rainfall is significantly lower than average this year, he noted.

But the infestation itself, he said, is “like a slow-moving fire.” Any infested tree that is not cut down is likely to promote the spread of the insects.

Approximately the size of a grain of rice, the southern pine beetle is native to the southeastern United States but has been expanding its range up the East Coast, according to the State Department of Environmental Conservation. Climate change “has most likely contributed to this expansion,” according to the D.E.C.

All “hard” pine trees are susceptible to southern pine beetle infestation, according to the D.E.C.’s website. Adult beetles enter a tree through crevices in the bark and create tunnels in the tissue just beneath it, disrupting the flow of nutrients and typically killing the tree within two to four months. While most trees secrete resin that can repel initial attacks, “infected trees almost always die as their defenses are overwhelmed by thousands of attacking beetles.”