Candidates slam him, and Trump, at debate 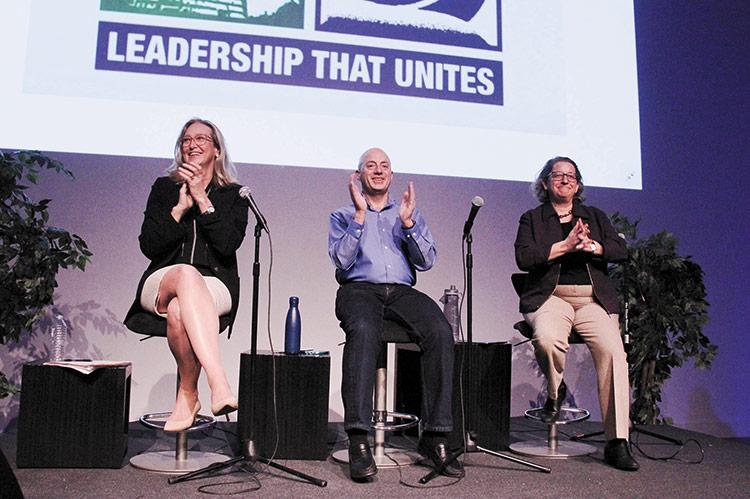 Suffolk County Legislator Bridget Fleming, Perry Gershon, and Nancy Goroff each made a case to be the Democratic Party’s nominee to challenge Representative Lee Zeldin during a debate on Monday at LTV Studios in Wainscott.
Durell Godfrey

The president of the United States was roundly vilified on Presidents Day, and the Democratic candidates who gathered at LTV’s studios in Wainscott were no less disdainful of the congressman they hope to defeat in the November election, tying Representative Lee Zeldin to what they characterized as an administration that is hurtful to Long Island residents.

It was a standing room-only crowd at LTV’s Media Center. The forum, sponsored by the East Hampton Town Democratic Committee, brought together Suffolk County Legislator Bridget Fleming, Perry Gershon, and Nancy Goroff, all seeking their party’s nomination to challenge Mr. Zeldin, who is running for a fourth term in New York’s First Congressional District.

Hand in hand with the candidates’ condemnation of the president and Mr. Zeldin, a fierce defender of Mr. Trump all through his impeachment, his post-acquittal purge of his critics, and his ongoing attacks on the Justice Department, were extensive discussions of the “pocketbook” issues on which Democratic candidates ran in 2018, when the party reclaimed a majority in the House of Representatives with a net gain of 40 seats.

In drawing a contrast between themselves and Mr. Zeldin, who they charged is usually absent from and not representative of his district, the candidates cited the elimination of the state and local tax deduction, which has burdened property owners in the district, transportation and infrastructure, affordable housing, and climate change. While professing admiration for one another, they also took a few subtle jabs in touting their own qualifications.

Mr. Zeldin, Ms. Fleming said, “has spent more of his time defending and protecting President Trump and all his offensive policies than he does looking at issues here on Long Island.” She cited her experience in the Legislature, to which she was re-elected for a third term in November. Her years on the Southampton Town Board, and 10 years before that as a prosecutor in the Manhattan District Attorney’s office, she said, position her as the candidate who can win. “The person who can take him on is somebody who has a record in local government that can form a contrast, that can show, ‘This is how you represent Long Island, Lee Zeldin, not by adhering to the president.’ ”

“The Trump presidency is dividing us and tearing us apart,” said Mr. Gershon, the Democrats’ 2018 nominee who lost to Mr. Zeldin by four percentage points. “And Lee Zeldin is Donald Trump’s number-one henchman these days.” Mr. Zeldin, he charged, “has given up on us, the people of Long Island. Our path to victory is to prosecute the case against Trump and Zeldin, and to establish the priorities that we stand for as Democrats.”

Mr. Gershon, who lives in East Hampton, said he has not stopped campaigning since his 2018 run. “I’m listening to what’s on people’s minds, concerns like, the cost of Long Island is too great and forcing people to move away.” The district needs affordable health care and housing, he said. “There are too many people who are uninsured, underinsured, can’t pay for their prescription drugs, and can’t make their co-payments. And our environment — we’re on an island, we’re challenged, and we have to step it up and protect our water and fight climate change.”

“Right now, we have a president, and a representative in Lee Zeldin, who have their priorities so upside down and backward they are hurting people,” said Ms. Goroff, a professor and chairwoman of Stony Brook University’s chemistry department. “Zeldin seems to think that his number-one job, the most important thing he has to do, is defend a corrupt president. . . . On issue after issue, he’s failed us. We deserve better. Maybe the reason that he’s been so bad at this is because he’s been so busy on Fox News, he hasn’t actually come to the district to listen to us.”

“It’s been almost three years since Zeldin’s last town hall meeting,” Ms. Goroff charged. “His office hours are a state secret. Only his supporters are told when and where they can find him . . . I find this personally offensive. How can he represent us if [he] won’t even listen to what we have to say?”

All the candidates slammed Mr. Zeldin’s 2019 “No” vote on restoring the state and local tax deduction that was eliminated in the Republican-led tax overhaul of 2017. “The SALT tax is number one on the list of how we help homeowners and families to survive here on Long Island,” Ms. Fleming said, noting that Mr. Zeldin declined to join the rest of the Long Island congressional delegation in last year’s effort to raise the cap to $20,000. “That would have solved the problem,” she said, “and he refused to do that because he’s sticking to the president and has lost sight of us here on Long Island.”

“We used to be able to fully deduct our property taxes,” Mr. Gershon said. “This Congress, and this president, just put a ceiling on how much can be deducted, and that hurts the middle-class homeowner on Long Island, and we need to do something about it and do it fast. And Lee Zeldin, just this past December, said it was more important to protect the Trump tax cuts for people who make over $500,000 than it is to protect the $100,000 earner who’s paying too much in property taxes.”

“We need to do exactly what Perry said,” Ms. Goroff agreed. “We need to get rid of the SALT deduction cap, we need to invest in affordable housing, and we need to work with local communities to find solutions.”

Climate change, Ms. Fleming said, is partly behind her bid for Congress. “I have a record that can put the lie to Lee Zeldin’s claims of being an environmentalist,” she said, touting the resolution she sponsored establishing a community choice aggregation task force in the Legislature, her work to reduce application of the mosquito larvicide methoprene over Accabonac Harbor in Springs, and shellfish aquaculture.

Climate change research can fuel development and jobs in the district, Mr. Gershon said. “By going backward like the Trump people have done in relaxing the regulations on coal, we’re not putting people to work . . . Once this president is not in office, we should be able to move forward.”

“We need to take urgent action, and there is an opportunity to have both economic development and environmental benefit,” Ms. Goroff said. “As a scientist, I have a unique opportunity to be a credible voice on this issue, and I think we need to have science at the table.”

The health care plans put forth by the various Democratic presidential candidates are similar, she continued, contrasting them with Republican efforts — including Mr. Zeldin’s — to repeal the Affordable Care Act, which all three candidates called a historic victory for Democrats. “It seems that the next step is to introduce the option of people buying into Medicare as the so-called public option in the marketplace that exists,” Ms. Goroff said. “We need to shore up the Affordable Care Act, and we need to make sure that people can buy into Medicare, or their employers can,” with the goal of universal coverage.

“We have to hold on to the things that are good about the Affordable Care Act,” Ms. Fleming said, including coverage for pre-existing conditions, while reducing premiums and prescription drug costs. “But let’s keep in mind, first of all, we’ve got to win CD-1, which is a purple district, and we have to make sure that we give people rational, realistic ways to get from where we are right now, where health care is not accessible to everybody, to where it needs to be, where it is.”

The candidates also criticized Mr. Zeldin for inaction on the Internal Revenue Service’s January announcement that Suffolk County grants for property owners to replace septic systems with nitrogen-reducing models is considered taxable income. “He hasn’t said a word since this I.R.S. letter came out,” Mr. Gershon said, adding that the congressman could have joined Representative Tom Suozzi and Senator Charles Schumer in pressing the I.R.S. to rescind that decision “and he chose not to do it, which is him showing where his priorities are.”

“This should never have been a problem,” Mr. Gershon continued, “but the Republican candidate for county executive” — John Kennedy, who is the county comptroller — “made it an issue . . . because he was trying to hurt [County Executive] Steve Bellone. In exchange for that, the I.R.S. has now screwed all of us, and we need to speak up and do something about it. You have to wonder if Zeldin’s relationship with Kennedy had anything to do with his silence.”

“We should stop these political games that Kennedy has started and that Zeldin has allowed to continue,” Ms. Goroff agreed. Ms. Fleming descried the Republicans’ “deeply, deeply cynical thing to do, just to undermine a very important environmental program.”

The National Rifle Association, Ms. Goroff noted, has given Mr. Zeldin an A rating every year he has been in office, and the congressman co-sponsored the Concealed Carry Reciprocity Act, which would allow anyone with a concealed carry permit from one state to carry a weapon in any other state, and on any federal land, such as national parks or national monuments, as well. “It’s terrifying,” she said. “We need to move in the opposite direction, and I think it’s a winning issue for us as well as a morally right issue.”

All three extolled their own qualifications as the most likely candidate to defeat Mr. Zeldin. Mr. Gershon cited the 128,000 votes he received in 2018, the name recognition he gained in that campaign, and the crowds turning out for his town hall events this year. “I’ve been on a stage with Lee Zeldin,” he said. “I’ve looked him in the eye. And in the last two debates, he left whimpering. That’s what I can bring to the table.”

Ms. Fleming spoke of the endorsements she has received and her relationships with elected officials, including Mr. Bellone, who was also re-elected last year, and Representative Kathleen Rice of New York’s Fourth Congressional District, who recently endorsed her campaign. “They know that I can win this,” she said. “We know that there is an opportunity here to get rid of the congressman who is no longer paying attention to us, and paying attention only to the president of the United States, completely disregarding what’s happening here on Long Island.”

“My background at Stony Brook, teaching and doing research there, gives me an opportunity to connect with people throughout the district,” Ms. Goroff said. “We are building the campaign to win.”

Mr. Gershon summarized the spirit of the event, stressing the common goal of defeating the president and one of his most ardent defenders. “We need to unite if we’re going to do that. So whether it’s me, or whether it’s Bridget, or whether it’s Nancy, we’ve got to come together as Democrats and make sure we beat Lee Zeldin.”

Mashashimuet Park's History and Future
A Conference for Young People to Create Solutions
Get Outside, Get Moving
END_OF_DOCUMENT_TOKEN_TO_BE_REPLACED