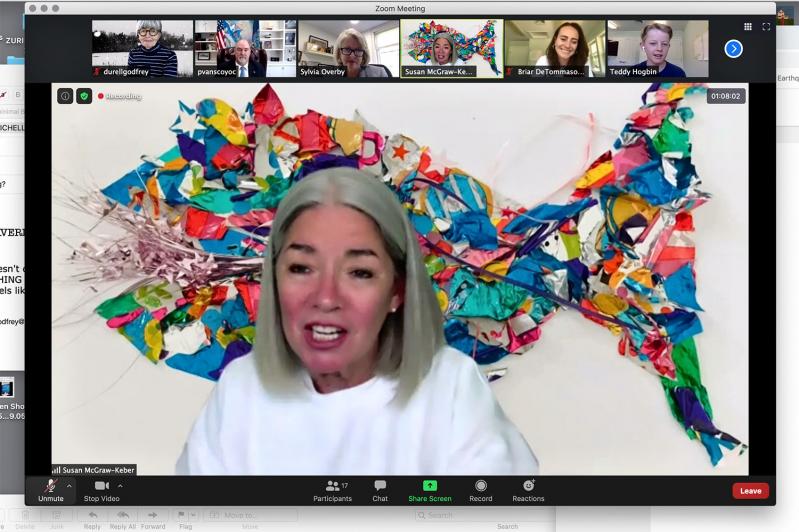 Susan McGraw Keber of the East Hampton Town Trustees urged the town board on Tuesday to enact a prohibition on gas and helium-filled balloons.
By Christopher Walsh

Two years after banning the intentional release of balloons, the East Hampton Town Board appears poised to go further by also enacting a ban on the sale and distribution of filled latex and Mylar balloons.

Susan McGraw Keber, a town trustee, was joined by several students and educators at the board's virtual meeting on Tuesday. A ban on balloons that are commonly filled with helium would represent "another step forward to make sure waterways and landscapes are avian and marine life-safe," she said.

Balloons are a popular accessory at celebrations like birthdays, weddings, and graduations, but their effect on wildlife can be lethal. Often mistaken for squid, jellyfish, or other prey, ingestion poses a major threat to marine mammals, sea turtles, and birds. Animals can also become entangled in the ribbons commonly affixed to balloons, which can cut deeply into their flesh or strangle them.

Although latex balloons are considered biodegradable, they will take anywhere from six months to four years to decompose "and they can wreak a lot of havoc before they do," according to the Environmental Nature Center, which cites the observation that balloons floating in seawater had retained their elasticity after one year. Mylar or foil balloons never degrade. (Mylar is the brand name for a type of stretched polyester film that is found in products including food packaging and is used as a protective covering, an electrical and thermal insulator, and reflective material.)

Ms. McGraw Keber noted that balloons, a single-use product, are among the top three deadliest forms of marine litter, according to Defenders of Wildlife. A slide presentation depicted balloons caught in trees, electrical wires, and an osprey nest, and littering landscapes and waterways, and showed participants in beach cleanups holding multiple deflated balloons.

Appearing remotely were David Cataletto and his sixth-grade class at the East Hampton Middle School, who voiced support for a ban, particularly of Mylar balloons. Teddy Hogbin, a seventh-grade student at Avenue Studios Hamptons, and Briar DeTommaso of Avenue Studios also spoke in support of a ban. Teddy created a petition to the board calling for a ban on the sale of gas-filled balloons.

"At the spring beach cleanup and survey, 195 balloon debris items were found over the mile of beach surveyed," says the petition, which is at change.org. "During a November survey, 309 balloon debris pieces over the same mile of beach were found and picked up," comprising just over 15 percent of the total debris collected. The petition had 153 signatures on Tuesday night.

Aubrey Peterson, adviser to East Hampton High School's environmental awareness club, read a letter from Gianna D'Agostino, a student, supporting a townwide ban, and Skye Tanzmann of the club reminded the board that helium is a nonrenewable resource. East Hampton, she said, does not need balloons to decorate or celebrate at the cost of environmental degradation.

"We heard loud and clear," Supervisor Peter Van Scoyoc told the students, noting that he often finds balloons floating in the water while on his boat. Referring to the 2019 ban on intentional release of balloons, he said that "this is the next step the board will look at." There are plenty of alternatives to balloons, she said. An outright ban, he said, would not represent "a huge detriment to the way we live."

The town board voted to ban the intentional release of balloons in February 2019. The Suffolk County Legislature voted to enact the same ban in September of that year. Proposed legislation to prohibit the release of balloons outdoors, with exceptions for manned hot air balloons and government-related experiments, is now before the New York State Assembly and Senate's environmental conservation committees.